Trying to conceive? There's an app for that. In fact, the fertility app space has never been, well, more fertile. Check out these eight fertility apps that could help you get pregnant.

We have an app for everything now, including baby-making. If you're TTC—that's "trying to conceive" for the newbies—and eager to get pregnant as efficiently as possible (and let's face it, in the age of Google Calendar, isn't that all of us?), these apps can help you with pretty much everything you need to conceive quickly, except for, ahem, doing the deed itself. That's on you.

So tap that App Store icon ... get ready, get set, conceive!

What it does: Hopeful moms-to-be observe and record fertility signs, which Fertility Friend uses to predict the best days for baby-making or taking a pregnancy test.

Cost: The basic app is free, but a $45-a-year premium membership gives you VIP access to message boards and advanced features like an intercourse timing analyzer and detailed analysis of your fertility signals, including those that may point to a potential pregnancy.

What makes it different: With 15-plus years of experience and 650,000 pregnancies and counting, Fertility Friend pioneered the concept of online fertility charting.

What it does: Glow pinpoints a woman's fertility cycle using personalized data to help them conceive faster.

Cost: Free with the option of signing up for a premium option ($48 per year or $60 for a lifetime membership) with charts, guided meditation for when things get stressful, and the ability to compare your symptoms to others going through the same process.

What makes it different: Glow is brought to you, oddly enough, by the co-founder of PayPal, Max Levchin. The app also engages men to take charge of their fertility, with new support just for them. Like the gals, men log data about their health, which is intended to reveal potential stumbling blocks to conceiving. A super cool feature is that a man's data can be linked to his partner's, to produce a full picture of your fertility as a couple.

What it does: Plugging your data into an algorithm that calculates and predicts your own unique cycle, Clue tracks cramps, emotions, skin, hair, sleep, sex, pain, moods, cervical fluid and more.

What makes it different: Clue improves your predictions with every tracked piece of your data (through cute emoji indicators), and is even optimized for Apple Watch.

What it does: Period Tracker takes the guess work out of when to expect a visit from your monthly friend and makes it easier to figure out when you are most fertile using simple data entry and charting.

What makes it different: Its tracking of ovulation, period, and PMS symptoms go uber micro, including dividing cravings into salty and sweet and showing levels of acne.

What it does: Ovia incorporates multiple fertility and key health indicators, like eating and sleeping habits, to predict ovulation and claims it can get users pregnant up to 3 times faster than the national average. Just ask its Harvard-educated CEO, who developed the app's proprietary algorithms to help him and his wife conceive.

What makes it different: The company says its algorithm is based on data collected from millions of women who are pregnant or trying to conceive, which it says is "the largest data set that's ever been collected on this population."

What it does: In addition to tracking your period and ovulation through charts, Kindara can monitor basal body temperature and cervical fluidto learn about hormone levels in your body and tell you the best time to conceive.

What makes it different: Kindara works alongside an oral thermometer called Wink, which retails for $129 and syncs automatically to the app.

What it does: The app uses data from a hand-held monitor, OvaCue, which measures saliva and cervical mucus to predict ovulation up to 7 days in advance. Because peeing on an ovulation strip is so 2014!

What makes it different: OvaGraph is teaming up with author Toni Weschler to become the official charting tool and community for her book, Taking Charge of Your Fertility. Weschler's Fertility Awareness Method, which is used in the charting logic, has helped millions of women conceive.

What it does: Daysy is a fertility monitor synced to an app, which learns from and tracks your menstrual cycle. Using daily oral temperature readings and data entry, Daysy claims to show if you are fertile or not with an accuracy of 99.3 percent.

What makes it different: The app makes it easy to share your fertility data with your mate. Hubba, hubba.

What's the most accurate fertility app?

The bottom line is that a lot of these apps do similar functions. But when you're trying to get pregnant, more information is good. Dr. Nathaniel G. DeNicola, chair of Telehealth for the American College of Obstetricians & Gynecologists, says there's clinically proven evidence that tracking your cycle improves your chances of getting pregnant. But he warns against putting too much stock in app companies' claims that they'll get you pregnant so much faster than another app (or pen on a paper calendar). There's not a lot of data collected on accuracy that's not done by the apps themselves.

"I wouldn't want a patient to see an app company promise them some stellar result that hasn't yet really been proven," DeNicola said. "Tracking basal body temperature, tracking cervical mucus thickness, those kinds of things can make the fertility tracking and timing of ovulation more accurate. The app connected to a vaginal thermometer, I can't really say we have a demonstrated benefit there."

But again, more information when trying to get pregnant is usually good. So pick the app with the interface that best suits your style and get tracking! 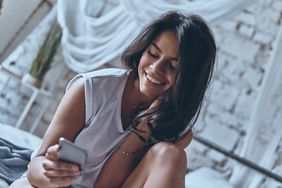 Why Am I Not Getting Pregnant?
25 Tips To Get Pregnant, According to Experts 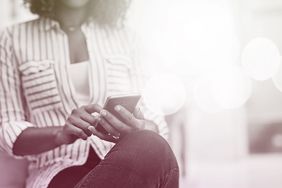