Provera can help with your fertility journey, but long-term use might interfere with ovulation. Here’s what to know about the link between Provera and pregnancy.

Provera is a prescription drug containing medroxyprogesterone acetate, a type of synthetic progesterone. Progesterone is one of the hormones that controls the menstrual cycle and ovulation, the monthly release of an egg from the ovaries. It also helps prepare the uterine lining for pregnancy and sheds the lining each month when conception does not occur (a process known as your monthly period).

Doctors sometimes prescribe Provera to treat menstrual cycle disorders. It might also be prescribed short-term for those trying to conceive with the fertility drug Clomid. That said, long-term Provera use can interfere with ovulation, pregnancy, and your monthly cycle. Here's what you need to know before taking the medication.

Why Is Provera Prescribed?

Taken by mouth, Provera is most commonly used to treat various disorders related to the menstrual cycle, which are often the result of a hormonal imbalance. These disorders include irregular or abnormal uterine bleeding, amenorrhea (lack of periods), excessive bleeding, and endometriosis, a condition in which cells that normally line the uterus grow outside the womb.

Additionally, Provera might be prescribed to induce a withdrawal bleed or a "period" in people who ovulate or menstruate infrequently, especially if they're trying to conceive, explains Michele Hakakha, M.D., a board-certified obstetrician and gynecologist based in Los Angeles and co-author of Expecting 411: Clear Answers and Smart Advice for Your Pregnancy. Provera can also delay menstruation, depending on a person's individual needs.

Doctors may prescribe Provera to people who are struggling to conceive. It's often taken in conjunction with the ovulation-stimulating drug Clomid (clomiphene citrate), which is used to treat infertility, according to Amy Roskin, M.D., J.D., an OB-GYN with Seven Starling. Clomid is typically started on day three, four, or five of a menstrual cycle.

So how does the regimen work? Say someone with irregular periods is trying to conceive. They usually take Provera for 10 days, and after that time, they can expect bleeding two to 10 days later. This artificial period helps dictate when to take Clomid to ensure ovulation, which increases your chances of conception.

Note, however, that while Provera helps regulate the menstrual cycle, it can also interfere with ovulation when taken long-term. "Typically, Provera is used for short periods of time in specific situations (for example, to bring on a period) and is rarely used continuously by people trying to conceive, as it can prevent ovulation and thin the lining of the uterus, making implantation of an embryo very difficult," says Dr. Hakakha.

Can You Take Provera While Pregnant?

The side effects of Provera are similar to pregnancy symptoms: nausea, vomiting, breast tenderness, and headaches. But if you become pregnant or are thinking about becoming pregnant while taking Provera, you should tell your health care practitioner right away, since it's not recommended for use during pregnancy. "When the drug is stopped, it causes withdrawal bleeding," says Daniel Roshan, M.D., a board-certified obstetrician and assistant professor at the New York University School of Medicine, who specializes in high-risk fetal medicine.

Provera isn't likely to cause miscarriage, so don't worry too much if you were taking it when you first became pregnant. But some studies have shown that there may be a link between certain birth defects in babies who are exposed to Provera during the first trimester of pregnancy, Dr. Roskin says. Provera has been classified as a category X drug by the U.S. Food and Drug Administration (FDA), meaning that it may be associated with birth defects or fetal risk and is contraindicated for use in pregnancy.

Can You Use Provera as Birth Control?

Provera is often confused with the long-term injectable contraception called Depo-Provera—but it's not the same thing. Indeed, although Provera may affect ovulation and impair fertility, doctors don't advise you to take Provera as a substitute for some other form of contraception because it does not prevent the release of an egg (ovulation).

"The oral pill form of Provera shouldn't be used as birth control. It doesn't prevent ovulation or pregnancy," Dr. Roskin says. "Depo-Provera is a stronger, long-acting injectable form of progestin which is an effective method of birth control. Depo-Provera does prevent ovulation and works well to prevent pregnancy." Your health care provider can help you determine which of these drugs would be the best fit for your individual situation. 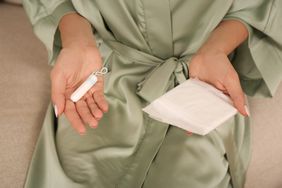 8 Facts About Your Menstrual Cycle and Conception