Polycystic ovary syndrome isn't well understood even by those who study it, but there are some things you should know.

Actress and singer Keke Palmer recently opened up on Instagram about a medical issue that has been attacking her "from the inside out" her entire life. In a 2019 interview for Health, new mom Lea Michele revealed that she struggled with acne and weight gain that she couldn't seem to control. Despite now having four kids, Victoria Beckham struggled to get pregnant with her fourth child and her doctors diagnosed her with a disorder that affects 1 in 10 women: polycystic ovary syndrome (PCOS).

It's what these three ladies—and millions of other women—have in common.

PCOS is a chronic and incurable endocrine disorder characterized by rare or nearly absent ovulation, elevated levels of androgens (male hormones that all females have but not typically in high quantities), and sometimes, many cysts in the ovaries. The imbalance of hormones can cause acne, weight gain, unwanted hair growth, infertility, and more.

The exact cause of PCOS still isn't known (though genetics, low-grade inflammation, and excess insulin levels all likely play a role). But symptoms and side effects—especially infertility—are well documented and often debilitating.

In fact, some doctors who diagnose women, even teenagers, with PCOS prematurely suggest that because of the condition, women may never be able to have children. It's a message that leaves many fearful that they'll never be able to conceive.

But the truth is, you can take charge of both your lifestyle and your fertility with PCOS. Here's what the experts have to say.

You Can Get Pregnant if You Have PCOS

It is absolutely possible to get pregnant when you have PCOS, says Rashmi Kudesia, M.D., a reproductive endocrinologist at CCRM Fertility in Houston. The issue is that with PCOS you don't always ovulate on your own, or you might do so irregularly, making it difficult to track your cycles. And if you can't track your cycles and don't know when you are ovulating, says Dr. Kudesia, it's difficult to get pregnant.

Sometimes, lifestyle changes such as diet and exercise are enough to kick-start regular menstrual cycles. "What we eat can affect our hormones, health, fertility, and mood," says Angela Grassi, R.D., founder of The PCOS Nutrition Center in Bryn Mawr, Pennsylvania and author of The PCOS Workbook. Grassi recommends eating foods that don't spike up glucose and insulin levels and help regulate hormones and lower inflammation, such as whole grains, beans, lentils, fruits, and vegetables. In addition, she adds, unsaturated fats (think omega-3s) could help lower androgens and even play a role in fertility.

Medical Interventions Can Help You Conceive

Of course, a healthy lifestyle isn't always enough to get your cycles back on track and help you get pregnant, says Alan Copperman, M.D., medical director at Progyny, and a fertility specialist at RMA of New York. So if you're having trouble conceiving naturally, even after making necessary changes, your doctor may recommend fertility medication to aid in ovulation. "While nothing is a guarantee, there are many roads to explore for pregnancy when diagnosed with PCOS."

Medications such as clomiphene and letrozole can stimulate ovulation. There are also injectable medications, called gonadotropins, that can stimulate the ovaries to develop mature follicles or ensure that the eggs are released and ovulated, says Erika Munch, M.D., a reproductive endocrinologist at Texas Fertility Center in San Antonio.

Intrauterine insemination (IUI), a fertility treatment that involves placing sperm inside your uterus, is another option, says Dr. Copperman. So is in vitro fertilization (IVF), which involves stimulating the ovaries with fertility injections, retrieving the eggs transvaginally, fertilizing them in a dish, and transferring an embryo or embryos into the uterus.

It's also important to note that some women with PCOS find it easy to get pregnant with a first or second child but then struggle with infertility in later pregnancies, something known as secondary infertility. If you experience one successful pregnancy but can't seem to get pregnant again, you may want to ask your doctor if PCOS could be playing a role.

This all brings us to another important point: Don't rely on PCOS to keep you baby-free. "Some women find with PCOS their fertility is not at all affected," Carolyn Cokes, M.D., an OB-GYN with the Metropolitan OB-GYN group, a Baltimore-based practice affiliated with Mercy Medical Center.

Want to stay baby-free and have PCOS? Consider hormonal birth control, which can help regulate hormones and menstrual cycles, which is important for health whether or not you want to become pregnant.

There's a myth out there that PCOS can extend your fertile window. That's because if you have PCOS, you might notice your cycle gets more regular as you age, says Dr. Kudesia. (You might go from not ovulating to spontaneously releasing an egg, for example.) This can make it seem like you're "more fertile" when really your cycle has just become more regular.

Whether you have PCOS or not, your chance of pregnancy in any given ovulatory cycle peaks at about 20 percent in your late 20s and drops about 5 percent by age 40, meaning that—in a best-case scenario—your chances of getting pregnant every month are 20 percent. 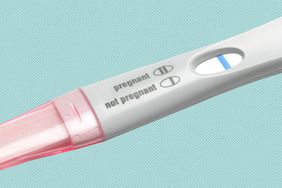