The intrauterine device (IUD) is one of the most effective forms of reversible birth control available today. Here's how copper IUDs and hormonal IUDs impact your future chances of conception.

The intrauterine device (IUD) is one of the most effective forms of reversible birth control available today—up to 20 times more effective than birth control pills, the patch, or the ring, according to the American College of Obstetricians and Gynecologists. But what happens when you decide that you want to get pregnant when you have an IUD? Keep reading to learn about getting pregnant after an IUD, including how this method of birth control impacts your future chances of conception.

How Does an IUD Work?

Selina Sandoval, M.D., a complex family planning fellow based in Kansas City, says that in order to understand your chances of getting pregnant after IUD removal, it helps to know how they work. There are two main categories of intrauterine devices: the copper IUD and the hormonal IUD. Both are small plastic T-shaped devices that are inserted into the uterus.

Copper IUD: This device releases copper into the uterus, which interferes with the sperm's movement—making it more difficult to reach an egg in the uterus.

Hormonal IUD: The hormonal IUD releases progestin into the uterus, which thickens cervical mucus and makes it harder for semen to get through. Continuous daily progestin exposure also thins the uterine lining so the uterine environment is less amenable to successful implantation.

But here's the key, according to Dr. Sandoval: Neither of the IUDs provide primary contraception by inhibiting ovulation, the way birth control pills do. "This is important because it means that when you place/remove your IUD, your ovulation should not be affected and you can become pregnant right away following removal."

How Soon Can You Get Pregnant After IUD Removal?

If you're hoping to get pregnant soon, know that fertility usually returns within the first menstrual cycle following IUD removal. "As soon as the device is taken out by your doctor, you could become pregnant," says Hilda Hutcherson, M.D., clinical professor of obstetrics and gynecology at Columbia University Medical Center, in New York City.

Because no hormones are involved with the copper IUD, your body doesn't have to readjust—after the device is out, sperm can swim normally again. Along those lines, most people with a hormonal IUD don't stop ovulating, so once the device is removed, they should be good to go. Consequently, there's no need to remove your IUD until "you are hoping or willing to get pregnant," says Dr. Sandoval.

Compare this to hormonal birth control methods such as birth control pills, patches, and rings. These release the hormones progestin and sometimes estrogen into the body, which prevents pregnancy by stopping ovulation. With these birth control methods, it could take up to three months for fertility to return. And the wait could be even longer if you've been getting the Depo-Provera birth control shot—occassionally up to a year.

If you don't get pregnant immediately after removing an IUD, don't panic. There are many factors that can impact your fertility, including your age, lifestyle, family history, and general health. "The process to get pregnant will be different for everyone," Dr. Sandoval says. "This is dependent on other factors that may affect your fertility but should not be affected by your IUD use."

Indeed, it takes the average young couple about 4-6 months to conceive, and after one year, approximately 85-90% of couples will get pregnant, says Melissa Esposito, M.D, a board-certified reproductive endocrinologist at Shady Grove Fertility Center in the Washington, D.C., area.

And if you're not 100% sure you're ready to get pregnant after removing your IUD? Make sure that you're properly using a backup form of birth control until you're ready for the possibility of pregnancy. The IUD is one of the best possible defenses against unwanted pregnancies, and once it's gone, so is the protection it offers. 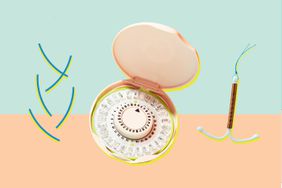