PregPrep is a two-step fertility system that's taking TTC market by storm and selling out after being featured in places like Good Morning America. But does it work?

Julia Dennison
Julia Dennison is the former Senior Editorial Director at Parents, leading the team of editors and content strategy. She was at Parents for seven years, from 2015–2022.
our editorial guidelines

If only getting pregnant was as easy as you thought it was in your early 20s. Instead, when you're finally ready to come off birth control, you're also ready to be pregnant, like yesterday. And when it doesn't happen after your first BCP-free cycle, the impatience sets in.

There are a number of known ways to speed up Mother Nature (or try to), but a new over-the-counter supplement has TTC women all over the country buying up stocks so quickly they're selling out. PregPrep, a two-step conception kit, costs $29.95 and has been around for two years, but it wasn't until a recent appearance on Good Morning America, coinciding with a national roll-out to CVS stores, that the fertility booster gained momentum.

A PregPrep Complete Conception Kit comes with two products: VitaPrep, a prenatal vitamin with folic acid, vitamin D, and vitamin B-12, and FertilPrep, which contains N-acetyl Cysteine (NAC), a mucolytic and antioxidant.

It's the second step that's the interesting part. Mucolytics have long been used by women eager to conceive to thin the cervical mucus so it's less sticky and therefore easier for sperm to swim to the egg. This isn't always in the safest way, with TTC women turning to cough medicine around the time of ovulation to improve their conception chances.

One of PregPrep's co-founders, Lara Oboler, M.D., a New York-based cardiologist, "stumbled across the idea that mucolytics (generally used to break up chest congesting that develops in respiratory illness) also thin cervical mucus," she says on the company's website. "I also realized the compelling fact that mucolytics work in opposition to the mechanism in many birth control pills, which use progesterone to thicken the cervical mucus and prevent sperm from reading the egg." So she gave them a try five days leading up to ovulation and soon found herself pregnant. And thus a baby and a product were born.

There are a number of studies that support the use of NAC to boost fertility. The dosage in FertilPrep is the same as a study that showed that women with polycystic ovary syndrome (a common cause of infertility) who took the nutritional supplement, versus a placebo, were three times more likely to get pregnant.

Kevin Jovanovic, MD, FACOG, associate professor of OB/GYN at Lenox Hill Hospital in New York says the dietary supplement "empowers patients who are trying to get pregnant" by allowing "them to take some of the mystery out of conception."

On the other hand, PregPrep's claims to boost fertility have not been evaluated by the FDA, and Laura E. Riley, MD, medical director, labor and delivery, at Massachusetts General Hospital in Boston, and author of You and Your Baby: Pregnancy worries the product may be promising too much. "I think the difficult part is that this is a vulnerable population who is likely to try anything to get pregnant," she says. "Furthermore many of them were going to get pregnant on their own but lots of times it is not on the time table they have set."

This baby-making business takes patience (and can cost ya). If a solution for less than $30 works, it would be a beautiful thing. But if you score a hole-in-one, just remember how lucky you really are!

Fertility Help: 11 Things to Try Before Seeing a Doctor 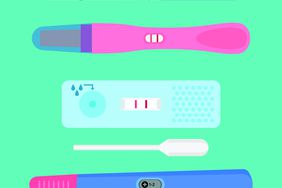