Is all sex created equal? Here's what experts have to say about your chances of conceiving with different positions.

Like most couples who are trying to conceive, you're probably wondering, "What is the best sex position to get pregnant?" Believe it or not, experts still lack conclusive evidence. "There's not a whole lot of science about which position is best for conception," says Sheryl A. Kingsberg, Ph.D., chief of the Division of Behavioral Medicine at University Hospitals Case Medical Center and a professor of reproductive biology and psychiatry at Case Western Reserve University School of Medicine in Cleveland.

She notes that it's more of a logistical issue than anything else. "It's very difficult to research specific sexual positions that might enhance fertility," Dr. Kingsberg says. That's partly because there are multiple other factors that affect odds of conception, such as age and timing of the intercourse (having sex while ovulating enhances fertility, for example).

But despite lack of proof, some sex positions might provide some advantages in the baby-making department. Read on to learn about the possible best sex positions to get pregnant, as well as what to do after intercourse to increase your odds of conceiving.

What are the Best Sex Positions to Get Pregnant?

These seven sex position might increase your odds of baby-making success. But keep in mind that what's most important is keeping up a consistent routine. "In studies about frequency of sex, there wasn't a statistical difference between rates of pregnancy for people who have intercourse every other day leading up to ovulation and those who do it every day," says Jani Jensen, M.D., a reproductive endocrinologist and assistant professor at the Mayo Clinic in Rochester, Minnesota. "Besides, trying to have it daily can be a huge chore."

The few studies that looked at coital connections hint that missionary position might offer a slim anatomical advantage. The theory: In partner-on-top, the cervix can dip more easily into the vaginal semen pool, giving sperm access to the protective cervical mucus. "There's no scientific data on that, though," explains Kelly Pagidas, M.D., a fertility specialist with Women & Infants Center for Reproduction and Infertility in Providence and an associate professor at Brown Alpert Medical School.

Plus, not all people are built the same way. "Having women on their backs makes sense for women who have an anteverted uterus, one that is tilted forward, which is about two-thirds of the population," Dr. Kingsberg notes. "But a third of women have a retroverted uterus, one that's tilted backward, so missionary wouldn't offer any advantage for them."

10 Things to Know If You're Having Sex to Get Pregnant

Some people simply don't like missionary style because it can be tiring for them. "The missionary position is more demanding for the top partner because they have to use their muscles to keep from putting their full weight on you, putting extra pressure on them," says Mindy R. Schiffman, Ph.D., a clinical psychologist and sex therapist at New York University's Fertility Center and in private practice in New York City.

In this case, couples can try a different position, such as doggy style. This popular sex position puts the woman on all fours with the man entering from behind. It allows for deeper penetration, which gives semen increased access to the opening of the cervix.

In this sex position, the woman places herself on top, facing away from her partner's face. The angle allows her to control the depth of the penetration for optimal effectiveness.

When engaging in this position, the couple faces each other while laying on their sides. Not only is it romantic (which may ease the nerves involved with baby-making sex), but it also allows for deep entry.

Get Pregnant Faster: Your 7-Step Plan

Like doggy style, this position involves the man entering from behind. The difference, though, is that the woman lies on her stomach and he lowers himself over her. Rear entry is a surefire way to get deep penetration.

Who says baby-making sex can't be a little adventurous? In this athletic position, the woman holds herself up with her hands while her standing partner grabs her legs, pulls them around his thighs, and enters her. Again, it allows for deep penetration and closeness to the cervix.

It's more likely that the very best sex position to get pregnant is, in fact, your favorite one. It doesn't matter if you're twisted like a Bavarian pretzel or lying still as a statue, as long as your partner gets the job done. And if it provides a toe-curling climax, all the better! "There was some research that a woman's orgasm did help move semen into the uterus terms of the contractions," Dr. Kingsberg says. But she cautions against stressing if you don't regularly climax. "Honestly, there's so little science behind it that we don't want to put pressure on women to have to reach orgasm."

20 Things All Couples Should Do Before Getting Pregnant

How to Improve the Odds of Conception After Having Sex

The optimal postcoital routine is another aspect of baby-making sex that's up for debate. Most experts question the advice that you should lie still on your back for 30 minutes after having sex, yet others swear by it.

Our view: If you've got time to lounge, why not enjoy the afterglow? Propping yourself up on a pillow or putting your legs up the wall, however, have not been shown to make a difference. "Once the ejaculate gets inside you, the sperm is already in the cervical mucus, which works to hold sperm there for fertilization," Dr. Schiffman says.

There is one other thing factor that can influence your chances of conception: lubricant. Regular lube has been shown to negatively affect sperm survival. Look for versions that marketed as "fertility-friendly" or "sperm-friendly," and make sure they don't contain spermicide.

9 Best Pregnancy Sex Positions from the Pregnant Kama Sutra
25 Tips To Get Pregnant, According to Experts 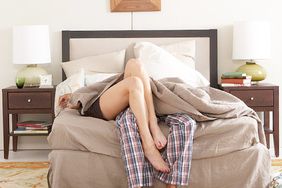