Book series are pure magic: If your kid falls for the first volume, they'll race to the next. Get rolling with these entertaining gems nominated by teachers and librarians. (Flashlight for reading under the covers not included.)

The clever concept—each book is warmly told from the point of view of a different student at Carver Elementary School—exposes readers to a variety of family circumstances. "The series tackles serious issues like prejudice and bullying with thought and care," says children's librarian Betsy Bird, who blogs at A Fuse #8 Production. But its relatable references to soccer, video games, and other common kid activities keep it from feeling like a downer. Six books, ages 6 to 9

Written and illustrated by Abby Hanlon

A modern Junie B. Jones, the 6-year-old title character charms young readers with the adventures of her make-believe friends and her relentless pursuit to get her older siblings to want to play with her, says Parents advisor and fifth-grade teacher Colby Sharp, cofounder of the Nerdy Book Club. Pencil illustrations, some with speech bubbles, draw in readers. Five books, ages 6 to 8

Wanna-be architects, scientists, and even presidents will find delightful role models in this STEAM-focused picture-book series. While each book focuses on a different character, all have rhyming couplets and spirited illustrations that show the fun process of problem-solving and the importance of trial and error: "Your brilliant first flop was a raging success! / Come on, let's get busy and on to the next!" Heads-up for older kids; there are fun chapter-book spin-offs. Four books, ages 4 to 8

In this joyful, reassuring series, a second-grader solves typical kid problems like getting separated from her parents when they're shopping, and spilling on her clothes. Faruqi, who was born in Pakistan, integrates the country's customs into the plots. Full-color illustrations throughout make this series even more engaging, says Parents advisor Jennifer Serravallo, author of The Reading Strategies Book. 12 books, ages 5 to 8

In the main character's family, boys are raised to be shapeshifters while girls become witches. But 13-year-old Aster challenges those gender constructs, striking a chord with nonconformists. Deep themes, social issues, and symbolism are embedded throughout but are not difficult to grasp, says Serravallo. Colorful, easy-to-follow panels make this series a good pick for comic newbies. Three books, ages 8 to 12

With a Netflix show in the works, it's prime time for kids to dive into this British fantasy series that kicked off a decade before Harry Potter. Set in a medieval world, woodland creatures go on quests that pit good against evil. The stories are also famous for their mouthwatering feasts that readers can practically taste through Jacques's magnificent descriptions. 22 books, ages 8 to 12

Written and illustrated by Rhode Montijo

You've got company, Violet Beauregarde! Gumchewers everywhere have a hilarious new heroine in Gabby Gomez, who pops a bubble so big that it gives her the superpower to stretch really far. Short chapters, zany plots, and vibrant graphic-novel-style illustrations make this series a shoo-in for your little bookworms. Five books, ages 6 to 8

It's rare for an early chapter-book series to be laugh-out-loud funny and also include uplifting, powerful messages about family and friendship, yet this series delivers on both fronts, says Liv Hanson, youth content curator at the Chicago Public Library. In the first book, two rat brothers pull pranks to show their dad, a forklift driver, that they're as fearless as he is, but their plans backfire and they end up helping people instead. A heart-to-heart with their father helps them realize that kindness is what makes people stronger, a theme continued throughout the series. In Dad's wise words, "Life is tough enough. We might as well try to make it easier for one another whenever we can." Five books, ages 5 to 8

A pinch of magic helps the science go down. A spunky heroine with a cat sidekick discovers that wondrous creatures (merhorses and dragons, oh my!) arrive at her barn when they need help. To solve problems, like how to get the mold off a monster's fur, Zoey puts on her Thinking Goggles, makes a hypotheses, and conducts experiments—all in a truly engaging way. The result: "A fantastically imaginative experience that's slyly educational," says Amber Ankowski, Ph.D., coauthor of Bringing Up Bookmonsters. Eight books, ages 6 to 10

Written and illustrated by Elise Gravel

This gem of a nonfiction early-reader series piques kids' interest with humor, fun lettering, and narration by the critters themselves, says Amy Sears, a children's librarian in Teaneck, New Jersey. Sure, kids will soak up the wacky facts—spiders carry their eggs in a silk purse! a toad eats its own skin!—but the overall vibe is entertaining, not gross. Ten books, ages 5 to 8 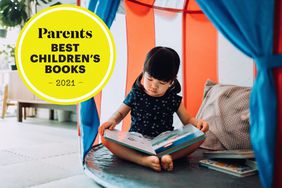