Photos of sleepy newborns with whimsical backdrops are all over social media, but experts warn parents not to attempt these set-ups at home. Here's what you need to know to keep your L.O. safe during a newborn photo shoot.

In April 2010, a pediatric cardiologist named Sam Hanke fell asleep with his four-week-old son on his chest. When he awoke several hours later, his little one had died, a victim of Sudden Infant Death Syndrome (SIDS). The heartbreaking story has become a cautionary tale that experts want parents to bear in mind when cooing over images of a newborn snoozing on his or her father's chest—or on any surface, on their stomach.

"There's a huge issue with the way [newborn] sleep is portrayed both in the traditional media and, now in social media," says Benjamin Hoffman, M.D., chair of the American Academy of Pediatrics Council on Injury, Violence and Poison Prevention. "We almost don't even see it anymore. I often refer to it as the 'Anne Geddes effect.' We're so used to seeing babies sleeping in pumpkins. But it is so important that we acknowledge how crucial safe sleep is for babies and what a big deal sleep-related death can be."

But unsafe sleep positions are just one of many concerns experts have when it comes to newborn photo shoots. Here, what every parent should know about keeping their little one safe when looking to capture this special time in their lives.

Many Pinterest-Popular Positions Aren't as They Appear

Photo shoot set-ups that pop up on social media sites like Pinterest and Instagram are often the result of careful photo editing. Take, for example, seemingly serene photos of a baby lounging in a hammock or laying on a swing. A responsible, professional photographer will not actually position an infant in a dangerous hammock or swing. Instead, they shoot the baby on a safe surface, then separately photograph the props, and edit it all together as a composite image.

"The hammock one is fairly popular, and for that one, they’re actually not hanging at all," explains Cassie Clayshulte, a newborn photographer in South Carolina. "They’re laying flat on what we call a poser, which is usually a very safe, soft surface for them to lay on, and the hammock is stretched backwards." Clayshulte then takes the photo from a "bird's eye view" and edits it so it looks as though the little one is lounging in the hammock.

With a similar set-up involving a swing, Clayshulte says the baby and the swing are shot separately and then edited together.

Clayshulte points out that often, a baby is positioned in a way that is fully safe. Perhaps they're being held by their mother, and then, the mother's hands are edited out in post-production.

The Danger of DIY Photo Shoots

From specific props to Photoshop, many "tricks of the trade" go unnoticed by people who only see the final product and assume it's safe to DIY these positions. "If you’re doing those poses without the safety training, and you’re not doing it as a composite, you really can strain on baby’s joints," Clayshulte says. "You can put strain on their airways and even on their circulation. And you can also put strain on their spine and neck if you’re not doing things correctly, because they really are so fragile. They’re still developing and still growing, and so we don’t want to pinch any of those nerves or block their airways or hurt their circulation system or anything like that."

Daniel Ganjian, MD, a pediatrician at Providence Saint John’s Health Center in Santa Monica, California couldn't agree more. "It is always important to make sure your child's airway is patent (open and clear), so he/she can breathe easily," he notes. "When the head is flexed too much, it makes it more difficult for a baby to breathe. There are too many images showing babies with their chins on their chests which makes it difficult to breathe." Another issue: Photos of babies in wrap-around carriers that show their heads "too flexed," Dr. Ganjian says.

The AAP's "Back to Sleep" Recommendation Applies to Photos, Too

With an eye toward the SIDS risk that's associated with a prone sleep position, Dr. Ganjian discourages both parents and photographers from creating an image in which a baby is sleeping on his or her stomach—or appears to be.

"This will teach viewers that babies are allowed to sleep on their stomachs, which is not true—prone sleeping is very dangerous," he says, pointing to the AAP's recommendations on safe sleep, which advise parents to "place the baby on his or her back on a firm sleep surface such as a crib or bassinet with a tight-fitting sheet" and "avoid use of soft bedding, including crib bumpers, blankets, pillows and soft toys. The crib should be bare."

The Safest Bet: Photos That Show a Newborn in a Non-Perilous Position

Behind-the-scenes tricks allow photographers like Clayshulte to safely create an artistic rendering. But the safest approach is to steer clear of sensationalized images that portray hazardous situations and only photograph newborns in safe positions, according to Dr. Hoffman.

"The more that people see these images that are potentially dangerous, the more it normalizes it, and then, the likelihood is that babies are going to be put in dangerous situations," he says, noting this holds true even if the scene is Photoshopped. "So, what's the cost of cute then?"

When planning a photo shoot, he advises parents and photographers "to use common sense" and to ask themselves the question, "Where is a safe place for baby to be doing something that a baby would normally do?" They'll also do well to consider set-ups that show "babies in situations where a parent or caregiver would be comfortable with the level of supervision that's portrayed in the photo," Dr. Hoffman notes.

Sure, photographing a baby in an AAP-recommended position—alone on his or her back—might make you think, "Oh, that baby looks so alone and sad," Dr. Hoffman says. "We project our feelings around that and our sense of what makes us feel cozy as adults when we sleep," he says. But it's important for parents to recognize that there's a real difference between that and what's safe for a newborn.

How to Find a Trustworthy Newborn Photographer

When booking a professional photographer, Clayshulte recommends parents do the following:

No matter how many likes or repins a newborn photo might wrack up on social media, or even how beautiful an image might look framed on a gallery wall, safety needs to come first. Dr. Hoffman implores parents to remember, "Babies are not show horses. It comes down to common sense and not taking pictures of your baby in a situation where it represents the baby in any peril." 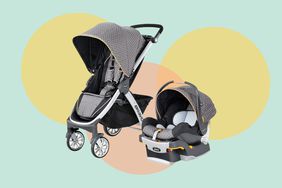