He's trained NFL stars and top Hollywood celebrities, but at today's Child photo shoot, Boston-based yoga guru Baron Baptiste faces a different type of tough customer: rows of 4- to 8-year-olds from local public schools, all ready to twist themselves into poses with names like Warrior and Downward Dog. And this is no group of novices, either: For these elementary schoolers, this is gym class by way of the Baptiste Power Vinyasa Yoga Institute.

Sound unusual? Increasingly, schools are buying up yoga mats the way they once stocked up on dodgeballs. Kids' yoga is a hot commodity -- instructional books and videos aimed at little ones line store shelves. "We're at the beginning of the trend," says Mariam Gates, director of Baptiste's program for children, KidPowerYoga. "Within the next five to 10 years, yoga in school will be the norm." Though statistics aren't yet available, Gates believes that many schools nationwide have already incorporated yoga into their curriculum, benefiting hundreds of students. And it's not just for "big kids" -- many preschool programs offer classes for the youngest yogis.

As yoga for children surges in popularity, Baptiste and Gates remain central figures in the movement. As co-owner of Baptiste's Boston studio, Gates helped shepherd the growth of his kids' classes. Praise for the method spread throughout the city, and in 2001 educators in the Boston school system approached Gates about bringing Baptiste's classes to their physical education programs. "They were interested in setting up a pilot program for fourth-graders to help them deal with the stress of standardized tests," she recalls. Enthusiasm ran so high that some administrators made room in already-tight district budgets for the classes -- which replace gym or are offered as electives -- so parents wouldn't have to pay. In other schools, motivated parents, members of the yoga community, and teachers helped Gates find funds through grants and PTA sources.

KidPowerYoga proved to be such a hit that the classes expanded to include all grades and were also adopted by a number of suburban schools. Educators are thrilled with the results. Darcelle Lowe, a teacher in Dorchester, says the difference yoga makes in her students is striking. "The classes are so calming. If my kids spend a morning doing yoga with Mariam, they're more relaxed and better able to focus for the rest of the day." And Baptiste is very proud of the everyone's-a-winner attitude yoga instills in kids. "When they're doing yoga, children can work at their own level -- there's no pressure to perform here," he explains.

As peaceful and centering as yoga is, students also benefit from its physical strengthening, since maintaining the poses requires plenty of effort from young muscles. What's less obvious to little ones is that they're also learning skills that will help them deal with everyday life, says Baptiste. Achieving that mind-body connection allows children to stay cool while coping with anything from tests to peer pressure. "Yoga teaches kids 'alert tranquility.' The children are relaxed, but not dull, because they're concentrating," he explains. Or, as 6-year-old Caroline Lucchina puts it, "I love yoga because it warms up my body -- and then I can do anything!"

Yoga for Mom and Baby

Copyright © 2003. Reprinted with permission from the September 2003 issue of Child Magazine. 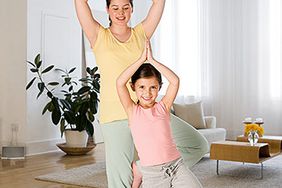 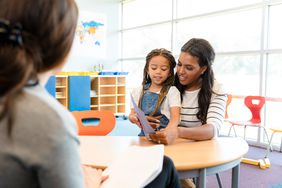