Collette Parker’s family bakes chocolate chip cookies every time there’s a full moon. “We spend at least a few minutes munching cookies and sitting outside looking at the moon and the stars,” says Parker, of Covington, Georgia.

Father of two Jay Leslie hosts neighborhood movie nights on Fridays in the summer. “We have a cheap projector with a built-in DVD player,” he says. “The kids spread out on blankets or tuck up onto a parent’s lap. As it gets darker, I make a fire in our fire pit.”

Each December, families visit Colonial Williamsburg for the town’s Grand Illumination. It’s a tradition that started with the colonists, who used nighttime gunfire and fireworks to celebrate everything from a governor’s election to birthdays of leaders. (The next event, on December 8, 2019, will feature street concerts and fireworks displays at the Capitol, Magazine, and Palace.)

“Parents think they need to do something big to make memories, when the little actions and rituals you do together tend to stick in a child’s mind,” says social psychologist Susan Newman, Ph.D., a mom of five and author of Little Things Long Remembered. “It can be as simple as having ice-cream sodas on Sundays.” And if that one doesn’t work for you, here are tons more ideas from other families.

Dana Aderhold and her husband, Brad, created a Star Wars– inspired send-off for their 4-year-old son, Hagan, when he was anxious about starting preschool. They held up one arm as if they were holding a lightsaber, and Hagan did it in return. “We told him it meant that the Force was with him until we picked him up,” says Aderhold, who lives in Raleigh, North Carolina. “He found this reassuring, and so did we.”

Heather Larson, of Cedar Hills, Utah, and her daughter, Kate, make an “X” with their pointer fingers and then an “O” with both hands to send each other kisses and hugs. The gesture started when Kate was having a tough time after a family move. “I asked her what she needed, and she responded, ‘I need hugs,’ ” Larson recalls. “My heart broke, so I told her if she was ever feeling empty and needed some love to give me this special sign.”

The Trinidad family, of Cherry Hill, New Jersey, squeezes one another’s hands three times as a signal for “I love you.” They do it as part of the bedtime routine and on other occasions, says mom Josicar Trinidad. Just imagine doing this ritual on your child’s wedding day as she walks down the aisle.

Dana Anderson and her 12-year-old son, Andy, created a goodbye tradition based on their favorite holiday movie, Elf: They do a fist bump, put their thumbs up, touch thumbs, and then sing, “I love you! I love you! I love you!” Says Anderson, of Indian Rocks Beach, Florida, “It adds a little humor and love to our school drop-off.”

When Lynnae Allred, of Mapleton, Utah, was little, her parents had a hard time getting the kids to bed, so they made it a game. “Our dad would sit on the side of the bed and ask what kind of machine we wanted him to be,” she recalls. “He could turn into a squeezing machine, a tickling machine, a poking machine, or a kissing machine—I loved all of them!” She’s passed on the tradition to her kids and grandkids.

Louis Armstrong’s “What a Wonderful World” soothes Trinidad’s daughter, Magdalena, at bedtime. “I danced to that song with my dad at my wedding, and I’ve been singing it to Magdalena since she was born,” Trinidad says. “Now that she’s older, we take turns singing to each other.”

When my kids were in preschool, I’d tell them stories with a main character who sounded a lot like them. For instance, my daughter, Stella, heard, “There once was a girl named Sasha. She had red hair, blue eyes, and toenails painted pink.” These look-alike characters always end up in the same situations as Stella, so she loved to hear their adventures.

Channeling Goodnight Moon, Audrey Monke and her daughter would say good night to pictures of the girl’s grandparents, the tree outside the window, and the different objects in her room. “We would end by saying good night to each stuffed animal in her bed,” says Monke, a summer-camp director and a mother of five in Clovis, California, “Then we would give each other a big hug.”

Allison Abramson, of Chester, Connecticut, uses guided visualization to help her three children clear their mind. “I started by telling them to close their eyes and imagine that they were swimming with a mermaid or having a picnic in a field of flowers,” she says. “After we had done it for a while, the kids began adding details. Now they often make up their own stories. It’s a cozy, connected time.”

When Amy Milcic’s son Smiley was 3, he asked why the family couldn’t celebrate 12 days of Smiley like they do 12 days of Christmas. That’s when a new tradition was born—the family from Saxonburg, Pennsylvania, hangs a paper chain with 12 links before someone’s birthday. On each day, they remove a link, and every family member says something nice or shares a memory about the birthday celebrant.

Every year around their birthday, Christy Nielsen, of Pittsburgh, asks her four children questions and videos their answers. She’s been doing it since they were toddlers. “Through the interviews, you get a sense of who they really are at each age,” says Nielsen, who blogs at HarvardHomemaker.com.

Some families use a red or pewter plate with the words “You Are Special” to celebrate birthdays, accomplishments, or even good behavior. But you don’t need that plate to start this tradition; any unique piece of tableware will do. Monke’s family, for example, uses a “piggie plate,” a ceramic plate with a pig on it. Other families use a blue plate and call it the “Blue Plate Special.”

Mom of four Amy Cagliola Smith, of Worcester, Pennsylvania, sets out a stack of index cards at every birthday party and asks each guest to write down what they like about the birthday girl or boy. The recipient can choose to read the cards out loud at the party or look at them privately later. It’s become such an anticipated tradition among the family’s friends and relatives that when someone can’t come to a party, “they still write a compliment and give it to me,” Smith says.

When the Leslie family, of Louisville, Colorado, is having a proud moment, one of their kids will shout, “Hula-Hoop hugs!” “We all put our arms around each other and hug in a circle and then move our hips as if we’re Hula-Hooping,” says Jay Leslie, founder of Dudedads.com. “Smiles, laughs, and warm fuzzies usually follow.”

Michelle Barneck, of Salt Lake City, grew up with this cheer, and she has carried it on with her family of five: “We say, ‘Together, forever, through all eternity. Barneck, Barneck, Barneck family!’ and then do a group hug,” explains Barneck, who blogs at ALittleTipsy.com. “My little guy loves to do it right before bedtime.”

Milcic takes handshakes to a new level by having a different one with each of her five boys. “We started off simple when they were toddlers,” says Milcic, who blogs at RockYourHomeschool.net. Now they’re a series of elaborate moves, like hand slaps, elbow grabs, whole-body spins, and chest bumps.

In this classic ritual that President Barack Obama’s family used when they were in the White House, each person shares the best and worst part of their day. If you don’t like focusing on the lows, ask your fam to share two good things from the day instead.

“At the dinner table before we eat, we always hold up our glasses and say, “Cheers! Thank you for our family!” says Christi Gray, of Charlotte, North Carolina.

Sarah Rudell Beach loves hearing what her two children are thankful for each night. “Their responses give me a precious window into their inner lives,” says Beach, of Minneapolis. “The first time we did this, my daughter smiled sweetly and said, ‘My family.’ I turned to my son and asked, ‘What are you thankful for?’ Without batting an eyelash, he replied, “Hot dogs.’”

“To say goodbye in the morning, I walk out of the house, close the door behind me, and then shake my booty at our two youngest through the glass part of the door,” says Rich Robles, a father of four in Charlotte, North Carolina. “They both respond in kind with a shake of their own!”

Ticia Messing, of Austin, who blogs at AdventuresinMommydom.org, lets her three kids collect every pillow, cushion, and soft item in the house for a giant, fort-like nest in the family room. “Part of the fun is that a lot of the pillows are upstairs, so they throw them or ride them down the stairs,” Messing says. “Then they bring down all their stuffed animals and arrange them just so. We sit in the middle of all that and watch movies.”

“We love the Captain Underpants movie, and there is a song in it called ‘Saturday,’ ” says Smith.“So every Saturday morning, the last person who’s sleeping gets bombarded. All of us go in their bedroom and wake them up with the Saturday song.”

Melissa Sumrell, of Montpelier, Virginia, adds an unusual twist when she has tea parties with her four daughters. They start out ordinarily enough. But when Sumrell yells “switch,” the bad manners come out! “We burp, slouch, put our feet up on the table, and just act ridiculous,” Sumrell says. “Then I say ‘switch’ again, and we revert right back to good manners. The kids think it’s hilarious.” 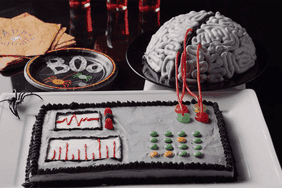 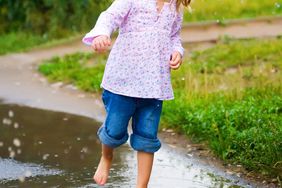 30 Little Things That Mean a Lot to Kids