10 Places You’re Not Disinfecting Regularly but Should

You already know to disinfect the remote and the toilet, but what other germy spots in your house should you sanitize regularly?

At this point, when you catch a cold or cough, you barely have to think about your game plan: Stock up on chicken soup, pick up some Robitussin to help relieve your symptoms, and disinfect shared surfaces like the remote control so your kids don’t get sick. But are you disinfecting all the surfaces you should be? Where do germs really lurk anyway?

To collect information about germs, researchers from NSF International, an organization based in Ann Arbor, Michigan that develops public health standards and certifications, asked 22 families to each swab 30 common household items. They used cotton swabs that were saturated with a sterile liquid that helped pick up germs and tested an area on each item that was roughly 3 inches by 3 inches. The researchers tested for Coliform bacteria, a family of bacteria that includes Salmonella and E. coli (bacteria that can cause gastrointestinal problems). 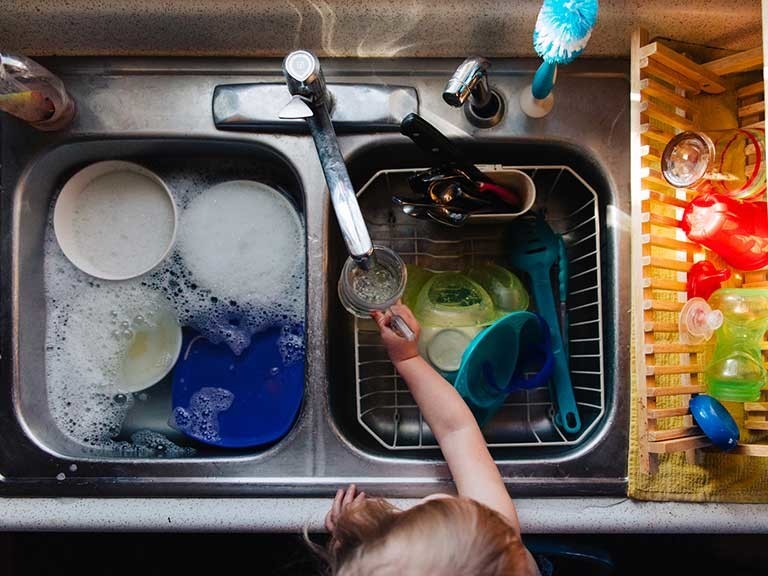 The key finding, which may surprise you, is that the kitchen was the germiest room in the house—not the bathroom. Getting more specific, these were the particular items that had the highest germ counts, overall, in order:

Household items that were the least germy and ranked lowest on the list included keys, money, computer keyboards, and bathroom light switches.

Why Some Items are Germier Than Others

Germs can live on most household surfaces, but areas that are warm or moist tend to harbor more germs, which explains why sponges top the list. You may have heard that microwaving a sponge is a good way to clean it, but a recent study found that microwaved sponges aren’t any cleaner; the bacteria that survive a microwaving quickly regrow to previous levels. A safer plan, though it'll cost you more money, is to replace your sponge every week or so. And squeeze as much water as you can out of it when you're finished using it so it dries out more between uses.

Most of the other top-10 items should be regularly sanitized (no less than once a week, and more often in high-traffic areas) with a clean cloth and disinfectant spray, a bleach solution, or soap and hot water. As for pet toys and rags, throw them in the washing machine, set the water temperature to hot, and use either a chlorine bleach (if the toy is white) or a non-chlorine, hydrogen-peroxide bleach (if the toy is colorful).