Don’t worry, there are ways to fix it. 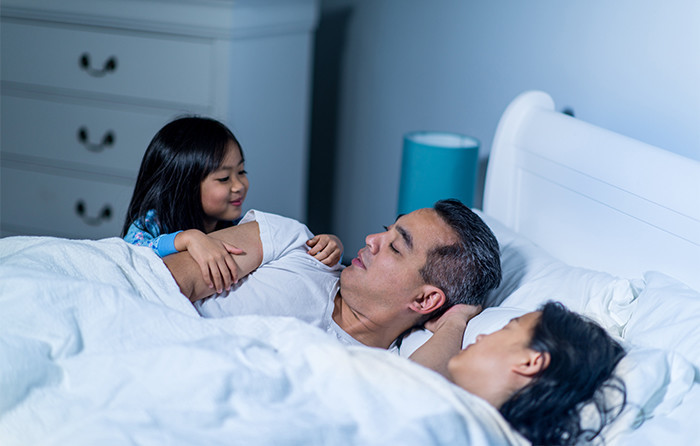 It won’t come as a surprise to any new parent to hear that having a baby messes with your sleep. But a new large study shines a nightlight on just how big that impact is.

First, the part that won’t really surprise you: researchers found that when moms have their first child, they report a drop in both sleep duration and satisfaction; fathers experience this too, although less than moms do. Similar effects were felt after having a second or third child as well. But here’s where it gets, well, interesting.

While the worst sleep happens in the first three months after birth on average (also not surprising, since this tends to be the peak of infant crying, frequent middle-of-the-night feedings, recovery from childbirth, and, you know, getting used to this brand-new human), adult sleep doesn’t bounce back quickly. In fact, the researchers found that both parents report lower sleep duration and satisfaction for four to six years after the birth of a child. They believe the lingering issues may be due to the worries, strains, and changes in duties that come with being a parent.

Before you start crying, some good news: It doesn’t have to be this way. There are things that you can do to help everyone—parents and kids—get better sleep at night.

Start a bedtime routine early. The sooner you have a pre-sleep ritual that you do with your child, the stronger they will connect those actions and feeling sleepy. “Over time, the baby does learn that those cues mean it’s time for bed,” Lauren Broch, PhD, a sleep specialist and psychologist at Northwell Health Sleep Disorders Center, says. Some of her suggestions for a routine: Offer a feeding, give a bath, read a book, and sing a little song. Hopefully, they’re calming for both of you.

And don’t forget about a bedtime routine for you. Your kids aren’t the only ones who need to wind down before bed! Avoid looking at your phone or other screens–if the temptation is too strong, charge these devices in another room. Instead, try to do something quiet and relaxing, like reading a book or trying a five-minute meditation. Remember that your bed should just be for sleep and sex, so do those relaxing activities away from your bed.

Try not to reinforce nighttime wakings. Being too engaging with your child when they wake up at night can help them associate waking up with fun—and that’s the last thing you want. Broch recommends cutting down on even hugging and kissing them when they wake up, because that’s engaging. Stick to the basics: Get them a cup of water or change their diaper, and put them right back to bed.

Get out of their way. “The way a baby or toddler falls asleep is really important to how they will behave when they wake up,” Broch says. If you hold them until they fall asleep, they will wake up and want you to hold them again. She recommends letting them learn how to self-soothe. “This can sometimes include some crying, but it’s usually just a few nights and you aren’t harming your baby,” Broch says. (Head here for more tips on setting their bedroom up for a good night’s sleep.)

Get them moving. Former Bachelorette contestant Tanner Tolbert tries to wear his kids out during the day so they’re tired at night. “I’ll chase my daughter around, or we’ll go play in a nearby park in the afternoons,” he says. “Playing hard leads to serious zzzs.”

Keep your pain at bay. When you’ve spent all day toting around bags of baby gear and a heavier-by-the-day kid, your body might have some new aches that make it tough to sleep. Tanner takes AdvilPM to help keep pain from keeping him up. Worried about not hearing your kid crying in the night? Don’t fret! It won’t knock you out the way a prescription sleep aid would, explains sleep specialist Michael Breus, PhD. If you’re still worried and have the option, just make sure your partner doesn’t take a sleep aid for the first time the same night you do and have them be the point person in case your child needs anything.

Set your bedroom up for optimal sleep. You can’t stop your kid from waking you up in the night because they had a nightmare. But you can stop light and outside noises from waking you before it’s time to get up. Consider investing in blackout curtains, or even just an eye mask. A white noise machine or fan can also drown out outside sounds (for you and your kids), and make sure to keep your room cool.

Go with long-term solutions. Having a 2-year-old climb into your bed in the middle of the night is a recipe for sleeplessness. “People think the only way they can get a toddler to go back to sleep is to bring them into their bed, but I’d challenge them on that idea,” Broch says. “It’s the easiest way to get them back to sleep, but it’s a short-term fix that creates a long-term problem.” Be consistent here—allowing them into your bed even sometimes reinforces the behavior—and walk them back into their room. Remember, you don’t want to associate the middle of the night with fun.

Reinforce your own bedtime. It’s understandable to want a little time to yourself after the kids go to bed, but don’t go overboard. “I used to give myself a little too much me-time and found myself staying up way too late!” Tolbert says. “Now I try not to overdo it. I go to bed not too much later than the kids do.” Parents need bedtimes too!