It's hard enough being a twin parent. Stores and restaurants shouldn't make it harder.

An accomplished writer and editor, Marah Eakin has worked in entertainment media for over 12 years. She spent over a decade on staff at The A.V. Club before branching out into the freelance world, writing for publications like Vulture, The Ringer, Input, Uproxx, Kindling, USA Today, Parents, and more. Her beat is everything from Sundance to The Price Is Right. Marah holds a Bachelor's of Science in Magazine Journalism from Ohio University, as well as a Masters in Cultural Studies In Education, with a focus on children's media. Prior to her writing gigs, she worked as a publicist in the music business. She lives in Pasadena, California with her husband and their rowdy twin toddlers.

About four years ago, while pregnant with my now toddler twins, I took a class at our local hospital specifically designed for twin parents-to-be. What sticks out to me about that class now are the little tips our instructor—both a twin herself and married to a twin—gave us. Always sing "Happy Birthday" twice on your twins' birthday, once for each kid. Alternate who goes first each year. Spend individual time with each of your kids on their own. And when the thousandth person in line at the grocery store says, "Double trouble! Having twins must be twice as hard," tell them that it's probably four times as hard but only twice as expensive.

What that class didn't prepare me for, though, was how hard it would be to take my twins out into the world with ease. While stores and restaurants have made some concessions and accommodations for families, most seemingly haven't thought about how to accommodate parents with multiples—whether it's twins, triplets, and sometimes just two young kids close in age.

When my kids were smaller and still in car seats that strapped to their stroller, I'd try and take them to stores like Target. We always needed diapers, after all. What I'd never anticipated was how hard it would be finding carts to fit my twins. In short, good luck getting those diapers with your kids in tow.

I mentioned this struggle to another friend with older twins, and she sympathized, saying she was an early adopter to grocery delivery services just because she couldn't handle the stress of pushing two kids around the store. "I would push one cart while I pulled the other one," she said. "You've got four hands to try and always keep away from grabbing things off the aisles, too." Her final straw came when her son pulled a jar of spaghetti sauce off the shelf, and it splattered all over the floor.

While some stores do have double carts for kids, not all stores do—and often there are so very few, even when they have them. Near where I live in Los Angeles, only about a quarter of the stores offer double carts. I've had to entertain fussy kids many times near the front doors of our local Target while we waited for someone to drag one in from a far-flung cart corral, or for some family to meander through the checkout line so that I can swoop in and finally snatch the cart. And let me add, the carts that are offered are usually broken, dirty, or missing one if not both seat belts. It's enough to put a parent off taking their kids shopping anywhere, which is a real shame considering how much stuff twin parents need.

Even ordering items online can be fraught for twin parents. Another twin mom pal told me that she struggled to keep her kids in the diaper brand she desired because, when she joined, the site wouldn't let customers have multiple subscriptions for kids who were two different sizes. "For months we were trying to juggle, 'How many size three do we need? How many fours?' she said, bemoaning the fact that she'd often end up discovering too late that she didn't quite have enough for one of her kids.

Restaurants are another struggle. My husband and I once tried to take our kids to an early New Year's Eve dinner, making sure that we called the restaurant in advance to ensure they had highchairs. Sure, they did, they said. When we arrived, we discovered that they had a highchair, singular, meaning we were forced to turn around, pack our kids back into the car, and head home disappointed. The same thing has happened with hotel cribs, too, and don't even get me started on hotel rooms often not even having enough floor space to support two Pack 'N Plays simultaneously.

For me, the only way through all of this is planning. I try to make sure I only take the kids to the grocery store when my husband is also with me. If something goes awry, we can always push two carts. I'm an avid Yelp scroller when it comes to restaurants, and I'm a big advocate of calling ahead and asking more questions than you think you might have to. I use all the knowledge I've gleaned from my mom friends and ask lots of questions. When we went to Europe when the twins were smaller, for instance, I made sure to ask around about what types of strollers people thought I should bring, including what would fit through doors and navigate cobblestones. It's a process that can be mentally exhausting and, frankly, one I really wish I didn't have to do.

I constantly struggle to understand why so many stores, restaurants, and services have chosen to do less than the bare minimum when it comes to supporting families with multiples. More than 3 percent of babies born today are twins, and that's not even considering triplets, quadruplets, and beyond. Retailers that do actively think about how families differ can reap big time rewards—twin parents are loyal, and we network—but only if they're willing to put in the time, money, and brainpower. 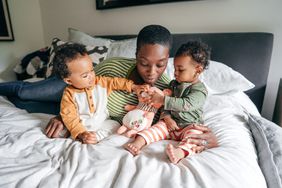