Turns out, getting a little one to sleep when you have his older sibling's schedule to contend with isn't as impossible as it seems.

By the time I sleep-trained my 18-month-old daughter three years ago, I was a swirly-eyed zombie. I vowed that if I ever had a second child, I'd follow the pros' advice to a T—put my newborn down drowsy but awake from the start, resist responding to the first whimper, and cut off midnight "snacks" by 6 months. I'd have one of those 12-hour-a-night unicorn babies you hear about but never actually witness.

Flash forward three years. My daughter sleeps like a champ. Her 13-month-old brother, Lyle? Let's just say he's no unicorn. Rocking him back to dreamland for the third time one recent night, I wondered how we went wrong...again.

It's no mystery to Kim West, an Annapolis, Maryland, sleep coach and coauthor of The Sleep Lady's Good Night, Sleep Tight: Gentle Proven Solutions to Help Your Child Sleep Well and Wake Up Happy. She says slumber issues often become even thornier when it's your second or (Lord help you) third time around. "It's a lot harder to 'nap when your baby naps' when there's a second kid running around, because who is going to take care of child #1?" she says. Add to that dueling nap schedules that feel more like a game of whack-a-mole, and come nighttime, you're too pooped to even consider the drowsy-but-awake thing and will use any crutch to get your little one down and keep him down, lest he wake up an older sibling snoozing across the hall—or in the same room.

Real Moms on the Sleep-Training Methods That Worked for Them

Thornier, yes. Unsolvable? Not a chance. We hit up West and other sleep pros with the biggest challenges that arise when helping baby #2 fall asleep (and stay asleep) on her own. Overcoming them is surprisingly easy if you're armed with the right tricks—especially if you appoint your big kid your sleep-training deputy.

Goal: Develop a bedtime regimen for the baby and toddler.

Your older kid may be a junkie for routine, but her baby brother hasn't had time to get hooked. So go easy on yourself—and just have the little guy come along for the ride—especially if you're the only parent at home, suggests Parents advisor Jodi Mindell, Ph.D., author of Sleeping Through the Night. Until the sibs can share a tub, the younger one can hang out in a bouncy seat while you wash the older one, who can then apply her own (carefully doled-out) lotion as you bathe the baby. Once they're in PJs, prop them both on your lap and feed the baby as you read bedtime stories. "A newborn doesn't care if he's listening to chapter books or board books," says Dr. Mindell, associate director of The Sleep Center at The Children's Hospital of Philadelphia. As she gets older, help your big kid "read" to her little brother.

Here's where your toddler may have to take a backseat, temporarily. For babies, "the most important part of any bedtime routine is putting him down in the crib just before he falls asleep," says Judith Owens, M.D., Parents advisor and director of sleep medicine at Children's National Medical Center, in Washington, D.C. If you need help easing your infant into a routine—and especially if you're trying to correct a stubborn sleep regression in an older baby—consider enlisting a friend or a relative to lend a hand for a few days while you get the younger one through the rough patches.

If you don't have such help, though, you can always try a little TV (think a calm show or movie). Although a flickering screen can suppress your toddler's melatonin production--leaving her wired at the least opportune time--"you have to work in reality," says Dr. Mindell. This period won't last forever, after all, and once both kids can conk out independently, your reality will get a whole lot happier.

Goal: Figure out the best time to move the baby into her big brother's room.

Ideally, she should be snoozing fairly well through the night for three to four weeks before she makes the move, according to West. However, babies are notoriously light sleepers with short sleep cycles—and are more socially aware every day—so they'll stir at the slightest whisper, smartphone-screen flicker, even your scent as you walk into the room. And let's face it, you're more likely to hear and respond to her whimpers when she's right next to you.

To prevent wake-ups from a noisy or sleep-talking sibling, put a white-noise machine next to your baby's crib. Harvey Karp, M.D., Parents advisor and author of The Happiest Baby Guide to Great Sleep, discovered that low, rumbly sounds work best (so that's exactly what he offers on his nearly two-hour-long CDs). It might also help to set up a simple, foldable screen beside the crib.

Then you're ready to start sleep training. If your quarters feel too close for full-on cry-it-outs, West recommends a modified version of her Sleep Lady Shuffle technique: Spend the first two or three evenings putting your baby down at bedtime awake, comforting her from a chair next to her crib—and going back to that chair to soothe her during night wakings. "Pick her up only if she's hysterical," West says. On the fourth evening, move the chair a few feet away and do the same for the next few nights, continuing until you're on the other side of that visual barrier and finally comforting her from the doorway.

Goal: Keep your older kid asleep when your baby cries at night.

After spending two tearful years helping my daughter fall--and stay--asleep independently, I wasn't about to let my new baby ruin all that hard work in a few nights. I might have resisted becoming an all-access pacifier to my infant if I'd known this: My preschooler actually spends a fairly large percentage of the night in deep sleep, says Dr. Owens. Sure, another white-noise machine placed near her bed can't hurt. "But it takes a lot to wake a sleeping child," even if the siblings share a room, she says.

If you don't believe your kid will snooze through all the squawking, bring her onto your team. Prepare her for a week or so of sibling crying by saying something like, "We're going to teach Jack how to be happier and sleep better," Dr. Karp advises. You might keep her out of the fray by planning a few nights of "sleepovers" with whichever parent isn't on baby duty. Or send her to Grandma's for the weekend. Meanwhile, back at your infant's crib, be sure he's going down sleepy (but not asleep) at bedtime. Comfort him crib-side or sweetly say goodnight and leave the room. Either way, remember: Allowing him to fuss a little at the start—when everyone's still awake—means he's more likely to put himself back to sleep in the middle of the night with minimal drama.

Goal: Leave the house with a toddler and baby who nap at different times.

Fleeting as this period is, nothing makes time stand torturously still like a day spent playing nap relay with two kids. That's why Dr. Mindell gives parents of two or more children a sanity pass. "With your first child, 75 percent of his naps should be in the place where he sleeps at night," she says. In other words, lying down in a dark, quiet room rather than bumping along in a stroller or a sling. She promises child #2 will do just fine if his figure hovers closer to 50 percent, while you make Target runs, shuttle his older sibling to playdates, and sneak out to the park for a little vitamin D. Whenever possible, try to time your outings so that at least a portion of those on-the-go naps are stationary—for example, you could park your infant's stroller while your toddler plays on the jungle gym and then has a snack on a nearby bench.

Goal: Prevent a big sib from barging in while getting the baby down for a nap.

Much as you beg your big kid to please stay quiet for 15 minutes--and even as she promises she will--the little kid's brain isn't quite wired for self-control yet. And until that happens, her brain is very much wired for bribery. Dr. Karp suggests handing your older child four paper passes just before putting your baby down. If she interrupts you before the baby is asleep, she has to give you a pass. At the end of the day (or week) she gets a sticker for every pass remaining. You can also try reserving a special toy—or a box of rotating activity books and quiet games--for the older sib to play with while you put the baby down, recommends Dr. Mindell. And of course, your second is likely to become better at just tuning out noise.

Goal: Get ZZZs yourself!

Even if the big sister has outgrown naps, she may surprise you if you shut down any noise and dim the lights. "I was always a stickler for quiet time," says West. "Once my girls stopped napping or on those non-nap days, I'd still set aside quiet time, for them to slow their body and their mind. It was great for all of us," West remembers. Consider chilling on the couch with a book while your older child occupies herself with sticker books or her dolls. In a pinch, you might ask a relative or a responsible neighborhood high-schooler to play with your older child for a couple of afternoons a week. "A 15- to 20-minute rest can be enough to recharge your batteries, says Dr. Owens. Any longer than half an hour, and you'll go into a deep sleep that will leave you feeling groggy instead of refreshed.

At night, give yourself permission to save evening chores for tomorrow, and make a promise to yourself to hit the sheets right after your kids do. After all, chronic sleep loss has been linked to diabetes, weight problems, and even car accidents—not to mention all-around crankiness. And remember that this is a short-term problem, adds West. "If the laundry and dishes pile up, we're still going to be okay." 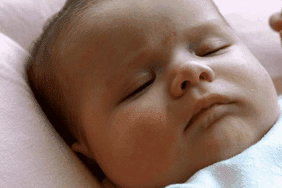