Your little one might do some quirky things, such as swallowing things they shouldn't or inserting items into their nose. Find out when this behavior warrants a trip to the emergency room.

When you daydreamed about being a parent, you probably conjured up reveries of snuggling with your little one before bedtime, giggling together in the bath, and making goo-goo faces as you pushed the stroller around town. Checking that the pennies they ingested came out the other end—not so much. But this strange kind of stuff actually happens quite often.

"Young children are constantly exploring," says Joseph Wright, M.D., professor of pediatrics, emergency medicine, and health policy at George Washington University Schools of Medicine and Public Health, in Washington, D.C. "They're curious about their body and everything around them, so whatever they can reach is fair game for investigation."

Most of the time, these bizarre predicaments work out just fine, leaving you with nothing more than a funny story to embarrass your child with when they're grown. But there can sometimes be serious consequences, which is why we created this guide to oddball baby emergencies involving foreign objects. Enjoy a chuckle (our tales all had a happy ending), but remember our advice so you'll know what to do if a similar hitch happens to you.

Swallowing Something They Shouldn't

It's not news that babies and toddlers like to learn and soothe themselves by putting things in their mouth, but some of the stuff kids swallow can amaze even the experts. Leslie Mihalov, M.D., chief of emergency medicine at Nationwide Children's Hospital, in Columbus, Ohio, recalls an X-ray that showed 30 or so small marbles—the kind often used to decorate flower vases—sitting neatly in a child's digestive tract.

The immediate danger, of course, is that the object will block the airway. And if it's stuck in the esophagus, it can irritate the lining or compress the neighboring trachea. In most cases, whatever your child swallows will eventually make an exit. "Once it's entered the intestines, it's likely to simply pass through," says Dr. Wright.

Certain objects cause doctors extra concern: Button batteries can erode quickly, damaging the lining of the digestive tract. Sharp items can cause a laceration. If your child swallows more than one magnet, they can spur the intestines to become kinked or twisted, which may lead to an obstruction.

Eating too much of something that's not meant for munching at all—such as sand or loose carpet fibers—can also have consequences. Jim Schmidt, M.D., once treated a kid who ate so much sand that it congealed into a ball and got stuck in his stomach. Not exactly a day at the beach!

My Toddler Swallowed a Penny or Another Foreign Object—Now What?

It's OK to wait a day or two for the object to pass as long as you haven't seen symptoms and your baby hasn't swallowed a battery, magnet, or anything sharp, says Dr. Mihalov. But if they start to drool excessively, choke, vomit, or have abdominal pain, take them to the ER immediately. If the culprit doesn't come out in their diaper, they'll likely need an X-ray to see if it's jammed in the digestive tract.

"You never know what a child might find to stick somewhere, so it's important to always be on alert," says pediatrician Jennifer Trachtenberg, M.D., author of The Smart Parent's Guide to Getting Your Kids Through Checkups, Illnesses, and Accidents. Keep objects that could fit through a toilet-paper tube out of reach, and offer your infant a pacifier if they have a penchant for sucking on nonedibles. Do a couch check at night, and remove any small items stuck in the cushions. It's also smart to childproof generally baby-free zones like your home office (staples for snacks, anyone?). And just in case, take an infant CPR class (or study our first aid instructions below as a refresher).

Putting Things Up Their Nose

Amanda Green, of Oran, Missouri, can clearly recall when her then 18-month-old daughter, Makinzy, began using her nasal passages for storage. "First it was bits of the Halloween decorations. Then she started in on her sister's beads, which we thought we had kept out of reach. We could tell because her nose looked bigger on one side." In one week, Green says, they went to the E.R. four times to have the beads extracted. "The doctors wrapped her in a blanket so she couldn't squirm and used tiny forceps to pull them out. Once, they removed three beads. It was only when we got home that I realized they had missed one!"

Although there's a slight risk of choking, an infection is the chief concern. "An object buried deep in the nostrils can block the nasal secretions, and the nostrils may then become laden with bacteria," Dr. Schmidt says. If your child has a runny nose coming from only one nostril—possibly accompanied by a strong odor—there's a good chance something's up there.

As long as your baby is cooperative and you can see whatever is hiding out in their nostril, you can try to remove the castaway with flat-tipped tweezers. Just be careful not to push it farther into the nose. Some items, especially food such as bread or beans, can expand with moisture, so you may need to use a bulb syringe to suck them out. No luck? Call your doctor or go to the E.R.

Remember to keep small objects out of reach, and if you catch your kid primed for nasal explorations, explain emphatically that she should never put anything up their nose. It's for smelling, not stuffing!

Inserting Objects into Their Ears

Tammy Forrest, of Saginaw, Michigan, thought it was cute when her then 15-month-old daughter, Bailey, started holding her toy cell phone to her head and saying "hi," but she began to worry when that wasn't the only thing going near her ear. "Almost anything will find its way in, whether it's a raisin or a scrap of paper," says Forrest.

After noses, ears are the most popular places for babies to bury their treasures. "They're trying to figure out how different items feel, and think nothing of shoving part of their lunch into the ear canal," says Dr. Schmidt.

Pushing on an object in the ear canal can cause it to become lodged deeper and may puncture the eardrum. If the object stays in too long and bacteria builds up, that can also spur an infection.

Other than small batteries, which can cause damage in a matter of hours, an item in the ear rarely requires an emergency room trip, says Dr. Schmidt. It's fine to visit the pediatrician, who will use special tools to remove it.

The same rules you follow to prevent choking apply to ears too. And always supervise your tot at mealtime to make sure finger foods go in the correct orifice.

Was this page helpful?
Thanks for your feedback!
Tell us why!
Related Articles
My Toddler Swallowed a Penny—Now What? 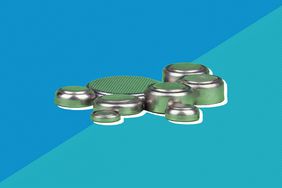 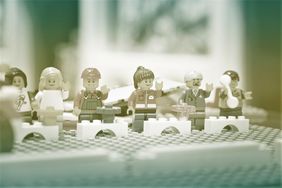 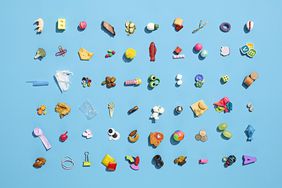