Postpartum anxiety hits Latina moms especially hard, yet many suffer in silence. It doesn't have to be that way. Here, fours mothers share their struggles and how they found the help they needed.

Every new mami frets, but postpartum anxiety disorder (PPA) takes it to the next level. Unlike postpartum depression, which is characterized by extreme sadness, PPA can cause mothers to feel a heightened sense of worry or uneasiness that goes well beyond occasional baby-focused jitters—“Am I making enough milk?” Many times, these intense fears can involve physical symptoms—shallow breathing, a cranked-up heart rate, trouble sleeping—that make caring for a newborn difficult.

If all of this sounds familiar, it’s probably because Latinas are 50 percent more at risk of experiencing a mood disorder such as PPA from the time they become pregnant to when their child turns 1, compared with 12 to 19 percent of the general population. The reasons for the disparity are unclear, and the causes can be many. Stress—whether due to a difficult pregnancy, money woes, lack of health care, or lack of trust in your doctor—can pave the way.

Culture also plays a role. “Marianismo, the belief that women should be silent and self-sacrificing in their suffering, can make Latinas feel pressured to take care of others at the expense of their own self-care,” says McClain Sampson, Ph.D., codirector of the University of Houston Center for Latina Maternal & Family Health Research. And the mental-health stigmas still prevalent in the Latino community don’t exactly encourage women to speak up about postpartum anxiety. Well, these four women are putting an end to that! Read on as they share their emotional journeys through new motherhood.

I always dreamt about becoming a mother and had a romanticized view of what my experience was going to be like. I pictured myself cradling my baby bump with pride and feeling a sense of peace that I was finally at this stage in life. But those expectations didn’t quite live up to the reality when I became pregnant three years ago. My postpartum anxiety actually began while I was pregnant, which I later learned is the case for 25 to 35 percent of women.

During that stressful time, my mind would just wander and pick any little thing to worry about. If my train home stopped because of traffic, I’d freak out, imagining a bomb threat. My heart rate would increase, my hands would get sweaty, and I would feel like running outside and not stopping. Later in the pregnancy, when you’re supposed to count the baby’s kicks, it was torture. Did he kick? Did I feel it? Is he okay?

The Importance of Counting Kicks During Pregnancy

My husband sensed that I wasn’t the same and, with help from his sister, who I’m very close to, encouraged me to see someone. I called the NYC Well hotline, which is available 24/7, and they sent me a list of therapists in my area. On my first visit, I was very reserved. I actually suggested phone consultations. Knowing that it was just a voice at the other end helped me open up.

Once Lucio was born, the worries continued, so my therapist suggested we talk twice a week. Since I wanted to avoid medication, she taught me several natural ways to ease my anxiety: deep-breathing exercises, yoga, guided meditation on YouTube, and a few drops of lavender or a calming mix of essential oils on my wrists. Although my anxiety might never go away entirely, it’s much better today, and I’m able to manage it. I’m truly a stronger person after this experience. It’s made me more mindful and self-aware, which allows me to be a present, patient, and loving mom for my son.

“I realized I needed to take care of myself again.”

I was born in Mexico and have been in the U.S. for the past decade. Back home, a new mother is encouraged to take time to rest and care for herself. Here, you’re expected to keep up an exhausting momentum after birth: There’s pressure to get your pre-baby body back, excel in your career, and be there for your husband and friends.

After Diego, now 2, was born, I insisted on returning to how life was before he came along. I even went back to work three weeks after giving birth. Everyone constantly said how awesome I was, but I didn’t feel that way. Bringing a human into the world is terrifying. You can read as many books as you want, but nothing prepares you for taking care of another person.

I was already in a state of panic while pregnant, having previously experienced two miscarriages that made me worry that something could go wrong at any minute. Those fears only got worse after giving birth. Even though Diego was healthy, everything scared me. Was I holding his neck properly? Was he eating enough? That constant anxiety took its toll on me. I was tired all the time, my hair had thinned, and my overall physical and mental health was poor.

When Diego was a few months old, my dad, who’s always been my biggest support, finally gave me a reality check. He reminded me that in our culture, a mother is deeply respected. “If you’re not happy and healthy, your family won’t be either,” he said. He made me see that focusing on myself wasn’t selfish. Just the opposite—running on an empty tank wouldn’t benefit anyone.

I started scheduling time for myself and doing things I hadn’t done since Diego came into the world: yoga, eating clean foods, spending time with friends. I became so passionate about self-care that I even created my own nutrition brand for new moms, Majka. All moms need to care not only for our beautiful babies but also ourselves.

“My family kept me from spiraling.”

I experienced postpartum anxiety with all four of my kids, starting with my oldest, Sophia, 12. Each time, my mother, who is Dominican, would tell me to snap out of it because I needed to focus on my baby. She doesn’t believe in mental health. Women in my culture aren’t raised to be damsels in distress. When tough moments come along, we’re expected to slap on some red lipstick and keep moving forward.

That’s why I decided to speak to a therapist before my son, Dash, arrived nine months ago. By the time I became pregnant with him, I was armed with knowledge about PPA. I knew I had to talk to someone in a “no judgment” zone in order to be a better mother for all my children. I was very open with my three oldest about what I had gone through with them. I wanted them to know that if my anxiety came back, it wasn’t their fault. A new baby is an adjustment, and I didn’t want to confuse them when they saw their mom in a fog. I encouraged them to speak up if they felt that my soul and energy weren’t right.

I’m glad we had that conversation. One week, I overreacted about Dash’s pacifier and laundry not being sterile enough, and I worried that the car was either too cold or too warm for him. I started repeatedly asking my kids to check that Dash was breathing. By that time, Penelope, 10, said, “Mommy, I think you have postpartum anxiety.” If I hadn’t made PPA okay to talk about, I would have spiraled. Thanks to family, I was able to take a step back and reflect on what was going on. My husband and children helped me battle this not as a single person but as an army.

Quiz: Could You Be Exhibiting Symptoms of Postpartum Depression

My mom still doesn’t understand postpartum anxiety, but I speak to others about it. I wish someone had told me that you don’t just go back to your old self after having a baby. People admit to having “baby brain” when women do silly things like putting toothpaste in the fridge, but hardly anyone admits to having PPA. And guess what? Many women do. Recently, my best friend called me in tears after her son was born to tell me that she, too, had PPA. I packed up my kids and went over to help her right away.

“My faith helps me ride out my anxiety.”

In my career as a corporate trainer in charge of assisting new employees, I was constantly pushing myself out of my comfort zone. I never had anxiety. Then in February 2018, my son, Adriel, was born. A few days after bringing him home, I was changing his diaper when pee splashed on his face. I began to scream, panicked that he would swallow it and get sick. I worried that I was a careless mother and barely slept that night, wanting to call the pediatrician.

From then on, “what if” was always on my mind. I was afraid my baby would die of SIDS. I wouldn’t go shopping alone with him, because what if someone kidnapped him? Even at home, I worried that I would trip while carrying him.

How to Deal With New Mom Stress

I’m Mexican-American, and when I was growing up, people in my family didn’t talk about how they were feeling. That’s why I confided only in my husband. He’s always been a great listener, but when he saw me reach rock bottom, he understood how hard motherhood was.

After months of struggling, I’m doing better, but I have my bad days. Thankfully, prayer helps me ride out each wave of anxiety. I turn to my faith, and that makes me feel peaceful, encouraged, and uplifted.

This article originally appeared in Parents Latina Magazine as 'Pushing Through Anxiety.' 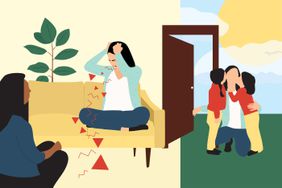 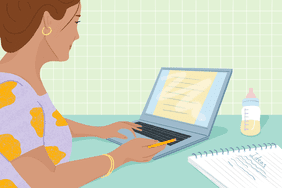