"You need to calm down," my husband told me. I didn't realize it at the time, but my unrelenting anger after pregnancy was a scary symptom of postpartum depression.

Right after I delivered my daughter by emergency cesarean section, I remembered I needed to call the phone company over a mistake in the bill. Hopped up on pain medication and sobbing tears of frustration, I yelled at the customer service person, "You can't do this to me. You are overcharging. It's not fair!"

My husband heard my screaming from the hall, came into the room, and gently took the phone away. "I'm sorry, my wife just had a baby, and she's exhausted," he said. "We'll get back to you at another time."

"Estelle, you need to calm down," he told me. It would not be the last time those words left his mouth.

My Signs of Postpartum Anger

Everything was a trigger for my postpartum anger. I yelled at a nurse who woke me in the early morning to take my blood pressure. When the social worker at the hospital did a routine check on new moms, she asked me if I felt depressed or unable to care for my daughter. I felt attacked and shouted back, "What are you talking about? I can take care of my daughter. How dare you ask me that!" She quickly left, closing the door behind her.

I was also mad at the clumsy lactation nurse who tried to force me to breastfeed, despite saying that my nipples were all torn up from giving my daughter colostrum.

Though I was grateful that the hospital allowed my husband to stay with me during recovery, he probably regretted the decision each time I lost my temper. I became livid at any interruptions—and my husband's constant tap, tap, tapping on his computer drove me insane.

The unrelenting rage I felt at the slightest provocation, which felt as though my eyeballs would explode, felt oddly empowering. But the night terrors overwhelmed me, making me feel like I was drowning in a sea of emotion. I'd had them before I gave birth—mostly about medical mishaps during delivery—but now they were back with a vengeance. My new dreams were of people in parks pulling my baby's stroller away from me. I'd wake up my fists balled ready to fight, the adrenaline coursing through my body.

What Caused My Postpartum Rage?

Many chalk it up to a woman's raging hormones and life stresses. I'm not the chillest person around, but I'm usually reasonable. The anger was an indication of my fear of being isolated in my new life as a mom, and my fear of being a failure at mothering. This began with my inability to breastfeed, and it's also because I came to motherhood in my mid-forties.

Treating My Anger After Pregnancy

I knew I needed help, so I met with a therapist after returning from the hospital. Without judgment, she made me realize that my situation was normal, and I wasn't insane. She reminded me that the postpartum rage didn't make me a bad mother— just a stressed-out new one.

My therapist encouraged me and my husband to deal with the situations that made me angry; if his tapping on the computer bothered me, for example, he took it to another room. We also noticed that my rage would increase if I was tired or sleep deprived, so we made sure that visitors only stayed a short period of time.

I soon felt acknowledged and supported. As I healed over the next few months and adjusted to my new life, I let go of the postpartum rage that had been consuming me.

The morning I woke up from a night-terror-free-sleep, glanced over at my sweet baby sleeping soundly in her crib, and heard my husband tapping on his computer—without feeling like I wanted to chuck him and it out of the window—I finally knew I'd be alright. And I was. 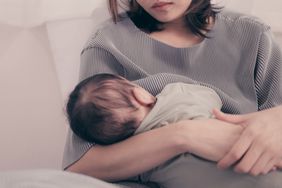 Parents With PTSD Are More Likely to Struggle With Breastfeeding