Your baby looks beautiful to you, but how do you -- and the rest of the world -- look to him? A peek at how eyesight develops.

Imagine peering at everything around you through a layer of Vaseline. That's how the world looks to your newborn -- just a jumble of vague shapes and shades.

But it won't be a blur for long. Soon he'll be able to spot a single Cheerio in a bowl (and guide it expertly into his mouth), and become transfixed by a colorfully dressed passerby on the street. How a baby's eyesight develops is a fascinating story -- here's a closer look.

The Shape of Things to Come

Your baby's vision is fuzzy in her earliest weeks, says Susan Day, M.D., a pediatric ophthalmologist at California Pacific Medical Center, in San Francisco. There's evidence that if something is within arm's length (8 to 15 inches) of a newborn's face, she can make it out pretty well, and that she's particularly interested in human faces. That's good news: It means that when you're holding or nursing your child, she's got a fairly clear view of you.

There are simple ways to keep your infant visually stimulated. Take her with you when you go to the grocery store (she'll be fascinated by all the packages, even if they're blurry), or let her big brother or sister make silly faces at her.

Speaking of funny faces, a newborn's eyes often wander or cross -- or even roll back in her head as she's falling asleep, leaving only the whites visible.

It may be alarming to watch, but it's perfectly normal and should subside around the end of the second month, as her muscle control improves and she learns how to focus.

Around that same time, at about 6 weeks, she'll also start perfecting her "tracking" skills -- the ability to follow an object with her eyes if it moves slowly in front of her. Try this: While your child faces you, tilt your head first to one side, then to the other. She'll follow your face as you move your head. Her eye movements may be a little jerky, but by the time she's 3 months old, she'll track fairly smoothly.

A Study in Contrasts

Ever wonder why many toys for young babies come in black and white? It's because infants have an easier time distinguishing highly contrasting colors (dark shades next to light ones) than pastels.

This inclination is also why your baby, in his early weeks, often seems more interested in looking at the top of your head than in your eyes. "He's visually attracted to areas of high contrast, such as where the hairline meets the forehead," Dr. Day explains.

By 2 months, your child will start gazing more directly at you and become interested in primary colors. Point out brightly colored objects -- your yellow T-shirt, a green ball. Since your little one can now distinguish more detailed shapes and designs, it's a good time to hang that polka-dot butterfly mobile you received at your baby shower.

Between 3 and 6 months, your baby will begin to see objects in three dimensions and acquire depth perception. Since her hand-eye coordination is developing at the same time, she may reach for things in front of her -- first by chance, then deliberately. (Watch out for those earrings!)

Your child may now notice things or people moving from clear across the room. She can also make out small objects closer to her, like blocks, and may be able to track and grasp them.

Goals Are in Sight

Six months of age is a benchmark. By now, some experts say, your child can discern subtle differences in pastels and judge distances with some accuracy. He'll attempt to pull himself up (now's the time to take down that mobile) and crawl, both of which require good vision. If there's a small, intriguing toy a few feet away, he'll try to reach it any way he can.

This is also when your little one will start turning on the waterworks. From birth, babies produce a small amount of tears for the purpose of keeping their eyes moisturized. Between 7 to 8 months and a year, though, your child will also make tears when he gets angry or upset enough to cry.

As your child's first birthday nears, he'll become increasingly attentive to objects placed in front of him. At every well-child visit, your doctor should examine your child's eyes. If she suspects a problem, she'll refer you to an ophthalmologist. By focusing on the health of your child's eyes, you'll ensure a bright future for him. That's something you can both look forward to.

Have you ever seen a baby wearing a pair of specs and wondered why? According to Jay Bernstein, M.D., a pediatric ophthalmologist in Cedar Knolls, New Jersey, specialists prescribe glasses for infants to correct a lazy or wandering eye, or to help ensure normal vision development if they think it might be headed off course. To assess a baby's vision, an ophthalmologist uses eye drops and a retinoscope, an instrument that examines the refraction of light in each eye.

Most babies who require glasses before the age of 2 outgrow them. In fact, many types of vision problems in infants can be corrected if diagnosed early enough. If one eye is intermittently or permanently crossed, or if you notice anything else that seems amiss (such as chronic discharge on the lashes or excessive tearing), call your pediatrician promptly. 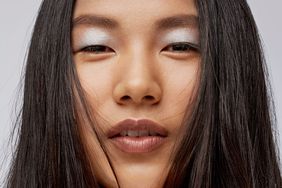 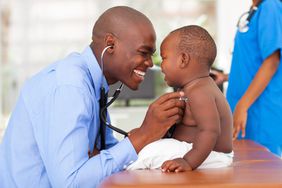 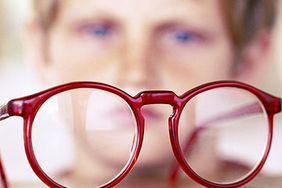