Are you noticing extra watery poop in the diaper? Learn what causes the runs and how to stop diarrhea in babies fast.

It's normal for baby stools to be soft and loose, especially during an infant's first few months. But when your baby has diarrhea, chances are that you'll know it. "The poop will have a watery consistency and bowel movements will occur more frequently," says Shaista Safder, M.D., a pediatric gastroenterologist at Arnold Palmer Hospital for Children in Orlando. Babies with diarrhea may also have a fever or seem disinterested in eating. Learn the potential causes for runny stool and how to stop baby diarrhea fast.

Bottle-fed babies tend to have tan-brown poop, while breastfeeding infants have loose, yellow, and seedy stool. So how can you tell the difference between baby diarrhea vs. normal poop? Start by examining the frequency of their bowel movements—not just the texture.

When a baby is very young (less than a month) it's typical to see a bowel movement every time they eat or even more often. After a month, the dirty diapers should slow down to about three or four per day; after two months, they can be as infrequent as once per day to one per week. But if your baby has diarrhea, they'll poop two or three times more than normal.

In addition, baby diarrhea looks watery, and it usually comes in high volumes. The color can range from yellow to green to dark brown. Babies with diarrhea may also act agitated and fussy, and they might have trouble feeding. These side effects can occur with bottle-fed baby diarrhea and breastfed baby diarrhea.

Causes of Diarrhea in Babies

Diarrhea in babies has many potential causes. Here are some of the most common ones.

Rotavirus is the most common cause of diarrhea in children ages 2 and younger. Fortunately, the number of children who get this intestinal infection has dropped significantly since the introduction of the oral rotavirus vaccine in 2006. "Vaccinated children can still get rotavirus, but they tend to have milder symptoms and recover faster," says Dr. Safder.

About one in 10 children who take antibiotics develop diarrhea, nausea, and stomach pain. "In addition to targeting bad bacteria, antibiotics kill off healthy bacteria in the gut, which can lead to stomach upset or diarrhea," says Iona Munjal, M.D., director of the Pediatric Antimicrobial Stewardship Program at The Children's Hospital at Montefiore Medical Center in Bronx, New York. If you think antibiotics are causing your baby's diarrhea, talk to your doctor before stopping the medication. Stopping antibiotics early can lead to antibiotic resistance and cause a bacterial infection to return.

Infants in daycare centers have a higher risk of contracting giardia, an intestinal infection caused by parasites. Exposure occurs when babies put fecal-contaminated toys, food, their hands, or other objects into their mouths. Most children get better without special treatment.

Because diarrhea is the body's way of getting rid of germs, it's best to let the illness run its course without medicine. "You should never give anti-diarrheal medication to a baby," says Dr. Safder, because the U.S. Food and Drug Administration (FDA) has not approved these meds for babies. Instead, you can ease your little one's discomfort with these tricks.

"Infants with diarrhea are especially susceptible to dehydration because, pound for pound, their small bodies lose liquids faster than [those of] older children or adults," says Rebecca Cherry, M.D., a pediatric gastroenterologist at Rady Children's Hospital in San Diego. Because your baby is losing fluids from diarrhea and probably isn't eating as much, you should offer them the breast or bottle more often, as well as a pediatric oral rehydration drink, if your doctor says it's okay. "Don't switch formulas without your doctor's consent and don't give fruit juice. Sugary drinks like juice can worsen diarrhea symptoms," says Dr. Cherry. That's because some kids aren't able to digest the sugars easily.

Babies who are eating solids can continue with their normal foods. "There's no evidence that the BRAT diet [bananas, rice, applesauce, and toast], commonly given for those with intestinal issues, is truly helpful. Plus, it lacks protein," notes Dr. Cherry. Instead, doctors now recommend lean meats, such as chicken, in addition to starchier foods like oatmeal, whole-wheat bread, and crackers, as well as bite-size pretzels and crackers to help replenish lost sodium. "Probiotics found in yogurt or available in oral drops can help restore healthy bacteria in the digestive tract," adds Dr. Safder.

The acid in diarrhea continuously soiled diapers, and frequent wipings can lead to skin irritation and diaper rash. Dr. Cherry recommends changing your baby's diapers often; using a soft washcloth and warm water, instead of wipes; and patting dry or air-drying your baby's buttocks. Apply a thick coating of diaper ointment or other moisture barriers, like petroleum jelly or zinc oxide, at each diaper changing. Let your doctor know if the rash doesn't improve or if it worsens after a few days. This often indicates a yeast infection, which requires treatment with a prescription or an over-the-counter antifungal cream.

Does your baby have yellow watery diarrhea, green diarrhea, brown diarrhea, or anything in between? Depending on the cause, these bowel movements may last between five and 14 days, but you should call your pediatrician right away if your infant has any of the following symptoms: 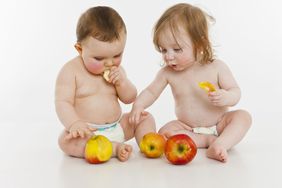 4 Foods That Cause Diaper Rash—And Others That Might Help