When your baby has a cold, you'll do anything to help them feel better. These home remedies for cough and congestion can get them on the road to recovery.

Of all the milestones your baby will encounter in their first year, one of the most heartbreaking is their first cold. Your little one might pant during feedings, snort themselves awake during a nap, or look at you, bewildered, as if to say, "What's happening to me?"

Most over-the-counter cough and cold medicines (aside from acetaminophen and ibuprofen) are not recommended for children under the age of 6, according to the American Academy of Pediatrics—but you can still make your baby more comfortable when they're feeling under the weather. Test out these five natural baby cold home remedies, and know when it's time to visit the pediatrician.

Home Remedies for a Cold in Babies

Wondering what to do when baby has a cold? Try some of these expert-approved natural cold remedies for infants.

For the first six months, babies tend to breathe through their nose, so congestion can hit them hard, says Mike Patrick, M.D., assistant professor of pediatrics at Nationwide Children's Hospital in Columbus, Ohio. Clearing mucus with a bulb syringe can help them breathe easier. The standard blue-bulb syringe can be too big for the tiniest nostrils, so if this is the case, try a smaller version that's marketed as an ear syringe.

To use the syringe, squeeze the bulb to release excess air, and gently insert it into your baby's nostril. Tilt the tip down slightly so it's more perpendicular to their face, release the pressure, and take it out of their nose. Squeeze the mucus onto a tissue. "You'll be surprised how much you can get out," says Dr. Patrick.

For more power, use a saline nasal solution to loosen the congestion first. Following the manufacturer's directions, simply lay your baby on their back and spray a few drops into each nostril.

Just like adults, babies sometimes don't feel like eating when they're sick, but you should still encourage your infant to nurse or take a bottle as often as possible, says Charla Tabet, an infant-development specialist at La Rabida Children's Hospital in Chicago. If they won't drink milk, consult with your doctor to make sure they don't become dehydrated—and ask if you can offer them an electrolyte solution. Feeding your baby in an upright position can also help ease congestion and prevent mucus from running down their throat while drinking.

"Babies don't have the muscle strength to cough effectively, so it can be tough for them to clear phlegm," says Stan Spinner, M.D., chief medical officer of Texas Children's Pediatrics in Houston. One natural remedy that can help: Take your baby into the bathroom and turn on the shower to make the air hot and steamy. "It will get his nose running, loosen the mucus in his throat, and make his coughs more productive," says Dr. Spinner. Try doing it before bed, since mucus tends to drain into your baby's throat and chest while they lie down.

Your baby needs more sleep when they're sick, but all those annoying symptoms can make a decent snooze difficult. A comforting bedtime routine—such as playing music or taking a bath together—can go a long way toward encouraging your little one to nod off.

Putting a cool mist humidifier in your baby's room during naps and nighttime can serve as a cold remedy. That's because humidifiers moisten the dry winter air, which relieves coughing and congestion, says Rhya Strifling, M.D., a mom and pediatrician at the University of Kentucky College of Medicine. Keep the humidifier out of your baby's reach, and fill it with fresh water every day so it doesn't get moldy. Also, be sure not to have the heat turned up too high, which can worsen your baby's congestion.

Should You Have a Humidifier in Your Baby's Room?

For infants up to 3 months, any fever over 100.4 degrees Fahrenheit is a "call your doctor right away" scenario, says William Varley, M.D., community pediatrician with Children's Hospital of Pittsburgh. For older babies, look out for a fever that lasts more than three days or that develops a few days after the onset of cold symptoms. Other signs to watch for include wheezing or rapid, strained breathing, which may indicate a virus or pneumonia. If your baby develops coughing fits, it may be whooping cough.

"Usually antibiotics are not needed, unless the congestion develops into an ear infection or pneumonia," says Dr. Strifling. "If your baby has fever for more than three days, or you feel like his symptoms are getting worse rather than better, than it might be time to visit your pediatrician." 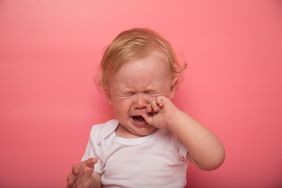