What causes genetic defects and how can they be treated?

Most babies are born perfectly healthy. But for some newborns, certain substances essential to proper body functioning are either abnormal or completely absent. Without intervention, some of these deficiencies can be devastating -- affecting a variety of bodily systems.

A child born with a biochemical birth defect requires a great deal of parental work to ensure her long-term health. Be assertive and ask your baby's pediatrician lots of questions so you can learn everything there is to know about your little one's condition. In addition to appointments with specialists, you should also keep up with regularly scheduled well-baby visits, because many complications can be treated through early detection and intervention.

If the abnormality is the result of an inherited disorder, you may also want to see a genetic counselor, who can assess the probability of a recurrence in your subsequent pregnancies and, further in the future, any potential problems with your children's pregnancies.

The following pages include essential information about biochemical birth defects and the impact they may have on you and your baby.

Sickle cell disease occurs in around one in 625 births and affects primarily African-Americans and Hispanics of Caribbean ancestry. Because of its prevalence, 30 states require that newborns be given the blood test that detects the disorder.

The disease can cause debilitating bouts of pain and damage to vital organs and can sometimes be fatal. Sickle cell disease affects the hemoglobin (a protein inside the red blood cells) in such a way that the cells become distorted -- instead of their normal, round shape, they look more like bananas or sickles. These misformed cells then become trapped in and destroyed by the liver and spleen, resulting in anemia.

Symptoms: In severe cases, a child affected with sickle cell disease may be pale, have shortness of breath, and tire easily. Episodes of pain, called crises, happen when the cells become stuck, blocking tiny blood vessels and cutting off the oxygen supply to various parts of the child's body. Another complication of sickle cell disease, noticeable mostly in infants and young children, is vulnerability to severe bacterial infections.

Treatment: Two weapons against bacterial infections are immunization (the usual vaccines, as well as pneumonia and flu shots) and daily preventive penicillin treatments. Although sickle cell disease can't be cured, a number of new therapies that reduce the severity and frequency of crises are being studied.

PKU, or phenylketonuria, is an inherited metabolic disorder that occurs in one in 15,000 births (less commonly among African-Americans and people of Jewish descent). All babies in the U.S. are tested for the disease soon after birth. A child with PKU is missing a crucial enzyme that breaks down a protein called phenylalanine, which is found in many different foods. If PKU is left untreated, this protein can rise to high concentrations in the body, become toxic to the brain, and cause mental retardation.

Symptoms: PKU has no symptoms -- it's typically diagnosed through newborn testing. However, it is only detectable in a baby more than 72 hours old who has already ingested milk. Ideally, the testing should be done during the baby's fourth or fifth day of life.

Treatment: A child born with PKU can live a normal life if she's put on a strict diet. Usually started before the fourth week of life, this diet is low in foods that contain phenylalanine. Instead of breast milk or cow's milk, an affected child must be fed a special formula. As the baby gets older, she can eat certain vegetables, fruits, and grain products, but usually must avoid cheese, meat, fish, eggs, and foods made with some artificial sweeteners, such as aspartame. Regular blood tests of phenylalanine levels can help determine what an affected child can and can't eat.

One of the most common chromosomal abnormalities, Down syndrome, is a frequent cause of mental retardation and can be diagnosed prenatally. Though Down syndrome occurs in one in 800 births overall, the incidence is much higher with older mothers (one in 106 for mothers over age 40). Though children with Down syndrome have some degree of mental retardation, most can be expected to do many of the same things that any young child can do -- including walking, talking, and being toilet trained -- although generally they learn how to do so later than unaffected children.

Symptoms: A child with Down syndrome generally has characteristic physical features:

More than 50 percent of children with this defect have visual or hearing impairments. Ear infections are also common.

Treatment: While Down syndrome is not curable, early intervention allows a child to develop to his full potential. From the baby's birth on, parents and health-care providers need to pay special attention to his development to ensure that he's optimally stimulated. Specialists may also teach parents how to lengthen baby's attention span, for example, or help develop his muscle tone.

Without proper treatment, the recurring ear infections can lead to permanent hearing loss. Between 30 and 50 percent of affected babies also have heart defects, which may require treatment with drugs or surgery. Ten to 12 percent of babies with Down syndrome are born with intestinal malformations that require surgery.

Fragile X syndrome primarily affects males (one in 1,500). Although 1 in 1,000 females is a carrier, only one-third of female carriers show outward signs of having the defect. Fragile X syndrome, similar to Down syndrome, is a frequent cause of mental retardation, ranging from mild to severe, and may be diagnosed prenatally.

Symptoms: The physical characteristics of Fragile X syndrome may include:

However, many children with Fragile X syndrome appear physically normal at birth, so a diagnosis may not be made until between the ages of 18 months and 2 years. At that time, a lack of language development coupled with other developmental delays usually prompts testing.

Treatment: As with Down syndrome, Fragile X is not curable. However, early intervention is essential. As with most of these birth defects, early-intervention programs begun in infancy can help maximize the child's development. Children with Fragile X syndrome can be expected to do most things that any young child can do, although they also generally learn these things later than unaffected children.

Fortunately, new treatments are being studied every day. Ask questions, learn all you can, and focus on your child's particular impairments so you can do everything possible to help him develop to his full potential. 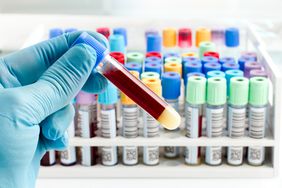