Why some moms are passing on purees and going straight to finger foods.

When Jenny McGruther's son started to show an interest in eating solids at 6 months, the mom from Crested Butte, Colorado, got busy making healthy purees -- but her hard work didn't pay off. "He didn't like me putting a spoon in his mouth and would spit the food out. It was frustrating," she says. Then she read about another way to introduce solids, called baby-led weaning, that skips the spoon: You just offer your baby soft cut-up fruits and vegetables, whole grains, and stewed meat and let him feed himself. This turned out to be McGruther's ticket to a happier mealtime: "It was great to see my son explore. He'd reach over and grab something, like a soft pear, and gnaw on it." If you're curious about this feeding method, read on for more information and tips to get started.

In With The Old

Baby-led weaning may seem radical, but it's actually a centuries-old practice in many cultures. "Parents would wait to start solids until their baby began picking food off their plate," says Jennifer Salib Huber, R.D., N.D., a dietitian and naturopathic doctor at Pillars of Health, in Dartmouth, Nova Scotia. The method was repopularized by British public-health nurse Gill Rapley about ten years ago, and has caught on around the world, in homes, playgroups, and research labs.

Of course, you're not actually "weaning" your baby, who'll continue to get most of her calories from breast milk or formula until at least 9 months. The idea that you should feed your child "baby food" began in the United States around World War II, when most doctors recommended introducing strained solids between 4 and 6 weeks. At that young age, infants can barely even hold their head up. Now that pediatricians advise starting solid foods at 4 to 6 months, when a baby's digestive system is able to handle them, parents don't have to spoon-feed their babies. Most healthy 6-month-olds have the head and trunk control to sit up, and the dexterity to grasp objects and put them in their mouth, says Allison Brindle, M.D., a pediatrician at Cleveland Clinic Children's Hospital, in Ohio. "If your baby has reached those developmental milestones, baby-led weaning is a completely viable option," she says.

Many parents who first hear about this approach wonder the obvious: Will my baby choke? A 6-month-old is no more likely to gag on soft finger foods than on purees -- and she doesn't need teeth to manage them. "Babies have an instinct to suck, chew, swallow, and spit, so they should naturally know what to do," says Jatinder Bhatia, M.D., chair of the American Academy of Pediatrics? committee on nutrition.

Giving kids the chance to handle their food allows them to explore different textures, shapes, weights, and sizes. "Learning how to pick those foods up and aim them into his mouth gives a baby a lot of practice developing his hand-eye coordination and motor skills," says Tracey Murkett, coauthor (with Rapley) of Baby-Led Weaning. Some say baby-led weaning helps children develop their eating skills more quickly because they're given the opportunity to practice manipulating food with their hands, tongue, and gums. It may also lead them to enjoy healthier fare: Research from the University of Nottingham, in England, found that babies who were introduced to solids this way were more likely to develop a preference for all food categories except sweets, whereas spoon-fed infants preferred sweets over anything else. The study also found that these independent eaters were less likely to become overweight than spoon-fed babies were.

Let your baby take the lead and go at her own pace -- giving her time to squeeze, mouth, and chew the food. It's also important to create a safe environment for her to do so. Offer solids when she is content and alert, says Dr. Brindle. She should always be sitting up and strapped into a high chair, and you should never leave her alone while she's eating. Start with foods that are soft and chewable, thick enough for her to pick up and long enough to grip on one end and gnaw on the other. Try melon slices, toast sticks, steamed veggie stalks, or strips of stewed meat. Place a couple pieces of different foods in front of your baby and let her choose what she wants to eat. Avoid round foods that are the size of a nickel or smaller, such as whole grapes and nuts, since these are obvious choking hazards. Eat along with your baby too; sharing meals is a social activity, and this lets her use you as a role model.

It's fine to also offer your baby pouches of purees or spoonfuls of foods like yogurt -- which may be more convenient when you're away from home -- but watch for her fullness cues. "You don't have to choose one form of feeding over another," says Dr. Salib Huber. "Eating nutritious food should be a positive experience."

Originally published in the September 2013 issue of Parents magazine. 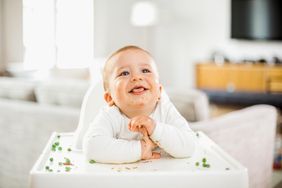 How One Mom Embraced Both Baby-Led Weaning and Purees 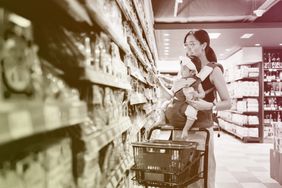 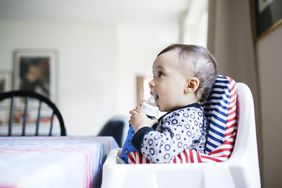 Baby-Led Weaning is Becoming the New 'Breast is Best' 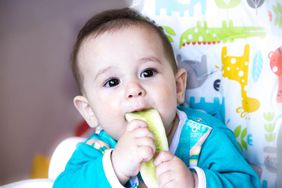 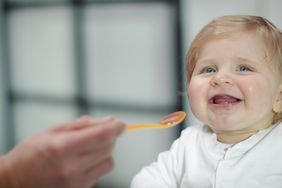 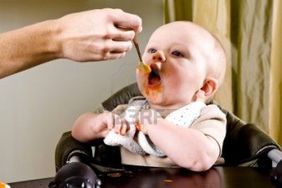 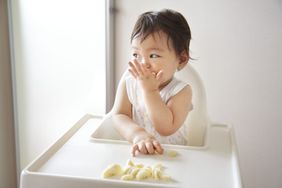