Hungry babies can be hard to please. We offer simple solutions to your common concerns.

I nurse my newborn on demand, but she always seems to be hungry. Can I get her on a schedule?

Unfortunately, a set schedule doesn't necessarily work for a newborn, says Laura Jana, MD, coauthor of Food Fights (American Academy of Pediatrics). "You don't want to say, 'I'm not feeding my baby because the baby book says every two to three hours,'" she explains. "You want to make sure you're feeding a new baby enough. Also, some newborns take a long time to eat, which can make you feel as though you're feeding your child constantly."

Keep in mind that you don't have to jump the minute your child fusses and assume he needs to be fed, says Dr. Jana. Your child could be crying for any number of reasons, such as feeling tired or overstimulated. Also, infants often want to nurse for comfort -- they need to suck but aren't hungry. Once your breastfeeding is established -- usually by 2 to 4 weeks of age -- it's good to offer a pacifier if you feel as though your baby has just eaten. As far as getting him on a schedule, once you go to your next well-baby visit and confirm that he's gaining weight properly, you can try holding him off for a reasonable two to three hours. But remember that babies go through growth spurts, such as between 3 and 6 weeks and at 4 months, when they'll want to nurse more often.

My baby always seems fussy after a feeding. Should I try changing her formula?

"Sometimes switching formulations -- say, from powder to concentrate, but not the brand -- can help, because your baby might be gassy from the bubbles that form when you mix the formula," says Dr. Jana. Typically, your doctor will recommend a new formula only if your child shows signs that she may be allergic or intolerant to the proteins in milk. Besides fussiness after feedings, signs of either of these conditions include blood in your baby's stool and vomiting or diarrhea. Babies with a milk protein allergy can also experience hives and respiratory problems.

If you're concerned, consult your child's doctor, who may recommend a hypoallergenic formula, which has cow's-milk proteins that are broken down enough to avoid causing a reaction in most babies. She may also test baby's poop for blood you can't see.

I've heard that soy can cause reproductive problems. Is soy formula safe?

Soybeans and other legumes contain a small amount of natural estrogen, which, since it's a hormone, could in theory affect a child's reproductive organs and maturation. Studies done on lab rats and monkeys that were fed soy or components of soy have found some adverse affects. But a National Institutes of Health report, released last year, concluded there's no evidence that feeding soy formula to babies leads to reproductive problems.

That said, soy formula shouldn't be your first choice when choosing what to feed baby, advises Jatinder Bhatia, MD, a member of the American Academy of Pediatrics' (AAP) committee on nutrition. The AAP says that when breastfeeding isn't possible, then parents should give infants formula made from cow's milk, and they should only offer soy formula when special situations exist -- such as when medically necessary. For instance, soy formula is fed to babies with galactosemia (a rare metabolic disorder) who can't consume milk with the sugars lactose or galactose. And it can be given to a child with a confirmed milk allergy who isn't also allergic to soy, which is often the case. The AAP also says a strict vegetarian who doesn't breastfeed can use soy formula -- as long as the infant isn't preterm.

My 6-month-old has been breastfed exclusively and won't take a bottle. I want to wean her onto formula. What can I do?

Babies are creatures of habit, so if she's used to having the breast, it's normal for her to balk at bottles. But there's hope. Betsy List, a lactation consultant and coordinator at the Center for Breastfeeding Medicine at Cincinnati Children's Hospital Medical Center, offers this plan: Before you move to formula, try putting some of your own expressed milk in the bottle. When your baby is a little hungry but not overly anxious to eat, have someone else offer the bottle ahead of her normal feeding time. Touch the corner of her mouth with the bottle's nipple and let her root for it. If she won't take the bottle, try again later or the next day.

"Use times when she is naturally curious or exploring her environment to practice with a bottle," List adds. "After your baby learns to take a bottle with your own milk, you can then gradually begin mixing in formula so she can adjust to the new taste."

My 7-month-old eats no more than a couple of tablespoonfuls of food per day. How much should she be eating?

At this age, "some kids are precocious," says Dr. Jana. "They eat three meals of solids and are even into table food, while others are just getting the hang of it." So don't worry about the numbers, and concentrate more on gradual improvement as the days and weeks go by, says Paul Contini, MD, a pediatrician in San Jose and a member of the American Academy of Pediatrics' committee on nutrition. If you think your kid is eating small amounts of food because she's not wild about spoonfeeding or is still adjusting to the whole eating thing, try increasing the number of times you offer baby food to two to three times a day so she can practice, says Dr. Contini.

If your baby drinks more than 30 ounces of formula a day or still nurses every two to three hours, then cut back on the milk a bit so she'll have an appetite for food, he adds. To ensure that your child will be hungry, it's also a good idea to wait at least an hour after bottlefeeding or nursing before offering baby food.

My 8-month-old hates meat. What can I do?

While meat is important for babies because it's a source of iron, your child can also get iron from other foods, such as fortified infant cereal and green vegetables, says Liz McMillan, RD, a clinical nutritionist at the University of California-San Francisco Children's Hospital. Nonetheless, continue to offer meat to your child, she says. Dr. Jana suggests mixing it with other foods you know he likes. In fact, she says, you can go straight to mixed dinner baby foods, such as carrots and beef or apples and chicken. If you know your baby has already had the vegetable or fruit with no adverse reaction, then it's fine. Also, a baby who doesn't like pureed meat may like meat once it's offered in a different form, such as shredded chicken in soup, she adds. Just let the soup cool first.

My toddler prefers to snack all day rather than sit for bigger meals. Is this okay?

Yes. "Toddlers have small stomachs and even smaller attention spans," says Dr. Contini. But at the same time, try to establish a schedule of meal and snack times -- usually three meals and two snacks a day. "Ultimately, even if it doesn't seem like it, your child wants structure and wants you to tell her what's correct," says McMillan. That's why your toddler should be sitting down for meals and not walking around, says Dr. Contini, who also reminds parents -- when serving snacks -- to give children healthy choices they would serve at a "real" meal, such as fruits and vegetables, and not junk food.

My 15-month-old will eat only three foods -- applesauce, macaroni and cheese, and Cheerios. How can I expand his diet?

If he refuses to eat what you're serving, forget cajoling or forcing him, says McMillan. Accept his refusal, but don't automatically pull the Cheerios box out of the cabinet. Wait another hour or two until your child is hungry again, and offer the same meal. At that time he'll be more likely to eat it, McMillan says. If he still balks, give him a choice between the dinner foods and a simple, healthy alternative, like a cheese and tomato sandwich. "This sends the message that Mom is still in charge of the food choices but is willing to work with the child to a certain extent," says McMillan. And eventually, if you continue this routine, your child will eat other foods. It just might take awhile.

Letting your child participate in preparing meals can also lure him in, says McMillan. So ask him to add the salt and pepper to the soup or to pick out which tomato you'll use for the salad. There's also nothing like a little creativity to make foods more attractive, McMillan says: "Help your child arrange the vegetables into a smiley face or another simple picture on the plate."

Vitamins for Kids: Vital or Not?

Giving your child a multivitamin seems like a safe bet, particularly if you have a picky eater -- sort of like an insurance policy. But in truth most babies and toddlers don't need them. "Vitamins will not protect your child from common childhood illnesses or make him grow faster or taller," says Dr. Contini. He adds that so many foods are fortified with vitamins and minerals these days -- for instance, bread contains folate and iron, and orange juice has calcium -- that even if your child is not the best eater, once he's eating table food, chances are he is getting plenty of vitamins.

Still, there are a few circumstances in which your doctor may prescribe a multivitamin. A vitamin drop or extra iron may be recommended for preemies, low birth weight babies, and babies with certain metabolic disorders, says Dr. Contini. Some doctors also routinely prescribe multivitamin drops for breastfed babies because breast milk lacks sufficient vitamin D and, after 6 months, may not provide enough iron. However, if a baby is healthy and Mom is well nourished and taking a multivitamin herself, this is not needed. Moreover, at 6 months most babies start eating solids that provide iron. Kids typically hate the strong metallic taste of vitamin drops, so it's just as well. Of course, if giving your child a daily multivitamin makes you feel better, go right ahead; generally, they're not harmful.

Copyright © 2007. Used with permission from the October 2007 issue of American Baby magazine. 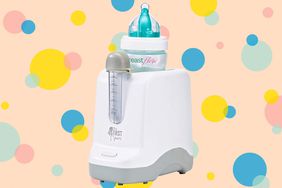 These Baby Bottle Warmers Make Feedings So Much Easier and Faster

How much solid food should my baby eat?

What should I do if my baby hates meat?