The White House's three-step plan to tackle the formula shortage will begin immediately, but officials don't yet know when parents will feel the impact.

Nicole Harris
Nicole Harris is the Editor at Parents. She joined the team in 2018 as a Staff Writer and was promoted to SEO Editor in 2021. She now covers everything from children's health to parenting trends. Nicole's writing has appeared in Martha Stewart Weddings, Good Housekeeping, The Knot, BobVila.com, and other publications. A graduate of Syracuse University, Nicole currently lives in New Jersey with her husband.
our editorial guidelines
Medically reviewed by
David L. Hill, M.D., FAAP

Medically reviewed by David L. Hill, M.D., FAAP
Dr. Hill has been practicing pediatrics in the outpatient and inpatient settings since 1998. He has written and edited three books for the American Academy of Pediatrics, including the best-selling Caring for Your Baby and Young Child: Birth to Age 5. He has served in a variety of leadership roles in the North Carolina Pediatric Society and American Academy of Pediatrics, most recently on the AAP Council Management Committee. Dr. Hill has a long career in broadcasting as well, currently co-hosting the AAP's flagship podcast, Pediatrics on Call.
learn more

Across the country, parents of formula-fed infants are facing a scary situation: empty shelves in the grocery store. Formula shortages have been reported for weeks now, affecting brands like Gerber, Enfamil, Similac, and many others. Limited supplies have also led to purchase limits, price hikes, and hoarding—all of which exacerbate the issue even more.

The formula shortage has gotten so bad, in fact, that the federal government is stepping in. On May 12, the White House announced plans to curb the shortage and provide relief to parents. President Biden met with manufacturers and retailers—including Target, Gerber, Wal-Mart, and Reckitt—to discuss urgent solutions.

"We take this issue incredibly seriously," says Christen Linke Young, Deputy Director of the Domestic Policy Council for Health and Veterans for the White House. "The President announced a package of three new actions that build on everything we've been doing since this recall began."

Here's what you need to know about the formula shortage, including more information about the government's three-step plan for relief.

There isn't one clear reason behind the formula problem; rather, it seems to be a combination of supply chain issues, labor shortages, inflation, and recent formula recalls. (In February 2022, Abbott Nutrition voluntarily recalled powdered formulas following reports of four infant illnesses and two deaths from bacterial contamination, leading to the closure of its factory in Sturgis, Michigan).

Parents have also been stockpiling baby formula, which makes the issue worse—but really, who can blame them? The majority of infants depend on formula for their main or supplemental source of nutrition, and there's no other safe alternative to breast milk. Also, some babies need specialty formulas for food intolerance and digestive issues, and if parents can't find these brands, their little one could suffer negative health consequences.

How the White House Plans to Help

The Biden Administartion is working around-the-clock to combat the formula shortage. "As a result, more infant formula has been produced in the last four weeks than in the four weeks preceding the recall"—even with the closure of Abbott's factory in Michigan, according to a May 12 press release from the White House. Here's more about Biden Administration's plans to combat the shortage.

The U.S. normally produces most of its infant formula, but given the closure of the Abbott's Michigan factory, supply is currently very low. In the near future, the Food and Drug Administration (FDA) will announce new plans for formula importation. "We have been seeing big increases in domestic production, but this additional supply from abroad will help to complement that and bring inventory to store shelves," says Linke Young.

Cracking Down on Price Gouging

Unfortunately, retailers have been jacking up prices because of increased demand. What's more, some people are purchasing formulas and reselling them for a large markup—especially with speciality brands. According to Linke Young, the Biden Administration will "use every tool at our disposal to go after the bad guys who are taking advantage of that situation to hoard product and sell it at inflammatory prices."

About half of the nation's supply of infant formula is purchased by participants using the Special Supplemental Nutrition Program for Women, Infants, and Children (WIC). Federal and state regulatory barriers limit the sizes and types of formula WIC recipients get—and in turn, this influences what manufacturers produce. The Biden Administration is hoping to change these regulatory barriers, allowing WIC recipients to acquire a wider variety of products. "Simplifying product offerings allows manufacturers to increase the speed and scale of their infant formula production, stabilizing the overall volume of formula available in the market," according to the White House press release.

When Will the Formula Shortage Get Better?

Linke Young says the White House is beginning its plan immediately—but she's not sure when families will get relief. Abbott Nutrition is planning to restart production at its Michigan plant within the next couple of weeks (pending FDA approval) which might help move things along. "When that formula does become available again, Americans should be confident that it's safe if the FDA says it is," says Linke Young.

The FDA is also allowing Abbott to release products to "individuals needing urgent, life-sustaining supplies of certain specialty and metabolic formulas on a case-by-case basis that have been on hold at its Sturgis facility," says the organization. Parents must speak with their health care provider to determine if the benefit of using the formula surpasses any risk of bacterial contamination.

If you're having trouble securing formula, here's what else you can do in the meantime: 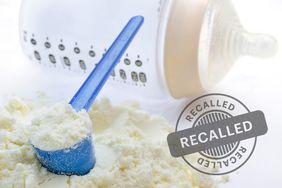