Instead of fighting for every mother's access to healthy, affordable formula, research focuses on the positives of breastfeeding. But what about parents who want to formula-feed and can't afford to?

Among the myriad of expenses that the arrival of a new baby portents, the cost of formula particularly stands out. It's usually a necessity, especially so if a new parent chooses not to breastfeed for whatever reason. And yet, formula can end up costing a family between one and two thousand dollars a year—a large sum for the average American parents. So, why, exactly, is baby formula so expensive? Is this the case all over the world? And why do certain brands cost more than others?

There are about 50 different types of powdered milk in the United States, all of them strictly regulated by the Food and Drug Administration (FDA). The only real substitute to breast milk (which, take it from someone who tried in vain to nurse both of her daughters, is pricelessly difficult to produce), formula is the number-one source of food for babies under the age of one. It should come as no surprise, then, that such a precious product is associated with steep prices.

According to the United States' Office of the Surgeon General, the price of formula within the country oscillates between $1,200 and $1,500 per family throughout a baby's first year of life. Specifically, high-end formula brands such as Enfamil and Similac can run about $1 per ounce, whereas less costly ones such as Kirkland will set folks back around $0.50 per ounce.

According to the World Health Organization, in most European countries, including Spain, France, the United Kingdom and Germany, the price per ounce is closer to $0.60. The outlier within the continent is Italy, where the cost has sometimes been triple the one from neighboring countries (the local Italian government has been dealing with the problem for years, issuing plenty of ordinances to try and cap the gauge. You can read more about it all right here).

In Canada, on the other hand, the cost of powdered milk has doubled every 10 to 15 years, despite increasing rates of breastfeeding—most likely given the fact that the country imports the majority of the baby formula it sells, therefore having to account for currency exchanges and import costs.

Overall, a slew of factors contribute to the price of formula, including local taxes as well as costs related to distribution, raw materials, and registration efforts. The latter is an aspect that is intricately connected to each country's regulatory systems, led by the Food and Drug Administration (FDA) in the United sSates and the European Commission on the other side of the Atlantic. Specifically, the ingredient list that each administrative body requires is what affects formula costs.

"In general, European formulas meet most FDA guidelines. But there are some differences," says board-certified pediatrician Kristin Saxena, MD. "The European Union bans certain added sugars and requires that 30 percent of carbohydrates come from lactose," which is the same carbohydrate found in breast milk. Although high-end American formulas are usually made with lactose, generic ones use more inexpensive carbohydrate sources (think sucrose and corn syrup) that are also thought of as not-as-healthy.

There are other differences to take into account, too: "U.S. formulas tend to contain more iron, while European ones tend to contain higher levels of DHA," explains Dr. Saxena. "DHA is not required in U.S. formulas, though most do contain it—it has been demonstrated to be important in brain development."

Questions loom: Why do American parents have to choose between health and affordability? If the formula industry within the United States is so strictly regulated, why not at least regulate it to get the very best out of each product? Why should lactose, the healthier option, be starkly more expensive than corn syrup? Unfortunately, it seems to all go back to the price of doing business—after all, a formula company's end goal is to make money.

"The price of formula in the U.S. is dictated by the market," says Dr. Saxena. "Obviously, it is important that all families and babies are able to access adequate quality formula. Private insurance does not generally cover other feeding expenses for children, so I don't think that is the most appropriate method for assisting families, except in the case of medical need necessitating a very specialized or prescription formula."

A formula company's end goal is to make money.

The 1975 expansion of the United States' Special Supplemental Nutrition Program for Women, Infants and Children (WIC) to include non-breastfeeding mothers, rather than increasing overall access, has actually driven up the market price of formula. Parents supported by the program receive state-approved products for free, and the rest have to pay a premium.

According to the U.S. Department of Agriculture (USDA), the agency will typically receive a rebate for each can of formula purchased through the program, "in exchange for the exclusive right to have its formula provided to WIC participants in the state." As a result, companies have increased their in-store prices to recoup losses incurred by offering rebates to WIC agencies. According to an official study by the USDA, "for a given set of wholesale prices, WIC and its infant formula rebate program resulted in modest increases in the supermarket price of infant formula, especially in states with a high percentage of WIC formula-fed infants."

But pricing doesn't seem to be an issue for American parents choosing to import European formulas over purchasing local options. The corn syrup and other sub-par ingredients boasted by most American formulas have led plenty of Americans to choose imported European options over local ones: "There are large Facebook groups devoted to European formulas, where parents share spreadsheets and detailed notes on ingredients and how these formulas compare to their U.S. counterparts," reports the New York Times.

"Some caregivers report choosing them because European brands offer certain formula options (like those made from goat's milk or milk from pasture-raised cows), which are rare or nonexistent in an FDA-regulated form in the U.S.," the Times continues. "Others seek out European brands because of the perception that the formulas are of higher quality and that European formula regulations are stricter." Dr. Saxena notes, however, that parents should be aware of the fact that the FDA does not review imported formulas.

"If importing a formula, a U.S. parent should ensure that it has been transported and stored in appropriate temperature conditions," says Dr. Saxena. "Additionally, they should ensure that they can understand the preparation instructions, as they may differ from those conventionally used in the U.S., which is 1 scoop per 2 ounces of water."

When queried about the price of the product, Dr. Jessica Shepherd, MD, says we should instead focus on its chemical makeup. "The cost of formula is not as important as what is in the actual product," she says. "More attention should be paid to what the ingredients are."

But the financial aspects involved in formula-feeding are not the only strains that parents have to deal with when opting for a bottle. In fact, parents like myself, who have chosen not to breastfeed, report feeling judged by family, friends, and the world at large.

Social media, especially across American accounts, is drenched with the catchphrase "breast is best," in no small part due to the fact that formula will inherently always be more expensive than breast milk, which is viewed as "free"—because society doesn't attach a value to the unpaid labor of the breastfeeder. And, yet, Dr. Shepherd notes that although "most infants start off breastfeeding (84.1 percent), only 58.3 percent [do so] at six months of age." If so many of us make use of the bottle eventually, why is it that we shame each other into doing so almost secretly?

The emotional toll of choosing formula over breast milk seems to be just as acute in Europe. "In Italy, they don't give you formula in the hospital," a friend who lived in Europe until this summer recently told me. "They assume you will breastfeed. I had to beg for formula." That being said, once she left the hospital, finding powdered milk across the country was never an issue.

Clearly, decisions involving how to feed our children aren't solely dictated by our own belief systems and freedom of choice. Some parents don't have the financial privilege to purchase higher-end (and healthier) formulas; others who may wish to use formula choose to breastfeed instead to avoid judgement from friends, family, and even the medical community. Ironically, instead of fighting for every mother's access to healthy, high-end formula at affordable prices, most studies about the topic have focused on the positives of breastfeeding over formula-feeding. Here's hoping we'll soon find a balance between the two conversations. 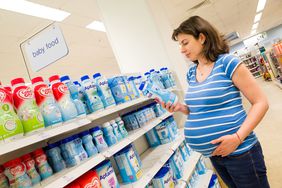 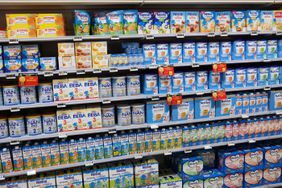