All babies develop at different rates and have different nutritional needs, but you can use these guidelines to learn more about what, how much, and when to feed your infant.

Wondering if you're feeding your baby enough breast milk, formula, or solid food is a common parental concern. Babies require different amounts of food depending on body weight, appetite, and age, which can add to the confusion. Fortunately, experts offer some recommendations.

Unless your baby's pediatrician advises you otherwise, one of the most important things you can do is listen to your infant's hunger and fullness cues to guide feedings, rather than giving them a specific amount or sticking to a strict schedule. Read on to learn about baby feeding guidelines by age, and if you're still unsure, ask a pediatrician for specific guidance on feeding your baby from the newborn stage to toddlerhood.

While each baby's feeding needs may be slightly different, based on their weight, age, and other factors, most will follow a predictable schedule. According to the American Academy of Pediatrics, babies should be fed when they seem hungry.

In the first months of life, this is very often. Newborns eat every two to three hours. By two months, babies will feed every three to four hours, and by 6 months old, the time between feedings stretches to every four to five hours. Below are the average amounts of breast milk or formula babies at each stage need at each feeding.

Newborns should receive all their calories and nutrition from breast milk or formula. Here's a tentative breakdown of newborn feeding patterns.

Most newborns eat every two to three hours, according to the American Academy of Pediatrics (AAP), and they drink 1 to 2 ounces of breast milk per feeding. When your baby reaches 2 weeks old, this amount increases to 2 to 3 ounces.

If you're pumping and bottle-feeding, you can quite literally see how much breast milk your baby is consuming each feeding, but if you're feeding directly from the breast, it's much more difficult to measure your infant's intake. And that's OK.

If your baby is nursing, you can watch their output as a way to gauge their intake. You can tell your little one is eating enough if they wet their diaper two to three times a day in the first few days and then five to six times a day after they are 4 or 5 days old.

A formula-fed newborn will take about 1 to 2 ounces per feeding in the first week, gradually increasing until they take 3 to 4 ounces at each feeding by the end of the first month. Formula-fed infants tend to eat every three to four hours and are more likely to be on a predictable feeding schedule than breastfed infants.

As a rule of thumb, you should aim to feed your baby 2.5 ounces of formula per pound of body weight daily, says Amy Lynn Stockhausen, M.D., an associate professor of general pediatrics and adolescent medicine at the University of Wisconsin School of Medicine and Public Health. But again, it's important to listen to your infant's cues rather than strictly giving them a specific amount of formula.

Between 1 and 3 months, your baby's appetite will increase, and they'll become more vocal about telling you when they're hungry. The AAP says that a 2-month-old baby will usually eat 4 to 5 ounces every three to four hours.

If you're feeding formula, you might want to look for one supplemented with 2'-FL HMO. These human milk oligosaccharides are naturally found in breast milk, and research has found that it acts as a prebiotic, supporting gut health and immune system development.

As a result, some researchers think supplementing infant formula with HMOs is a promising innovation in infant feeding. In addition, the Food and Drug Administration (FDA) has categorized three HMOs, including 2'-FL, as generally regarded as safe.

What to Know About Organic Formula

Most babies are ready to start solids around 6 months of age, according to the Centers for Disease Control and Prevention (CDC). However, since all babies are different, your child may follow a slightly different timeline. So, how can you know when your baby is ready?

Babies who are ready to try solids tend to show some signs, including:

Babies younger than 4 months have not developed these necessary skills, so never start solids before 4 months. When first introducing solids, aim to offer your little one about 1 to 2 tablespoons of food twice daily.

Solid food shouldn't take the place of breast milk or formula as the primary source of nutrients before the age of 12 months. Indeed, babies should still drink about 4 to 6 ounces per feeding when they're 4 months old. According to the AAP, once they turn 6 months old, they may take even more—up to 8 ounces every four or five hours.

Remember that even after introducing solids, breast milk or formula is still your baby's primary food source for their entire first year. According to the AAP, by 6 months, your baby should be consuming 6 to 8 ounces of formula at each of their four to five feedings each day. At 6 months, a breastfeeding baby should still be nursing every four to five hours.

When a baby is 6 to 9 months old, nearly all their calories should still come from breast milk or formula, says Natalie Muth, M.D., R.D.N., co-author of The Picky Eater Project. For a formula-fed baby at this age, that usually means no more than 32 ounces of formula daily.

Your breastfed babies' nursing patterns may fluctuate at this age due to growth spurts or when they need extra comfort. That's why it remains important to watch them for hunger cues rather than sticking to strict schedules and limits. If you notice your child isn't breastfeeding as often after introducing solids, the CDC recommends offering breast milk before feeding them a meal.

Since your baby is still getting most of their calories from breast milk or formula, don't stress about getting them to eat bite after bite of solid food. You can offer your child food whenever you sit down to eat—solids at this point are more about the ritual and exposure than nutrition (though it's still important to offer nutritious options!). At this age, you can offer foods such as:

To identify possible allergic reactions or digestive issues, some experts recommend introducing just one food at a time. You may want to wait on things that include a mixture of foods, like casseroles, until you've introduced those foods separately, especially if you have a family history of food allergies.

"One of the things I really like about casseroles is that if the child likes the base flavor, you can add a bunch of other vegetables to it, and he's often fine with it," says Alan Greene, M.D., author of Feeding Baby Green, who makes a pasta casserole in red sauce for his family.

If your baby seems to have an insatiable appetite or doesn't seem to be eating enough, contact a health care provider for advice.

At this age, babies should continue to have about 7 to 8 ounces of liquid per feeding. They usually cap out at 32 ounces of formula in 24 hours. "By 9 to 12 months, about half of your baby's calories should come from food and the other half from breast milk or formula," Dr. Muth says.

Growing infants tend to have an adventurous palate—they've learned eating tastes good, so don't be afraid to give them baby-friendly nibbles from your plate. If they want more, feed them more, but if they push food away, don't take it personally.

Babies like to play with their food, so also consider using yogurt or oatmeal as a dip for vegetables or whole-grain crackers. Just remember to ensure foods are prepared safely and to avoid those that are small, round, hard, or the size of a child's airway.

What Is Baby-Led Weaning? How to Help Your Infant Feed Themself

"After the first birthday, most of the calories your baby consumes should come from finely chopped table food," Dr. Muth says. To meet their calcium needs, serve whole milk in a sippy cup at meals and with snacks. The US Department of Agriculture's Dietary Guidelines for Americans recommends toddlers consume 700 mg of calcium per day (the equivalent of 2 to 3 cups of milk a day), but it's important to note that doesn't all have to come from milk.

Aiming for a set meal and snack schedule can also pay off since your child will be more hungry and thus willing to try new things at this age. Always consult a health care provider if you're unsure about feeding guidelines for your baby. 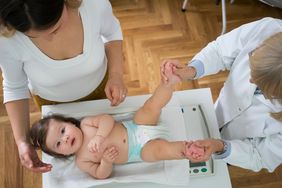 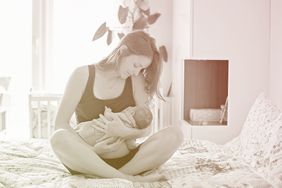 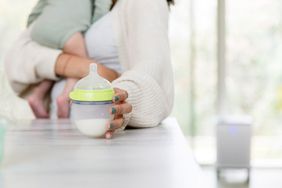