Q: When will my baby start rolling over?

A: Rolling over is your baby's first big milestone on the road to getting mobile, and it usually happens around 4 months, but a little later or earlier is totally normal. At first your baby will only roll from his belly to back; this is easier because he can use his arms to help him take off. Back-to-belly rolling comes later, usually by 5 to 6 months, or a month after he learned to roll over initially.

Your baby's first roll-over usually occurs during a tummy-time session. When placed flat on his belly, your baby instinctively uses his arms to raise his head and shoulders off the floor. This move helps him strengthen the muscles he needs to flip. And when it first happens, he'll probably be as shocked as you!

If your baby doesn't seem interested in rolling over (some babies are more content to stay put than others), encourage him by plunking favorite toys just out of his reach (to his right or left) during tummy time, or lie down near him and see if he'll roll to you. If your baby still hasn't rolled over (or attempted any other method of movement) by 6 months, mention it to your pediatrician. But before you worry, remember that many babies roll over later these days, since they tend to spend more time on their backs, thanks to being put to sleep that way (which is still the best weapon we have against SIDS, or sudden infant death syndrome).

Once your baby gets the hang of rolling over, get ready for playtime to be a lot more exciting. Most babies love flipping -- and will attempt it often -- because it's entertaining, surprising, and gives them a cool, new perspective of their environment. Remember, as soon as your baby starts even attempting to roll over, don't leave him unattended in the middle of your bed, on the changing table, or on any other high surface, even for a second. You never know when that first roll will happen.

When will my baby stand without support?

Tips to Boost Your Baby's Memory 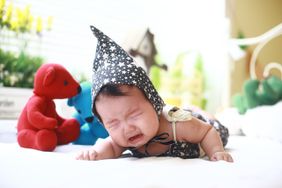