Babies grow exceptionally fast during their first year of life. Here's when they are most likely to have a growth spurt and what it looks like—plus how to tell if it's something else entirely.

Babies grow much faster in their first year of life than at any other time, except in utero. Within this accelerated period, some also experience additional bursts of height and weight gain. According to the American Academy of Pediatrics, these leaps, or growth spurts, can occur every few weeks or months. But every child is different, so it's impossible to say if or when it will occur, says Clare Bush Addis, M.D., an assistant professor of pediatrics at Columbia University Medical Center, in New York City. Read on to learn the signs so you can figure out if it's happening to your little one.

When Do Most Babies Go Through Growth Spurts?

Dr. Bush Addis often sees a small growth spurt when a newborn is 7 to 10 days old. It's early, but once baby has mastered breastfeeding/chestfeeding, they start to eat more. They'll be hungry all the time, then their growth will speed up. This can also happen when they are around three weeks, six weeks, three months, and six months old, says Leigh Anne O'Connor, a board-certified lactation consultant in New York City. By age 1, a typical baby will have tripled their birth weight and grown 10 inches.

Pediatricians aren't too invested in baby growth spurts. Instead, they focus on other benchmarks: Has the baby doubled their weight at four months? Tripled it at a year? Are they generally progressing along their own growth curve? All of these things are more important than the occasional leap.

Even though your baby can't speak, you might notice physical signs that they're going through a growth spurt. Here are four of the most common ones.

1. They are constantly hungry.

Just when you think you've figured out a feeding schedule, your baby suddenly wants to eat around the clock. In a breastfed/chestfed infant, this might mean two to four days of marathon nursing. A formula-fed baby might be dissatisfied after finishing a bottle.

"Everything is revved up in the first year of life," says Joshua May, M.D., a pediatric endocrinologist in Los Angeles."The metabolism is quick, the frequency of needing feeds is quick. Those calories are going toward growth, whether it be building reserves of fat cells or building muscle or—with the help of hormones—actually physically changing the structure of bones."

2. Their sleep patterns have shifted.

3. They are fussier than usual.

This could be a byproduct of being hungry or fatigued. There's also the possibility of growing pains. "I think it stands to reason that if there's major growth going on, tendons and muscles are being stretched in the body and that might be associated with some pain," says Dr. May. "We certainly see that all the time in the older age range."

4. They have mastered new tricks.

It's a bit of a stretch to link your child's newfound ability to clap or grasp a toy with a specific growth spurt. But a baby's brain physically enlarges along with the rest of her body as she learns to navigate the world, causing her skull to grow and fuse together. That's why a baby's fontanelle, or "soft spot," is closed or nearly closed by age 1, says Dr. May.

How to Know if It's Something Else

Growth spurts can be easy to confuse with other physical issues. An overly sleepy or fussy baby could be sick, while one that seems constantly hungry could be trying harder to feed itself due to incorrectly sized nipples on their bottles or a low milk supply. If your baby is peeing and pooping well, you can assume that supply is not an issue and expect the feeding frenzy to pass. Either way, if you sense something is off, contact your pediatrician.

Don't Forget to Check the Charts

Growth charts are especially useful when you're wondering how your baby's measurements stack up against others of the same age and sex. According to the Centers for Disease Control and Prevention (CDC), anyone caring for a child under the age of 2 should use the World Health Organization's growth chart (once your child is 2 or older, the CDC one is best). Place baby on a firm, solid surface and measure them from head to foot, then remove their diapers and clothing and weigh them, preferably using a baby scale. If you keep tabs on their growth, you should easily spots any spurts. 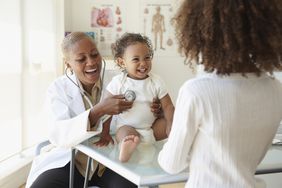 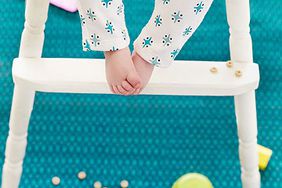