Over the course of your little one's first year, their language skills will grow by leaps and bounds. Here's how to encourage your baby to talk even more.

It's one of the biggest questions of your baby's first year: Will they say "Mama" or "Dada"? You'll probably hear that special first word by the time they turn 1—and then there's no stopping your little chatterbox. Around 15 months, they'll start using simple consonant sounds to form words such as "up," "more," and "baby." At 18 months, your baby's vocabulary explodes and they should begin picking up several new words a day.

Although you can't rush your child's natural development, you can help boost their language skills. "The best thing you can do is talk to your 1-year-old continuously throughout the day," says Michelle Macias, M.D., professor of pediatrics at the Medical University of South Carolina in Charleston. "You may feel silly saying, 'Now I'm putting the potatoes into the pot,' but this constant exposure to language will help [them] learn."

Check out these simple ways to get the most out of your toddler talks.

When it comes to a 1-year-old's vocabulary, they understand a lot more words than they can actually say. "For 1-year-olds, using gestures as nonverbal communication is an important skill you can encourage," says Dr. Macias.

When your toddler waves at you, chime in with "Bye-bye!" or when they point at something, ask, "Do you want the cup?" You can also play games with gestures, like pat-a-cake, or make motions with your hands when you sing "The Wheels on the Bus" to help them connect the words with the actions.

Although it's OK if your 1-year-old calls their bottle "ba ba," you and your partner should use the proper words to make sure that you're not always talking down to your toddler. "Parents need to stay one step ahead of their child's stage," says Stuart Teplin, M.D., a developmental and behavioral pediatrician in Concord, North Carolina. By using real words instead of baby talk, you're helping your baby to expand their vocabulary.

Don't Just Save Books for Bedtime

Parents often make the mistake of rushing through the pages of a book because they're tired and trying to get their child to bed. Instead, read to her throughout the day when you're not rushed. Talk about what you're seeing in the pictures. Say, "Look at that little boy. Does he look happy or sad?" Even asking your child what sounds the animals in the pictures make gets them practicing speech skills.

It is never too early to begin reading to your baby. The American Academy of Pediatrics (AAP) recommends that parents read out loud to their babies beginning in infancy. In a 2017 study, the AAP found that babies who were exposed to reading from infancy had higher rates of literacy four year later and were better able to adapt to reading in elementary school.

The Benefits of Reading to Your Baby
04 of 09

Organize activities with kids your child's age. Even if a group of 1-year-olds isn't very chatty, being around peers gives them the chance to listen, interact, and test-drive their vocabulary in a social setting. Help out by saying, "Wow, she's giving you the bear. Say, 'Thank you!'"

Around 18 months, toddlers start using two-word combos to communicate. "Usually, they'll put together an action plus an object, like 'drink juice,' or 'read book,'" says Diane Paul, Ph.D., director of speech pathology at the American Speech-Language-Hearing Association in Rockville, Maryland. Teach your child to string words together by adding one or two: If they say, "Ball," you say, "Big ball" or "Throw your ball."

When your child tries to say something, acknowledge the attempt in a positive way without correcting them. "Respond to the content of [their] message, rather than to how perfectly [they say] it," says Paul. For example, if your child notices your partner leaving and says, "Daddy bye-bye," jump in with "Yes, Daddy's going to the store."

If your baby is curious about something, they'll want to know the words that go with it. Pay attention to what's catching their interest, and talk about what they're seeing: "That's a cute white cat by the tree."

Try following their lead as you go for your daily walk or run errands together. Make a point to note shapes, colors, and other details to help broaden your child's perspective and attention.

"Toddlers are starting to add inflection to their voice to ask questions like, 'Out?'" says Dr.Teplin. They're also learning that you talk softly when you're indoors and you can be louder outside. Play with funny voices—such as a gruff bear voice or a squeaky mouse one—so your child can copy you and practice different sounds and pitches.

Toddlers love music, and singing is a great way to build language. Teach your child plenty of simple songs, especially ones that rhyme ("One, Two, Buckle My Shoe") or make lots of sounds ("Old MacDonald"). But don't fall into the trap of plopping them down in front of the TV because you think they'll learn that way.

Although educational shows can be helpful, right now it's better to have one-on-one time with you. "Toddlers aren't wired to learn from TV," says Dr. Macias. "What they really listen to and respond to is real human voices and interaction." 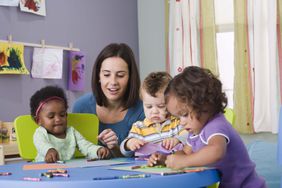