There's no doubt about it: Your baby is a born charmer. And there's a lot you can do to help build her social skills.

Your baby is a people person right from the start. Even in the first few weeks of life, infants prefer the sight of a human face over that of any other object. And by the time they begin flashing those melt-your-heart smiles (usually when they're around 2 months old), they're ready, willing, and eager to meet other people. "Babies are hardwired to be social creatures," says Alison Steier, PhD, clinical director of the Arizona Institute for Early Childhood Development, in Phoenix.

And they're constantly observing and learning from people, even if we're not aware of it. In a recent study, Yale University researchers had babies 6 to 10 months old watch a puppet show in which some of the characters were helpful and others were uncooperative. Afterward, they observed that the babies happily babbled at the nice puppets and expressed a clear dislike for the nasty ones. These results showed that babies possess a level of social savvy usually associated with much older kids. That's great news for parents, because it means there's plenty you can do -- right now -- to teach your baby to be the life of the party.

Have a Conversation (Sort Of)

Long before your baby says his first word, he's telling you what he needs -- with his cries, coos, gurgles, flailing fists, smiles, and grimaces. "If you coo or smile back at him in the early months, you'll teach him that the world is a friendly, happy place," says Craig T. Ramey, PhD, coauthor of Right from Birth. That will help instill in him a sense of trust, which is essential for getting along with others and, ultimately, forming friendships.

Researchers at York University, in Toronto, found that the more tuned in parents are to their babies' emotions and interests, the faster their little ones develop socially and cognitively. The takeaway: "If your baby smiles at you, acknowledge it -- 'Oh, you're smiling, you must be happy' -- and figure out what he's smiling at," says Maria Legerstee, PhD, who headed the York study. And when he turns his gaze away, try to find out what he's looking at ("That's called a camera. It's very shiny, isn't it?"). This shows him you understand his reaction.

Get to Know Your Baby's Quirks

Take your child's temperament into account when you introduce her to new people. Some babies are comfortable being handed off to strangers, while others are cautious even around their grandparents. If your child is the timid type, don't thrust her into someone else's arms. "If you push your child, she could end up becoming more reluctant to socialize the next time," says Miller Shivers, PhD, clinical psychologist at Children's Memorial Hospital, in Chicago. One smart solution: Invite people to visit at your baby's "happy" times of day, when her energy level is high and she's more likely to be in a friendly mood.

Your baby isn't ready for playdates, but he'll benefit from being around other kids. Alexandra Smith Ozerkis, of Princeton, New Jersey, joined a new moms' group soon after her son, Davis, was born. "The kids don't really play together, but they do react to and learn from one another," she says. One example: At 10 months, Davis was struggling to crawl. "Then he saw two of his friends doing it, and that's all he needed to get going."

It's great to expose your baby to adults too, but don't overwhelm him -- especially in the early weeks. Invite one or two close friends or family members over, and then gradually broaden his social circle. Make sure you, your spouse, or a familiar caregiver stays in sight at all times so your child feels safe.

Introduce Her to Older Kids

If you've ever seen a baby stare rapturously at an older sibling, you know: Infants love big kids. "A baby's first smiles and laughs often come from watching an older brother or sister," says K. Mark Sossin, PhD, professor of psychology at Pace University in New York City. Big sibs provide a constant source of inspiration for milestones like walking, eating, and talking, and their silly sense of humor also appeals to babies. If your infant is a firstborn, then a cousin, neighbor's kid, or family friend may have a similar effect.

When Casey Hennigan was 7 months old, she was the youngest member of her daycare group. That meant she hung out with 1-year-olds every day. "She loved watching them and tried to do everything they did, like standing, even though she wasn't quite ready," says her mom, Kelly, from Cherry Hill, New Jersey.

Show Her the World

When Katie Tam was a baby, her mother, MJ, took her along on errands and made a point of introducing her to the people they met. "I did it with my older kids, and it really helped them become more outgoing," says the Chicago mom of three. It's a good idea to start with familiar faces (such as neighbors and friends) and work up gradually to more challenging situations, like saying "hi" to another customer in the checkout line.

Once she starts making eye contact and smiling at strangers, your baby is truly becoming a social being. She's ready for larger gatherings, such as a family party or a church event. A bonus: The more you enjoy yourself, the better it is for your child, who will learn that it's fun to be around other people.

Be a Friendly Role Model

You don't have to leave the house to show your baby how to be outgoing. When your husband walks through the door, say, "Let's greet Daddy. 'Hi, Daddy. How was your day?'" Smile and use a warm voice when answering the phone, and then tell your child who called ("That was Grandma. She's coming over to visit later. Isn't that exciting?"). You can also take out dolls, stuffed animals, or puppets and throw a pretend party. Have the toys greet and chat with one another, and show them taking turns and being polite. Your child won't be ready to mimic these behaviors for quite some time, but it's never too early to introduce them.

Sometime between 8 and 12 months, most babies develop an intense shyness around strangers. This anxiety typically peaks around 18 months before gradually decreasing. While it can make socializing difficult, it's actually a positive sign, since it means your child is forming a strong attachment to you. These tips can help your child feel more comfortable.

Your baby makes major social strides in her first year.

She can differentiate between objects and people -- and almost always prefers people.

He makes eye contact and will often stay fixed on your face when you smile at him.

She'll respond to your smile with one of her own -- her first "social" smile.

He makes sounds when spoken to, a sign that he's starting to grasp the essentials of conversation.

She'll begin to play one-on-one games with you.

He'll become wary of strangers but feels a very strong attachment to Mommy, Daddy, and other caregivers.

She'll start to develop a sense of humor and show a preference for some people over others.

Originally published in the December 2008 issue of Parents magazine. 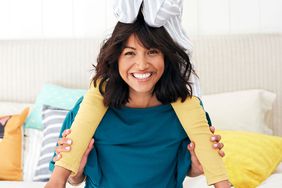 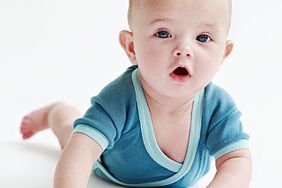