Babies need strength and coordination to grow into active toddlers. Here's what you can do to help them reach their major motor milestones.

The way my first son moved in utero, I swore he'd be kickboxing at birth. Of course, like every newborn, all he could do in those early days was flail his tiny arms and legs. His head was so wobbly that if I held him upright in front of my chest, it would bob and weave before finally dropping onto my shoulder.

Babies have a long way to go before they can toddle swiftly across a room. To accomplish each motor milestone -- whether it's grasping, rolling over, or walking -- an infant needs the right mix of muscular strength, balance, coordination, cognitive development, and, especially, desire. Fortunately, "children have an incredible quest for mobility that helps them pull up against gravity and get on their feet," says Gordon Williamson, Ph.D., an associate clinical professor in the rehabilitation medicine department at John F. Kennedy Medical Center, in Edison, New Jersey. Each physical skill your child conquers becomes a building block for the next, and you can do a lot to help move things along. Follow our guide to the milestones your baby will master in the first 18 months of life. (Age ranges are approximate.)

After your newborn has learned to steady her head, she'll begin working on push-ups. She'll struggle to raise herself on bent elbows and later to fully extended arms. "Babies spend the first six months of life gaining control of their posture, which sets the stage for virtually all other movements, including reaching and grasping," says Carl Gabbard, Ph.D., author of Lifelong Motor Development (Allyn & Bacon, 3rd ed.,1999) and director of the motor-development laboratory in the department of health and kinesiology at Texas A&M University, in College Station.

Shifting her weight from side to side, your baby will develop arm strength and coordinate her shoulder muscles. This will eventually enable her to reach overhead and diagonally as well as hold her arms up in the air. With a stable upper body, she will no longer need her hands to support herself, leaving them free to explore. Your infant is also refining head control by holding her head off the floor and turning it from side to side.

Skill builder: Place your baby belly-down on the floor for short, frequent practice sessions throughout the day (not at naptimes or bedtime, however, because of the risk of SIDS).

Reaching and Grasping: 4 to 5 months

At birth, your newborn's fists are clenched. In the first weeks, he will wave his arms spontaneously and automatically close his hand around any object placed in his palm. When these reflexes disappear, at about 3 to 4 months, initial attempts to control his hands will be jerky: He'll use both hands to corral an object. By 6 or 7 months, your baby will be better at reaching and sitting, too, which means he can better examine things that interest him. And though your infant can let things simply drop from his hands, he won't be able to release an object efficiently and accurately until he's about 18 months old, Dr. Gabbard says.

Skill builder: Give your baby a variety of objects to reach for. Offer toys that fit in one hand as well as bigger objects that require a two-handed grip. Vary their shape, too: Picking up a ball, for instance, requires different skills than grasping a cube. And place both still and moving objects within reach, sometimes to your child's side, so he must turn his body to grasp them.

Rolling Over: 4 to 6 months

As your infant gets better at push-ups, she'll practice reaching in that position. And one time, with a hand up, she may lean just a bit too far to one side and suddenly find herself faceup -- startled but thrilled. Eventually, though, she'll learn to turn over intentionally.

This first awkward flip is called a log roll because the upper and lower halves of the body move as one block. At about 6 months, your baby will be able to rotate her torso; her pelvis will initiate the roll, and her shoulders will follow. Turning at the waist will allow her to look around when she masters sitting and to alternate her legs and arms as she learns to walk.

Once she's on her back, your baby will kick her legs, lift her bottom off the floor, and bring her toes to her mouth -- moves that strengthen her abdominal muscles. Soon she'll master the opposite roll: Lifting her legs in the air, she may fall to one side and scramble right onto her belly.

Skill builder: Give your baby plenty of floor space and time to roll and flip as she pleases. Toys, such as a baby gym, can also enhance development by encouraging kicking and reaching.

All the floor work your baby has done up to this point is helping develop his back and abdominal muscles. He can now control his posture and stay upright -- although it may be a while before he can sit without support. For stability, your baby relies on his vestibular system, the body's mechanism for maintaining balance and sensing movement through space. Operating in the inner ears, this system receives information about the body's position and sends it to the brain so your baby can make adjustments in his posture and alignment to steady himself.

As your baby nears 8 months, he may reach across his body to grab food or toys. Moving the right hand into the left space of the body, and vice versa, uses both hemispheres of the brain, an important step in improving coordination.

Skill builder: Sit your baby down among some tempting objects. Place a few items at his sides so he works his midsection while he turns. Have cushions around, in case he's still wobbly. Rock and swing your baby, bounce him on your knee, or dance together to give his vestibular system a variety of sensations.

When your baby first tries to crawl on her hands and knees, she'll probably be stuck in neutral. Curiosity, however, will lead her to experiment with different forms of forward motion. She may push her palms against the floor (and likely scoot backward), push her feet against the floor (and fold in the middle), pick up one hand (and fall on her face), or kick her feet (and land on her face again), explains Eugene Goldfield, Ph.D., a research associate at Children's Hospital and Harvard Medical School, in Boston. Crawling can actually take on many forms: "bear walking" on hands and feet with her bottom high, pulling with forearms and belly on the floor, scooting around bottom-down, and the classic creeping on hands and knees.

Don't try to push through this horizontal phase. "There's no advantage to putting an infant in play devices or jumpers that encourage early standing," says Jane Case-Smith, Ed.D., an associate professor of occupational therapy at Ohio State University, in Columbus. Research shows that using walkers may actually delay development, because their large trays block the child's view of her moving feet, depriving her of feedback that's critical to physical and mental growth.

Skill builder: Let your baby crawl on a variety of safe surfaces: Line cushions on the floor, take her outside on the grass, or give her a gentle incline to scale.

Pulling up to a standing position is often easier for babies than learning how to get back down. In an effort to fight gravity, your little one may start out by tensing his leg muscles and stiffening his torso. Without enough midrange control, he'll likely lower himself by plopping down. In time, though, he'll practice squats as he hangs on to a crib railing or other furniture.

While standing, your baby may pump back and forth and shift his weight from side to side. This sideways weight shift gradually segues into sidestepping, or cruising. "This motor skill is important, particularly when the baby cruises by holding on to furniture rather than a parent's hands," says Dr. Case-Smith. "This allows him to be in better control and decide how big a step to take and the timing of that step." Cruising also helps develop balance reactions in the feet, as the toes grip the floor, and works the hip muscles -- the final fine-tuning before independent walking.

Skill builder: Give your baby access to sturdy furniture that's at a good height for him to pull up on. He should be upright, not bent over, while standing or cruising. Wheeled toys that your child can hold on to and push around will also encourage movement.

Once your baby gains control of her upper body, has learned to turn at the waist, and can alternate her legs, she's ready to bring all these motor skills together for the big finale: taking her first unaided steps. She'll adopt the distinct posture of a new walker: feet wide apart, legs slightly crouched, belly protruding, and arms held high. This strange gait provides a base of support. Upheld arms not only help your toddler achieve balance but stabilize her upper body, so she can concentrate on her lower half.

Because babies don't yet have the balance to stay on one leg for very long, they quickly slap their raised foot down and tend to toddle in short steps. Learning to walk is such a demanding task that it's not unusual for a baby to lose some previous motor skills temporarily. Researchers have found, for example, that new walkers revert to double-handed reaching even though they've mastered single-handed grabbing months before. The theory is that the brain needs to reorganize itself as a new skill is learned. After a few weeks, when arms are no longer held high during walking, toddlers return to one-handed reaching.

Skill builder: Give your baby plenty of safe areas to walk in at home so she can learn to negotiate all kinds of floors. Barefoot is best indoors. Once she's somewhat steady on her feet, dress her in soft, flexible shoes and let her walk outside on grass. Soon your toddler will be hard to stop, as she parlays her walking skills into running, climbing, jumping, hopping, and, maybe someday, kickboxing. 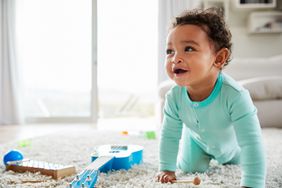 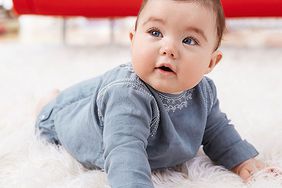 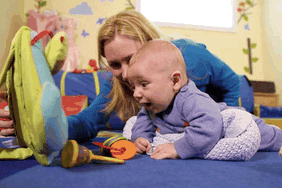