4 Exercises to Help Baby Get Stronger

These simple exercises will help your little one grow up big and strong.

It may seem like your baby spends a lot of time lying around, but she actually gets in a vigorous workout every day. Whether she’s batting at an object, kicking her legs, or squirming during a diaper change, she’s exercising her little muscles. And all that strength-building is essential to her motor development: She’ll need strong muscles to hold up her head, roll over, sit up, crawl, and eventually walk. In addition, physical activity pays off in the form of more restful sleep, less fussiness, and a happy infant who is eager to play and learn, says Meena Chintapalli, M.D., a pediatrician in San Antonio. These easy exercises will help you become your baby’s own personal trainer.

Your infant spends the majority of his time on his back. Turning him over onto his stomach helps build the muscles in his neck, arms, shoulders, back, and stomach, says Robert Pantell, M.D., author of Taking Care of Your Child. Daily, supervised tummy time can begin as early as his first day home from the hospital, according to the American Academy of Pediatrics. Start with a couple of three to five minute sessions. After you place your baby tummy down on a blanket or playmat on the floor, get down on your own stomach to keep him company. Smile, talk, sing, make funny faces, jiggle a set of keys, or put a toy within his grasp. Engaging your baby makes him want to look around, reach, and kick, which is what helps build the muscles he’ll need to roll over, sit up, and eventually crawl, says Dr. Pantell. At first, he may fuss during tummy time, but with practice and stronger muscles, he should begin to enjoy it. As his strength and tolerance increases, gradually work up to at least 20 minutes of tummy play each day. Continue even after he’s able to roll over on his own.

Pulling your baby up into a sitting position is another good way to strengthen the muscles in her shoulders, core, arms, and back, says Steve Sanders, Ed.D., author of Encouraging Physical Activity in Infants. Even though you’re doing the pulling, your baby will naturally flex her abdominal muscles and work to keep her head in alignment with her body, which helps strengthen the muscles and build balance. While your baby is on her back, grasp her forearms and gently pull her toward you. You can start doing sit-up exercises around 6 weeks; if she’s too young to support her head, instead of pulling her by the forearms, place your arms behind her shoulders with your hands behind her head to keep it from flopping back. You may only be able to pull your baby up an inch or two at first, Dr. Sanders says, but as she gets older she’ll go farther, eventually advancing into a full sitting position. This exercise is fun for your baby since she’s getting closer to your face, but you can make it even more entertaining by being extra animated and giving her a kiss at the top of each sit-up.

Did your mom ever tell you to cycle your baby’s legs to help relieve gas? Well, it’s not only a natural method for pushing air out of his system—it’s also a good way to work the legs, hips, knees, and abs. This move helps increase flexibility as well as his range of motion. “Put your baby on his back and gently move his legs up and around, as if he were pedaling a bicycle,” says Dr. Chintapalli. Coo, smile, sing, or make choo-choo or vroom noises while you do the motion. Repeat the movement three to five times, take a break, and then repeat. Keep going as long as your baby shows interest by smiling, making eye contact, and kicking.

Picking up objects is a great way to build your baby’s grasping ability, improve hand-eye coordination, and help develop the muscles in her shoulders, arms, and hands, says Angela Thacker, regional director of The Little Gym, a national chain of children’s gyms. As soon as she starts grasping at items, usually around 3 or 4 months, use what you have around the house—rattles, small toys, and other objects of varying sizes and shapes—as her personal weights. Sit your baby in her high chair or bouncy seat and place a small assortment of these items in front of her. Encourage her to lift one, check it out, put it down, and then lift it again or move on to a different one. You may have to demonstrate how it’s done the first few times, but she’ll get the idea quickly, especially if her “weights” make a sound, light up, or offer some other reward for a job well done.

How Baby's Hand Skills Develop
Was this page helpful?
Thanks for your feedback!
Tell us why!
Related Articles 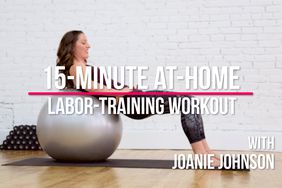 The Best Exercises to Prepare for Labor and Childbirth 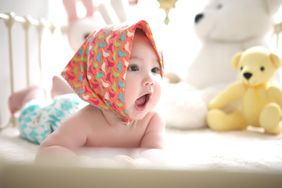 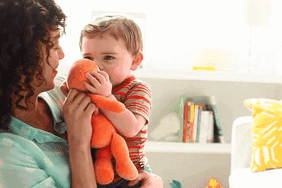 How to Encourage Motor Development in Infants 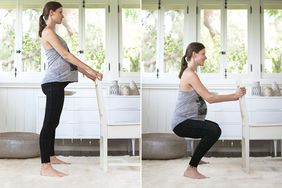 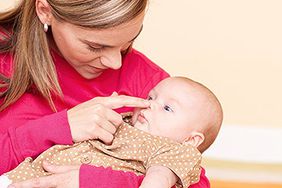