How to tickle your child's funny bone.

Somewhere between that first smile and that first recognizable syllable comes the magical sound of baby's first laughter. It may be a reaction to kisses on the belly, a tickling of toes, or a bouncy ride on Dad's knee. The triggers vary, but the laughter is inevitable. "In all cultures, it starts to develop in babies between 3 and 4 months," says Robert R. Provine, PhD, psychology professor at the University of Maryland, Baltimore County, and author of Laughter: A Scientific Investigation (Viking). That said, don't worry if you haven't heard guffaws by 4 months. "As with all milestones, some babies may laugh a little later," says Sheila Gahagan, MD, a clinical pediatrics professor at the University of Michigan's C.S. Mott Children's Hospital.

One of the first times Selena Pizzo, of Glastonbury, Connecticut, remembers her son, Jonathan, cracking up was when big sister, Ashley, snapped up the sun shade on her car window. "It rolled up quickly, making a clicking sound, and Jonathan, who was about 5 months, burst out laughing. One day, when he was cranky and crying, I asked Ashley to do the shade trick again, and it worked -- he immediately started laughing!" Of course, the things babies and toddlers find funny change as they grow, often reflecting the developmental tasks they're struggling with, explains Lawrence Kutner, PhD, co-director of the Harvard Medical School Center for Mental Health and Media.

Between 8 and 10 months, most babies delight in playing peekaboo, precisely because they're grappling with "object permanence," or the idea that things still exists, even when out of sight. "When you hide a toy or your face behind a cloth, it creates a certain tension for the baby, who is learning about object permanence," notes Kutner. "With infants, the game doesn't register. And for the older child who's already mastered object permanence, the game becomes boring."

Most children crave more-elaborate antics at this stage. "A year ago, just holding a blanket over my face and dropping it was enough to get my son laughing," says Tanya Remer Altmann, MD, a Los Angeles pediatrician and the editor of The Wonder Years (Bantam Books). "Now that he's 18 months, we still play a version of peekaboo, but I hide behind the couch and jump out at him and he squeals and we run around the couch hiding from each other."

Such games are big hits generally with kids once they're mobile. Announcing "I'm gonna get you!" while crawling or toddling after your child is sure to elicit squeals of delight. Physical humor also typically gets big yuks at this stage: "Our 12-month-old, Teddy, laughs whenever my husband and I dance around or do silly stunts, like pretending to fall down," says New York City mom Anne Witt. Overexaggerated sneezes get 9-month-old Jack Zuch laughing, says mom, Therese, of Weston, Connecticut.

Around this period, babies also begin to test limits, and this, too, can give way to giggles. "I'll tell Teddy not to touch his diaper pail, and he'll look at me and touch it and just start laughing," says Witt. Laugh at such shenanigans, and you're sure to see them again and again. No longer content to be part of the audience, laughing at your antics, your child is now eager to entertain you -- a sure sign of his growing autonomy. And he'll do almost anything, such as making silly faces or noises.

It's typically at this stage that kids start to comprehend the correct order of things, and the absurd or incongruous becomes funny: "Once babies figure out how the world is supposed to be, anything that turns the familiar on its head just a little -- Daddy pretending to drink from a bottle, Mommy trying to put on baby's shoes -- will get the laugh," notes Provine.

But once a child becomes more verbal, wordplay becomes fodder for comedy. I recently won belly laughs from my daughter's preschool classmates by replacing the predictable "duck, duck, goose" with "duck, duck, alligator."

Three-year-olds may start to get a few simple jokes, but by age 4, most kids will revel in knock-knock comedy or puns, and may even try cracking a few of their own. (Before this age, kids take everything completely literally!) While the punch lines may leave you scratching your head, laugh anyway. Be wary, however, of chuckling at any words or behaviors you would rather not hear or see repeated, warns Dr. Remer Altmann. "'Poopy head' jokes are par for the course with 3-year-olds -- and laughing at them will only provoke more." Her advice: "Ignore it; if something's not getting attention, they'll stop."

The Upside of Laughter

Throughout life, laughter can bring serious rewards. Studies show that most people value a sense of humor as a trait they would like to possess, and one they look for in friends and mates. If you're not a natural comedienne, try this: "When I blow raspberries on my 15-month-old's belly, he laughs so hard he usually gets the hiccups!" says Jennifer Yacoub, of Newark, Delaware. With young kids, it's a surefire laugh-getter.

Marguerite Lamb, a mother of two, lives in Glastonbury, Connecticut.

Games to Play in Your Baby's First Year 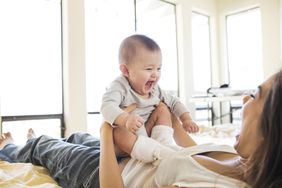 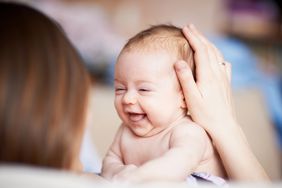