Play-by-Play: How Your Baby Learns

It may look like child's play, but your baby is hard at work learning while she practices tummy time or the two of you roll a ball together. Find out how your little one is developing more and more with this month-by-month guide to playtime learning.

Let the games begin! In baby's world, playing is synonymous with learning and it goes way beyond the ABC's.

Living and Learning: New babies are best able to see patterns in black and white, so they focus on objects with sharp color contrasts. Toys won't be of much use yet, but there are still ways to keep your baby entertained, like hanging a mobile above her crib. Babies' eyes are naturally drawn to things in motion, and by watching moving objects, they learn to coordinate their eyes to move at the same time. But what new babies crave most of all is contact with you. In fact, Jill Stamm, PhD, author of Bright From the Start, says the best toy for a new baby is your face. To her, you're three times the fun: the sound of your voice makes her feel reassured and comforted; your eyes and mouth create a sharp color contrast against your skin; your mouth is fun for her to watch as you talk to her.

Game Time: Play "This Little Piggy." She'll love the close contact with you and listening to your voice.

Living and Learning: By your baby's fourth month, he'll morph from spectator to active play participant, lifting his head, bringing his hand to his mouth, and grasping toys. "When kids start mouthing, holding, and shaking, it's a way for them to learn about things in the world and whether they're soft, hard, or noisy," says Margret Nickels, PhD, an instructor at the Erikson Institute in Chicago. By shaking a ball and then a rattle, he finds out that the rattle makes noise; after putting a block in his mouth, then a banana, he finds out that the banana tastes good and the block -- not so much. Just ask Elizabeth Matheis from Parsippany, New Jersey: "My 5-month-old enjoys reaching for pretty much anything she can gnaw on." What is it about the mouth that seems to fascinate babies so much? That's where they have the most nerve endings, and by mouthing objects, they're working two senses at once, taste and touch. Plus, it's a movement that comes naturally to them, says Jon Korfmacher, PhD, an associate professor at the Erikson Institute. "Babies have a natural reflex of putting their fingers in their mouth to soothe themselves."

Game Time: Give him a plastic bowl and a couple of wooden spoons and let him bang away.

Living and Learning: At this age, your baby has played with enough toys to know that some things are hard, some are heavy, and some are yucky. Now he wants to know, What happens if...? Let's say you're preparing lunch for your almost-1-year-old and you've given him a toy car to play with while he waits. He knows that he can push it around on his high chair tray. So he throws it, and sure enough, it falls. When you pick it up and give it back to him, he wants to know, Will it fall again? Will I get the same reaction from Mom? By repeating this fun (for him) game, he begins to understand that he's causing the toy to fall, that it'll fall every time, and that Mom will probably keep picking it up -- and he revels in this discovery. "It feels good to know what comes next," says Stamm. "It helps us feel like we're in control."

Game Time: In the bath, give your baby cups of different sizes for her to fill with water and dump out. She's learning basic principles about the world, like shape (the cup is round) and size (the bigger cup holds more water). Give her blocks so she can make a tower -- then knock it down. By the time of her first birthday, your baby has the hand coordination to stack. And toppling it? Well, it's just fun to know she's going to make a mess.

Living and Learning: At this age children will watch your daily routines -- cooking and cleaning -- and since it looks like so much fun, they want to try it too. By acting out the things they see, they're figuring out social roles, Korfmacher says. And the benefits of playing house don't stop there: "Kids who engage in imaginative play are more verbal than those who don't, and they use more creativity in problem solving," says Nancy Close, PhD, assistant professor at the Yale Child Study Center. When your toddler tells her doll, "Time for bed," she's playing with language and working through the bedtime dilemma. By acting out the role of Mom, your daughter is "putting herself in a situation where she needs to figure things out from another perspective," says Stamm. Pretend play can also be a way for your child to express the emotions she doesn't yet know how to articulate, Close adds. If your daughter's teddy bear is suddenly covered in Band-Aids, she could be anxious about going to the doctor.

Game Time: Make a playhouse out of a large box, then let your daughter's imagination go wild!

Originally published in the September 2009 issue of American Baby magazine. 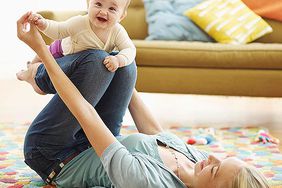 Check Out My Moves, Mom!

How should I play with a 1-month-old?