Even newborns want to play. Here's an age-by-age guide to the best games for babies.

Never Too Young for Fun

Something about the stuffed animal we dubbed "crinkle puppy" for its crinkly sound when squeezed left my daughter Emma, 3 months at the time, smiling each time I placed it in front of her. Maybe it was the contrasting colors that held Emma's attention. It could have been the way I often "spoke" for the puppy, giving Emma an idea of what a real puppy would sound like or what it might say to her if it could talk. "Babies are so eager and curious," says Michelle Gross, a developmental psychologist who directs a Centers for Disease Control-contracted parenting research project for kids from birth to age 5. "Your interaction with your baby -- keeping her happy and giving her opportunities for playing and learning -- is setting a foundation for how she'll approach the world, really for the rest of her life."

A particular toy might snag your child's attention -- thank you, "crinkle puppy" -- but never underestimate your own power to produce a smile, Gross says. Babies are most amused by your behavior when you laugh, make funny noises with your mouth, or open your eyes really wide. A guide to what makes her happiest, and why, during those early weeks and beyond:

Around 2 months, she also might smile or coo happily at high-contrast primary colors and patterns placed within her view. Try hanging a simple mobile above her crib. She'll like the mobile's motion and bold patterns.

Even at this young age, babies will like imitation games. It starts with something she can already do, like form her mouth into an "O" or stick out her tongue. "You can try, when you're eye to eye, making an 'O' with your mouth and seeing if she does it. Then stick out your tongue and see if she does that too," suggests Judith Myers-Walls, an associate professor and extension specialist in the Child Development and Family Studies Department at Purdue University, in Lafayette, Indiana.

Make your daily routine fun for your baby by injecting a bit of silliness -- greet her with the same pet nickname when she wakes up, or sing the same song as you get her dressed, or playfully drip water onto her tummy during bathtime.

By 3 months, she may grasp, say, a rattle with your help, but she won't fully understand that she's the one shaking it.

With your baby on his back, look him in the eyes and ask, "How big are you?" Gently stretch his arms over his head and say, "So big!" He'll like the repetition of this game and the sensation of your moving his arms in a way he can't yet do on his own, Myers-Walls says. Showing your baby his reflection in a mirror might also produce a smile or two -- possibly even a giggle -- because babies love seeing baby faces. He doesn't yet fully get that he's the baby in the mirror, Myers-Walls says, but he'll like that as he moves, so does the baby before him.

Just being plain silly sparks some serious smiles, Barbara Isaacs found when her daughter Kate was this age. "One of the first things that made her laugh was gently putting her belly on top of our heads, almost like a hat draped over us," says Isaacs, of Lexington, Kentucky. "She cracked up hysterically."

As you play with your baby, he'll like hearing from you, so reciprocate his happy sounds. "If your baby is making a cooing sound, coo back," Grus says. This back-and-forth exchange helps foster attachment between you and your baby, Myers-Walls explains.

His memory is growing now, too, so what left him laughing yesterday -- hearing his sister sing a silly tune -- might make him chuckle days later when she does it again, Gross says.

Play a modified game of airplane with your baby by lying on your back, knees bent, and placing him on your shins. Make whooshing sounds as you gently "fly" him back and forth and side to side.

Toys that allow your baby to push a button and watch something pop up are sure to induce a smile. I remember adding voices to a pop-up toy featuring a farmer, cows, horses, and sheep. Emma would bust out laughing at my deep "Farmer Fred" voice.

Making dinner and need a distraction for your baby? Offer up a couple of pots and pans along with a wooden spoon. He'll like knowing he's capable of creating such a racket. Speak to him as you both "cook": "Mommy is making mashed potatoes for dinner tonight. What are you making? Looks like green beans! Stir 'em up!"

Get physical with your baby: holding her securely in your arms, sing a song or silly chant you make up yourself, and turn in circles. She might also like for you to bounce her gently on your knee or dance with her to upbeat tunes.

Another idea: Try setting up a couch cushion obstacle course, Myers-Walls suggests. Place cushions on the floor and show your baby how to climb over and crawl from one to the other.

For his interest in pretend play, provide props such as plastic dishes and a blanket for an impromptu living room picnic. Reverse roles so that he gets to be the parent and you play the child -- you might let him pretend to put you to bed before he goes down, for example. Allow him to "help" you around the house by giving him a washcloth and spray bottle filled with water. Or place an old sock on his hand and let him help you dust. "It's an opportunity for him to feel good and make Mommy happy," Grus says.

Heather Johnson Durocher, a mother of three, is a writer in Traverse City, Michigan. 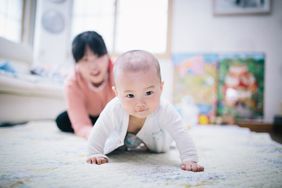 10 Things You Taught Your Baby Today (Without Even Trying) 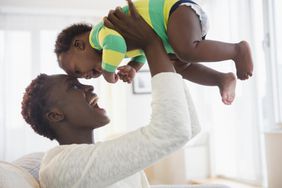