Does a baby's size at birth offer any clues into future stature as an adult? We've broken down a few ways to predict your little one's future height.

If your baby tops the length charts, you might expect them to tower above their classmates one day. But a long infant won't necessarily become a tall adult—just like short babies don't always turn into small-statured people.

In fact, a fetus' size is largely determined by the placenta's health. Since the placenta's main job is to both protect and provide nutrients to a growing fetus, the availability of quality nutrition to feed the placenta is also important. Of course, there are other factors during pregnancy that can also impact the growth of a fetus. For example, babies born to parents who developed gestational diabetes during pregnancy are often larger than average as a result of the high blood glucose levels associated with the condition.

Once babies are out of the womb, though, all bets are off. Big newborns might soon drop a couple of curves on the growth chart. It's also not unusual for small or average-size babies to grow rapidly and gain percentiles in the first two years of life.

So with all of this variability, is there any way to predict your baby's future height? As it turns out, there is no way to predict the future height of your child with certainty. That said, factors such as genetics, nutrition, and medical conditions will play important roles. Here's a baby height predictor guide for parents everywhere.

How Tall Will My Baby Be?

You can look at your family tree to get a sense of your child's future growth potential: Genetic history is the number-one influence on their growth, says Lynne Levitsky, M.D., chief of the pediatric endocrine unit at Massachusetts General Hospital in Boston. A child whose parents are both taller than average, for example, is likely to be taller than average too. On the other than, if both parents are shorter than average, their children probably will be short too.

Predictions based on the growth chart

One simple method to predict your child's future height is to follow the pediatrician's growth chart during routine checkups. Growth charts have been used since 1977 to follow trends in weight, height, and head circumference along a set of curved lines as your child grows. These curved lines correspond to percentages of the U.S. population of kids and can provide your pediatrician with information to help determine the overall health of your child.

By following a growth chart, however, your doctor can spot warning signs that may point to certain underlying health conditions. For example, if your child has been steadily growing but suddenly appears to have dips or spikes on the growth chart, that information can help your doctor pinpoint things like nutritional deficits or the need for further testing.

Predictions based on genetics

One popular method for predicting height, called the Khamis-Roche method, is calculated based on the child's height and the height of both biological parents (without factoring in skeletal age, which previously had been the standard). The calculation also takes into account the child's current weight and is generally considered by pediatric doctors to be a good method for predicting future height for some children who have unusual stature or maturity for their age.

Many websites and parenting books claim that this method is 90% accurate at determining the future height of kids. Unfortunately, as popular as this method is, its accuracy is limited to white American kids with no known health conditions that could potentially impact their growth.

Keep in mind, though, that even kids who have average-height or tall parents may inexplicably stop growing, thanks to a condition known as idiopathic short stature (ISS). These children are significantly shorter than 99% of their peers and will remain small as adults.

"Boys [with this condition] generally won't grow to be more than 5'4", while the girls might hit 4'11"," says Elizabeth Littlejohn, M.D., a pediatric endocrinologist at the University of Chicago Comer Children's Hospital. Late bloomers, on the other hand, are small for their age but still growing at a healthy rate and will eventually have a growth spurt and catch up to their peers.

Factors That Can Affect Height

Genes have the biggest influence on a child's adult height. In fact, according to the National Institutes of Health (NIH), experts believe that around 80% of a person's height is determined by their DNA.

Beyond genetics, there are other factors like overall health that can impact height—and many more that don't. For example, some persistent myths maintain that high-impact sports can stunt growth in kids, but science has yet to prove this to be true.

Here are four things that might affect your child's stature in the future.

"Without a good diet, kids won't grow normally," says Jo Anne Hattner, R.D., a pediatric specialist at the American Dietetic Association. Before your child begins solids, work with your pediatrician or a lactation consultant to ensure your baby is getting the right amount of breast milk or formula their body's needs. After your child transitions to solids, focus on making sure your little one consumes nutrient-dense calories from a variety of foods.

Common nutrition-related problems for babies and toddlers include incorrectly mixed infant formula and not getting enough calories when you're breastfeeding or weaning. Once you've introduced solids, ensure that beverages like milk and juice don't interfere with your child's appetite and take the place of nutritious foods.

What to Know About Feeding Your Baby the First Year

Some children are born with or develop serious medical conditions that can stunt growth if not treated. The most common are gastrointestinal disorders such as celiac disease, food allergies, thyroid problems, hormone deficiency, certain chromosomal abnormalities, and heart, kidney, or liver ailments.

Medications prescribed to treat common childhood conditions should also be monitored closely. For instance, Ritalin (methylphenidate) and other stimulants prescribed for attention-deficit/hyperactivity disorder (ADHD) have been found to affect growth. The problem is often dose-related and is usually easily fixed, says Barry B. Bercu, M.D., head of endocrine, diabetes, and metabolism at All Children's Hospital in St. Petersburg, Florida.

Make sure your child snoozes each night soundly. About 70% to 80% of growth hormone is secreted during sleep, says Paul Saenger, M.D., a pediatric endocrinologist at Children's Hospital at Montefiore Medical Center in New York City.

Kids reach their full growth potential when they're in a loving, nurturing, and supportive family environment, says Thomas Moshang, M.D., director of the growth center at Children's Hospital of Philadelphia. Emotional neglect and excessive tension or anxiety can interfere with growth. The condition—called "psycho-social growth failure" by doctors—is extremely rare, but its consequences are as real as malnutrition. 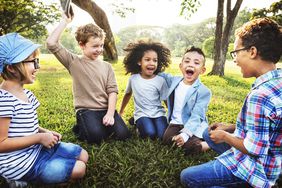 4 Reasons Your Child Should Visit an Endocrinologist