Every one-year-old develops at a different pace. Here's what you need to know about 12 month baby milestones.

Don't expect an overnight transition as your baby approaches his first birthday. "Twelve months of age may have the marker of a year, but development does not happen in a proportionate, direct manner. If it were plotted out on a chart, the line would look more like a jagged edge with peaks and valleys. It's a continuum," says Beth K. Ryan, M.Ed., a senior child life specialist at the Ann & Robert H. Lurie Children's Hospital of Chicago.

What to Expect in the 12th Month

"A lot of people think that babies should be walking by one year, but many, many babies don't walk until they're 14 or 15 months—sometimes even later," says Donna Eshelman, a movement specialist and founder of Stellar Caterpillar, a Los Angeles-based business that helps babies reach their gross motor milestones in the first year. Between 11 and 14 months is typical for the first independent step, she says.

As your baby gets closer to walking independently, he might take a few steps to the side and turn a little bit while cruising, Eshelman says. He might also get braver. "You'll see them standing and letting go of the chair," Eshelman says. "Just learning to balance without holding on is a very big deal. That's a development that happens after learning to stand."

Regardless of how your baby is getting from place to place, those little hands are probably busy. "Babies are so excited at this age. They're probably pointing, waving bye-bye, and beginning to imitate activities like holding a book," Ryan says. Babies this age might also build with stacking toys, sort basic shapes, and imitate animal sounds, she adds.

Eshelman suggests sitting with a hand puppet at the end of a coffee table to tempt Baby to walk toward you. But she advises against holding a baby's hands to practice walking until he takes his first steps on his own. "If parents have to guide the baby, the baby probably doesn't have quite the right balance and strength yet," she says.

In the meantime, a child who is content to crawl is still developing key skills that will come in handy later. "When they learn to walk, they're going to fall," Eshelman says. "But if they have those earlier patterns really strong in their nervous system, like crawling and rolling, they'll fall into the crawling position. They're automatically protecting themselves."

Create an environment that's safe yet rich, Ryan says. Twelve-month-old babies are often fascinated by household objects, and pots, pans, wooden spoons, and plastic food storage containers can all provide endless entertainment. Another way to encourage fine motor skills is to turn a clear water bottle into a piggy bank with fabric over the top, and then encourage the baby to drop in pennies or other small objects (under careful supervision, to prevent choking). Putting O-shaped cereal into the compartments of an ice cube tray can also be fun practice, Eshelman suggests. 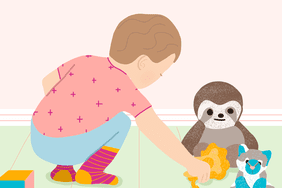 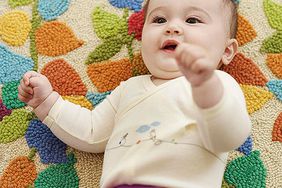 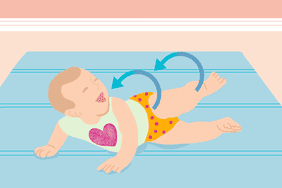 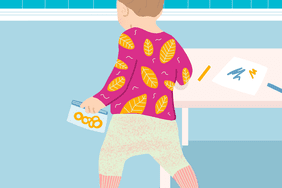 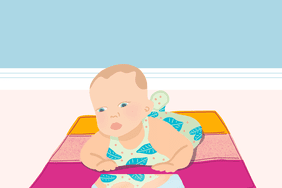