Here's how one mom learned to discipline her infant.

The Birth of Discipline

Whenever my 1-year-old, Luke, is near rocks, he shovels them into his mouth. And when he sees our cat, he likes to lunge, even though the cat likes to swipe and hiss.

Setting limits, reinforcing good behavior, and discouraging less-desirable behavior can start when your child is a baby. "There are things that even infants have to learn not to do, like pulling your hair," says Judith Myers-Walls, PhD, associate professor of child development and family studies at Purdue University. Of course, babies are somewhat limited when it comes to language comprehension, memory, and attention spans, so it's best to focus on damage control rather than trying to teach an actual lesson.

Distracting (helping him move from a not-so-good activity to something better) and ignoring (just what the name implies) are two very effective strategies. If, for example, your 4-month-old discovers how much fun it is to yank your hair, gently take his hand, give it a kiss, and redirect it toward something more baby-friendly, like a rattle.

In other instances, ignoring will do the trick. Of course, you never want to ignore a behavior that could be dangerous, but it's smart to simply look the other way when your 7-month-old cheerfully pelts his 59th Cheerio from his high chair. Very young children are utterly guileless; your cereal pitcher isn't trying to annoy you. He's learning the important concept of cause and effect. Sure, these behaviors can be frustrating, but your best bet is to stay calm and carry on with what you were doing.

When your baby starts to crawl, around the 8-month mark, it's time to think about setting limits. Suddenly everything, from cords to toilet paper, is a big no-no. A child this age only wants to explore (she has no concept of what she should or shouldn't do), so if you don't want her to touch something, put it out of her reach and let safer items take center stage. This is the best way to keep her from doing something she shouldn't.

Of course, many of us merely say no when we catch our kids getting into mischief. Your child knows by the tone of your voice that "no" means something different from "I love you," but she doesn't understand the real meaning of the word. Use other techniques, such as distracting her, to reinforce the lesson that some things are off-limits.

Around this age, your child's communication skills are coming along, so you can start explaining basic rules (like don't pull kitty's tail) and begin using the word "no," but only in serious situations. Cristina Soto, of New York City, learned early on that if kids hear "no" too often, they begin to tune it out. "Every time my daughter Sonia got near an outlet, I'd say 'Aah aaah!'" says Soto. "After a while, she'd cruise over to an outlet and say, 'Aah aaah!' to me."

Your child's physical skills are coming into play too. When your tot begins walking, he'll be thrilled with his newfound independence -- and frustrated that he can't do all the things he wants to. Enter the age of tantrums. Yes, they're annoying, especially when all of Wal-Mart is staring at you, but they're a part of growing up and not a cue for harsh discipline, such as taking away a privilege. Some kids calm down through distraction; others need a hug. But if a tantrum is lengthy, remove your child from the situation until he's calm, explaining, "We can't stay in the store if you're screaming."

Hitting and biting are two more joyful side effects of your toddler's inability to effectively communicate. If this sounds familiar, tell your child what not to do and redirect him toward a more appropriate activity. If your child hits you because you've interrupted his play for a diaper change, say, "We don't hit, it hurts," and give him a toy he can play with while you change him.

The 2-year-old mark ushers in playdates and preschool, which are great for your child's social skills -- and for honing your disciplining techniques. Sharing is hard at this age.

Toddlers understand simple commands, empathy, and cause and effect, so you can use these to help you discipline. If your child grabs a crayon from her friend, for example, you can say, "We don't grab, and taking Billy's crayon isn't nice." Then give her a similar crayon to play with.

Susan Simmons, of South Riding, Virginia, has found that keeping commands short is key. "I used to give my 2-year-old daughter, Mia, long explanations for why she couldn't do something. Then I realized she didn't get it. Now when she wants an ice pop before dinner, I just say, 'You can't have one now.'"

Of course, no single discipline method works all the time. But the more practice you get doling it out, the more your child will begin to understand boundaries, and the happier everyone will be.

Kathryn Perrotti Leavitt is a freelance writer in Boulder, Colorado. 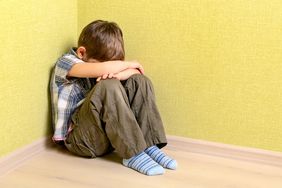 When Should You Start Disciplining?