Learn everything you need to know about your 10 month old baby. Track important developments and milestones such as talking, walking, growth, memory & more.

Your baby has always been a bit of a scientist, eager to discover how the world around him works. Now at 10 months, his physical skills are catching up with his desire to experiment. He has the hand-eye coordination to put blocks into a bin, then dump them out again, or to stack a few multi-color rings on a post. He can pick up a ball and might even make an attempt to toss it, or he can use his pincer grasp and impressive visual acumen to grab and examine a minuscule crumb. Now that he's able to get himself where he wants to go, either by crawling, cruising, or walking, he can check out almost anything he wants to—such as the pots and pans in the kitchen cupboards or the bottles under the sink. As long as you've babyproofed, make your best effort to let him have the run of the house. Feeling, tasting, and dumping out what he's collected are how he discovers important scientific principles, such as the power of gravity. He'll also learn by watching and imitating you. In what could be seen as some of the first signs of pretend play, he'll pick up a cloth and try to dust the furniture, or hold a phone to his ear and gab into it. You might be amazed by just how many details he's noticed about your life.

Just as he imitates what you do, he might also start to imitate how you communicate, blurting out exclamations like "Uh-oh!" or shaking his head no, for instance. If you haven't heard his first word already, you probably will within the next few months. Prep for it by talking directly to your baby, naming the things that interest him, and using his name in conversation—it'll keep his attention.

You're used to watching your baby outgrow outfits—those infant clothes were stowed away long ago—but now he's too big for a lot of his baby gear. If your little one's sitting up on his own, you should pack up the bouncy seat, if you haven't already. Your baby's probably outgrown his swing, too. Most are designed for babies up to 25 or 30 pounds, but if he's really active—and most 10-month-olds are—he's strong enough to flip or tip the swing with his wiggling. Just not sure? Check the instructions or ask your pediatrician. But to be on the safe side, drop your little one in a portable crib or a stationary exer-saucer if you need to leave him alone for a few minutes.

Your baby's also getting too old for his bottle. Pediatricians recommend transitioning entirely to sippy cups shortly after the first birthday, but if your baby's attached to his ba-ba, it's a good idea to start working on the switch now. Pacifiers should face a similar fate, since sucking on a pacifier after the first year has the potential to harm tooth growth, and simply having something in his mouth 24/7 can keep your baby from testing out his first words. While you might not be able to wean your baby off pacifiers entirely, you can set limits on how often he can suck on them—say, at naptime and bedtime only. (Bonus: They'll make your reluctant sleeper slightly more eager to hit the crib.)

Just as your baby outgrows his old gear, he's ready for some new things: clothes that can stand up to the constant crawling, shoes to fit his walking feet, a toddler-size grocery cart to push around. Supplying a baby with the clothes, toys, diapers, food, and other stuff he needs, even just in the first year of life, can be cost-prohibitive. The good news: As your baby gets older, some expenses will decrease. Child care for an infant under 12 months is usually more expensive than it is for a toddler, so as your baby nears the year mark, ask about any potential savings. If you've been feeding your little one formula, at age 1 you'll be able to switch to whole milk, at considerable savings. And soon you'll be able to stop stocking up on tiny jars of pricey baby food and feed him the same table food that you and your husband are eating. Consider these other cash-saving tips: 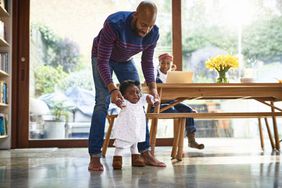 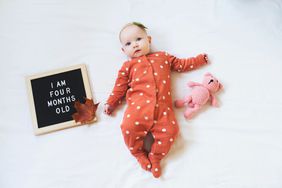