How to Establish a Routine for Your Baby

From sleeping to feeding, creating a routine for your baby's days will make life easier for both of you. Here's a cheatsheet on how to do it.

For the first few months, infants aren’t ready for a schedule, but you can use this time to prep for future success. First, teach your baby the difference between day and night. She may have these times reversed because she was lulled to sleep by your movement while in the womb. During the day, wake her to feed every three hours, and talk and sing a lot.

Depending on her weight, you may also need to get your baby up to eat every four hours throughout the night. During those feedings, encourage a quick return to dreamland by being quiet and keeping the lights dim.

When your baby is 4 to 6 months old, you’ll probably get the approval from your doc to establish a more regular sleep routine. Your little one will likely be taking three naps a day, ranging in length from 30 minutes to two hours. The morning nap could start about two hours after your baby wakes for the day, and the first afternoon snooze should begin around four hours after the a.m. one starts. The optional third nap could be about two hours after waking from the second.

These intervals are just suggestions; it’s more important to watch for when your baby rubs his eyes, becomes fussy, or loses interest in toys. At the first sign of fatigue, begin a consistent presleep routine: Sing his favorite song and sit with him in the same chair. The ideal bedtime is one that’s 12 hours after the morning wake-up, but if he didn’t nap well, he might need to turn in earlier than that.

As babies grow, they can go longer between meals. Remember that fussiness doesn’t necessarily mean hunger. If your baby’s acting like she’s hungry during the day but it’s not time for a meal, first rule out other things, such as a dirty diaper. To set a schedule, talk to your pediatrician about how often and how much to feed. Plan out nursing or bottle sessions based on her wake-up times and the hours between them. Also keep in mind that when you begin to eliminate night feedings, you may need to increase the volume at daytime meals.

Sources: Lisa M. Asta, M.D., a spokesperson for the American Academy of Pediatrics; Hannah Chow, M.D., co–medical director of the Loyola Center for Health at North Riverside, in Illinois; Jena Liddy, M.D., a pediatrician at Boulevard Pediatrics, in Encino, California.

Updated by Jeanine Detz
Was this page helpful?
Thanks for your feedback!
Tell us why!
Related Articles 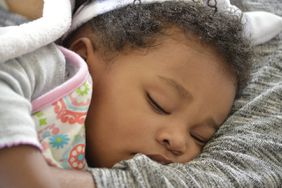 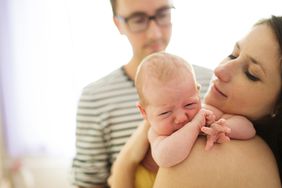