GERD, short for gastroesophageal reflux disease, is a condition that often goes undiagnosed in babies. About one baby in 20 suffers from GERD, but it's often mistaken for colic.

In fact, an equal number of babies experience problem reflux that requires treatment but is not classified as a disease. This condition, known simply as gastroesophageal reflux (GER), can be even trickier to diagnose because its symptoms are less severe. Untreated, both GER and GERD can cause complications such as respiratory problems. But with behavior modification and medicine, if needed, reflux can be managed until your child outgrows the condition -- often by 1 year of age.

As part of normal digestion, most people, regardless of age, experience some degree of reflux. A wet burp or a burn in the chest is reflux at work. Reflux happens when digested food, churning in stomach acid, flows back up into the esophagus. This broken-down food and acid can create a painful burning sensation known as heartburn. If there's enough force behind it, it comes out as spit-up or even vomit. Either way, to an unsuspecting baby, it's a good reason to cry.

In fact, all babies reflux, or spit up. Infants spit up after feedings because the lower esophageal sphincter muscle, which serves as a trapdoor between the esophagus and the stomach, is weak in babies, allowing food to slosh back up the pipe more easily. It doesn't help matters that infants eat an exclusively liquid diet and spend most of their time lying down, making it easier for food to splash back up. In time, the sphincter muscle, like all muscles in a newborn's body, will mature, and the spitting up will subside.

For some babies, spit-up means more than just a few wet spots on Mommy's shirt. A young child with a bad case of reflux will spit up or throw up more often than is usual, may choke or gag, may arch away from the bottle or nipple, and may be irritable during and after feedings. These babies aren't able to say, "Mom, my chest is burning" or "Dad, it's painful for me to eat," so some experts believe reflux may cause them to cry all the time to communicate their distress. However, this is hard to prove.

Usually, for a baby to be diagnosed with reflux disease (GERD), he'll have developed serious complications. Failure to gain as much weight as expected is a hallmark symptom of GERD, says Melvin Heyman, MD, a member of the American Academy of Pediatrics' committee on gastrology and nutrition. Other red flags are the presence of esophagitis (an inflammation in the esophagus that can result in blood in the spit-up) and respiratory or pulmonary problems, such as coughing, wheezing, asthma, or recurring pneumonia, caused by stomach contents that enter the nose, windpipe, or lungs.

Fortunately, these complications are rare. In fact, the vast majority of babies with reflux that requires treatment exhibit milder -- though often equally painful -- symptoms, and are classified as having GER. According to Bryan Vartabedian, MD, a pediatric gastroenterologist in Houston, the majority of patients he sees that show signs of GER are what he calls "gray zone" babies -- ones who suffer from feeding difficulty, mild breathing problems, and profound irritability, but are otherwise growing and thriving well.

Other symptoms that signal problem reflux include disorganized feeding (when a baby can't get into a rhythm while nursing or bottlefeeding), nasal congestion, and frequent hiccups.

Some babies with GERD are inaccurately diagnosed with colic, which the American Academy of Pediatrics defines as periods of crying in an otherwise healthy infant for more than three hours a day, more than three days a week, for longer than three weeks. It runs its course by the time a baby is 3 to 4 months old. No one knows what causes colic, but the most widely held theory is that the baby's immature nervous system can't handle all the sights, sounds, and stimulation of life outside the womb; the prolonged periods of crying are her only way of communicating this feeling and coping.

However, some experts believe there is no such thing as colic -- and that the nonstop crying is instead caused by something painful and medically explainable, such as GERD. William Sears, MD, the author of numerous books on childcare, says that in his practice, he assumes that babies with colic symptoms have GERD until it is proven otherwise.

Other doctors think colic does exist, but agree that it's overdiagnosed. So what do you do if your pediatrician believes your child has colic and you're not so sure? Beth Anderson, executive director of the Pediatric/Adolescent Gastroesophageal Reflux Association, a national support group for parents, advises you to use your common sense; If you suspect GERD, chart your baby's crying in duration and intensity, as well as any other symptoms that cause you concern, and share this information with the doctor. You can also try taking someone with you who has witnessed your child's extreme crying and spitting up or refusing food. If all else fails, switch doctors. A mother's instinct is usually right, says Anderson.

If left untreated, GERD can eventually lead to growth problems, narrowing or closure of the esophagus, chronic pneumonia, Barrett's esophagus (a precancerous condition), and apnea (a tendency to stop breathing during sleep). It's hard for doctors to diagnose GER and GERD at the first visit, because a baby's strongest mechanism for communicating discomfort is crying, and an irritable child could be the result of any number of conditions.

If a doctor suspects that your baby might have GER or GERD, the first thing he will do is start slight lifestyle modifications. Typical first steps include elevating your baby's head during sleep, keeping her upright for meals and for 30 minutes afterward, and thickening breast milk or formula by adding rice cereal.

If these techniques fail, your doctor may recommend medication. Acid reducers such as Zantac keep acid from reaching the esophagus and are often prescribed first. Acid reducers have no known side effects and are safe for children. But if they fail to control the symptoms, more aggressive medications -- proton pump inhibitors (PPIs) such as Prilosec and Prevacid -- may be prescribed to actually stop the production of acid altogether. While these medications may be necessary for more serious GERD, PPIs can cause a wide range of side effects that should be discussed thoroughly with your pediatrician. In severe cases of reflux, surgery to repair the esophageal sphincter muscle may also be an option.

So will your baby outgrow GERD? Yes and no. Over the course of the first year, the esophageal sphincter muscle firms up, and your baby will begin eating heavier foods and sitting completely upright to eat -- all of which help chronic reflux subside. However, babies with reflux often grow up to be people with weak stomachs and stomach problems. Some babies can get off medication like Zantac by 1 year -- others will need to take it into adulthood.

The most important things you can do are ask questions and be persistent when you're talking to your baby's pediatrician. Remember, you're your child's best advocate. 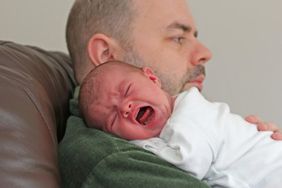