Babies can cry as much as two to three hours (or more) in a 24-hour period, and living with the wailing isn't easy. Try these strategies to calm both of you.

My son George was a screamer. Unlike his go-with-the-flow older sister, he cried for what seemed like the first six months of his life. He screamed when he was hungry, when he was wet, when he was tired, and when he was bored.

He would change from a sweet cherub to a hot mess in seconds. His face would turn red, and he'd arch his back and flail his arms. I tried my best to soothe him with nursing, diaper changes, and hugs. But when those didn't work, I'd end up in tears, too. Thoughts such as, "What's wrong with my baby?" were soon replaced with, "What's wrong with me?" I felt totally overwhelmed and, worse, like I was failing at a basic task of mothering—the ability to comfort my child.

"For new parents, figuring out what all the crying means can be challenging, frustrating, and even scary," says Rallie McAllister, M.D., a family physician in Lexington, Kentucky, and coauthor of The Mommy M.D. Guide to Your Baby's First Year. "If they aren't able to immediately pinpoint the reason for the crying, they get frightened that there is something physically wrong with the baby."

An inconsolable little one can also make a new parent feel powerless, notes Crystal Clancy of Eagan, Minnesota, a licensed marriage and family therapist specializing in perinatal mental health. She says this can be particularly distressful for parents who felt competent and in control in their pre-parent life.

The good news: You will get better at interpreting and responding to your baby's cries, says Dr. McAllister. Plus, some babies with colic cry, regardless of how skilled you are at caring for them and providing comfort. Until then, put these tricks to work.

Rock your munchkin in a carrier while repeatedly shooshing in their ear. "I put my fussy baby in a sling and bounced her all over the apartment, the block, the city," says Lili Zarghami of Brooklyn. "I cooked and cleaned while swinging her back and forth."

Why it works: "Studies suggest that a calming response is triggered in an infant's brain when being carried or rocked, causing the baby's heart rate to slow and the muscles to become more relaxed," says Kristie Rivers, M.D., a pediatrician in Fort Lauderdale. At the same time, the shooshing sound creates a repetitive distraction that your baby may focus on instead of crying.

2. Turn Up the Tunes

You needn't limit yourself to lullabies. Try all different genres and songs, including what you like. "Vivien used to chill out to "Forget You," by CeeLo," says Jennifer Rainey Marquez of Atlanta. Reggae was a favorite choice for Brooklyn mom Lindsay Reinhardt's son. And Melanie Pleva, of Springfield, New Jersey, had a baby with a penchant for "Iron Man" by Black Sabbath. "He would giggle as soon as he heard it begin to play," says Pleva.

Why it works: Like movement, music can calm the nervous system, decreasing a baby's heart and respiratory rate. And don't underestimate the power of your voice—even if you're no Taylor Swift. "Infants may be especially soothed by the sound of their mom singing because her voice is familiar and the rhythm is calming," says Dr. Rivers.

"When my sons were babies, I would record them fussing and crying on my phone and let them listen to it. They were fascinated by the sound of a crying baby," says Jillian St. Charles of West Knoxville, Tennessee.

Why it works: "Babies sometimes get so distressed, they have a difficult time calming down, even when the offending agent, such as a dirty diaper, gets taken care of," notes Dr. Rivers. They literally get "stuck" crying. But a surprising distraction, like a recording of their own voice, can jolt babies out of what is making them upset. "Babies are so interested in the world around them that simply introducing something new can help break that cycle of crying," she notes.

When Polly Blitzer Wolkstein's twins would get overstimulated, she found that putting them in a completely dark room was the most effective way to soothe them. "I'd pull down blackout shades and put them in their swings with a pacifier. The swings gave them the sensation of rocking in our arms, and they'd be out like a light in about two minutes," says the New York City mom.

Why it works: Babies can easily become overstimulated by all the noise and lights of everyday life. "After all, newborns are used to the quiet, dark confines of the womb," says Dr. Rivers. Blocking out all that stimulation can calm them down.

Another trick that parents swear by is: Turn on white noise. Try a fan or vacuum cleaner, use a white-noise machine, or download an app.

Why it works: The theory is that these sounds imitate what an infant heard in the womb as their parent's blood passed through the placenta, says Dr. Rivers. White noise also masks other sounds, such as siblings playing or dishes banging. Just keep the volume low. According to the National Institutes of Health, research shows that white-noise machines could contribute to hearing loss if they're too loud and too close to a baby for long periods.

Jessica White, of Smyrna, Georgia, swears that her fussy baby could sense when she was getting stressed. "That's when I knew it was time to hand her off to my husband or Grandma," says the mother of two. If she couldn't change caregivers, White would at least move to a different environment. "Going from the nursery to the patio or kitchen was sometimes enough to snap her out of the crying spell," she says.

Why it works: "A new location to focus on may be all a baby needs to change her mood," says Dr. Rivers.

7. Work Out the Stress

Kate Motz, a mother of three in Sunnyvale, California, would plan to exercise in the evening. "As soon as my husband walked in the door, I'd hand him the baby and head to spin class to clear my head," says Motz.

Why it works: Exercising releases endorphins, feel-good hormones that can improve your mood. It also takes your mind off your munchkin for a while so you can focus on your own body, which can give you back a sense of control, says Dr. Rivers. And the "alone time" may de-stress you enough to head back into the fray and have more stamina to manage the crying calmly.

What Is Postpartum Anxiety?

When Jeannie Kim, of New York City, was on maternity leave with her daughter, her husband had a job that required him to be gone from 5 a.m. to as late as midnight. "I took four walks in one day just to stay sane," she says. "And the long strolls almost always calmed the baby down, too."

Why it works: Many new parents worry that people will be annoyed by hearing a crying baby in public, but it's better for you to get outside and get some fresh air. Even if the baby continues to cry, it may cause less stress outdoors than when you're cooped up in the house.

Samantha Jacobs treated herself to a pair of noise-canceling headphones. "Everyone talks about using music to soothe the baby, but sometimes I need music to soothe myself," says the Fort Lauderdale mom. "If the crying gets really bad and I'm on my own, I'll place my daughter in her crib, then go and close myself in my room. I'll play just one song that I know will relax me and give me the patience I need," she explains. "Then I will go back and try to calm her down."

Why it works: Shutting out the crying for a few minutes can stop your head from spinning and your heart from racing. And you help you recharge so you can better handle continued crying.

For Some Parents, Writing Is the Best Self-Care

If your baby cries around the same time every day, have something to look forward to while you tend to them. Boston mom Katie Bugbee would DVR her favorite TV show and watch it every morning while trying to calm her son during his fussy time.

Why it works: Laughter is helpful for anyone who's reeling from uncomfortable emotions. (Hear that, new parents? Get comic relief as much as you can!) "It gets you out of your head and away from feelings that are making you depressed or anxious," Clancy says.

Jana Davis, of Norfolk, Virginia, a therapist and a new mom, found that it wasn't just the baby crying that was unnerving. "It's the lack of sleep, the rapid hormone changes, and the new role as a mother as well," she says. In addition to asking for help from her mom and best friend, Davis used a breathing technique: She'd sit with her eyes closed and both hands over her tummy, then breathe slowly and deeply, feeling her hands rise and fall on her abdomen.

Why it works: This type of breathing promotes relaxation, and it helped Davis realize that she could control her feelings instead of letting them get the best of her. 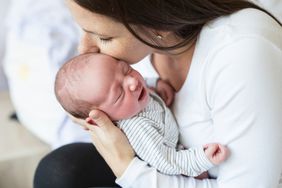