Appealing to your cherub's sight, sound, taste, smell and touch can soothe your baby in the womb—and stop crying once she's a newborn.

Your baby spent 40 weeks in a quiet, warm, dark womb, and suddenly emerges in a loud, bright, open world. (The guy with the camera! The lights! The booming voices!) Talk about a trippy transition. From her first day on Earth, your newborn is full-out using the senses that she developed in utero. The overwhelming onslaught of sights and sounds is more than enough to warrant some crying from your little blueberry.

However, researchers have found that by engaging baby's senses effectively during her first few months, you can bring her back to that mellow state of mind she enjoyed while cocooned in your tummy—and, in turn, instantly stop the waterworks.

"It's an adjustment for an infant to get used to being outside the womb," says Lise Eliot, Ph.D., associate professor of neuroscience at Chicago Medical School and author of What's Going on in There?: How the Brain and Mind Develop in the First Five Years of Life. "But babies adapt pretty quickly, especially when they experience sensations they've already been exposed to while in Mom's belly."

Ready for the keys to quieting your baby's crying? Read on.

Massage your belly before birth. It can help the baby become accustomed to mother's touch—and it lays the groundwork as a pacifying tactic post-birth, says Michelle Bennett, M.D., a pediatrician in Lexington, KY. In the first trimester, Baby can recognize sensations on the lips and nose, and later, she'll be able to pick up on your movements (and warm body temperature). Your pea in the pod feels safe and secure in the cozy living quarters of your uterus and the motion of you going about your day is soothing. By the third trimester, the baby will also be able to feel your touch when you're stroking your stomach.

Bennett recommends starting to massage your belly in the second trimester when you're relaxed, such as while you're doing yoga. Soft, circular rubs on the belly do the trick.

Hold and cuddle your baby skin to skin. When your babe's on a bawling bender, pull her close. "Everything we know suggests that newborns want not just close confinement but also human touch," Eliot says. Skin-to-skin contact (also known as kangaroo care) is even better than your average cuddling. Experts theorize that being pressed flush against Mom's flesh and hearing her heartbeat feels most like being in the womb, and keeping her close to you recreates the movements and warmth she felt while tucked in your belly. Newborns that share bare-chested snuggles with their moms breathe better and cry less, according to a study from Vanderbilt University.

Treat her to a massage. Give your infant a rub each time you lay her down to rest. You don't need to go full-on, knuckle-cracking masseuse here. Be gentle and responsive to Baby's pleasure or discomfort. Here's one method: Place your infant on her tummy. Gently stroke her shoulders, back, arms and legs for about 1 minute each. Then place her on her back and spend about 1 minute extending and flexing her arms and legs. "This improves your little one's muscle tone and helps pacify her," adds Weadock. A win-win!

Kangaroo Care May Have Longer Benefits Than Previously Thought

Nosh wisely. By the second trimester, your baby will start to taste the amniotic fluid that surrounds him. Exactly what he tastes is partly up to you.

"We know that what mom eats—fruits, vegetables and spices like garlic, onion and vanilla—affects the flavors of the amniotic fluid and breast milk," says Julie Mennella, Ph.D., a biopsychologist at Monell Chemical Sciences Center at the University of Chicago. There's even a name for this: prenatal flavor learning. This means that postdelivery, Baby will find comfort in the familiar flavors Mom noshed on while pregnant. Naturally, newborns are hardwired to crave breast milk, which tastes appealingly sweet.

Eat many of the same foods you did while pregnant. Breast milk is your cutie's comfort food while he's transitioning to life outside your belly.

"Breastfed babies are at an advantage because they continue to get familiar flavors through Mom's milk," says Mennella. While your baby is nursing, try to keep a similar diet to when you were pregnant. In other words, now's not the time to go on an out-of-left-field Ethiopian food kick.

Not breastfeeding? Not a problem. You can also try a vanilla-scented pacifier when your baby needs help calming down (the Avent Soothie Pacifier in Vanilla Scent is a delightful option). See, just like you, baby has a sweet tooth—and evidence suggests he even had it in utero.

"In the womb, when sweet substances are introduced through a mom's diet, her baby will swallow more amniotic fluid," says Ashanti W. Woods, M.D., a pediatrician at Mercy Medical Center in Baltimore. A sugary-smelling pacifier can play to his yen for sweets, easing him through a particularly fussy moment. But don't worry, after Baby's chilled our and no longer red as a beet, you can whip out the nutritious, pureed veggies again.

Nursing 101: All About Breastfeeding

Play baby a lullaby. By about 18 weeks pregnant, your baby can hear; around 36 weeks she's actively listening. What is she picking up? Aside from all the background noise of your heart, stomach and intestines, mostly you.

"She likely hears a garbled version of Mom's voice even more prominently than Mom's thumping heart," Weadock says. She also hearts what you hear—such as your partner talking or the latest Lorde jam. In fact, during the third trimester, you may feel her shifting in response to external sounds—babies wiggled around more when they could hear a lullaby playing, according to a study in Developmental Science.

Talk, sing and read to your baby. Your familiar voice, like your smell and your touch, is a huge consolation to your infant. Also, perhaps because of all the gurgling they hear in your belly, babies tend to be soothed by white noise like fans, vacuum cleaners or recordings of rainfall. You can also download zen sounds, such as a heartbeat or mellow song, to add to your bag of settling-down tricks.

Keep the volume low. If Peewee is moody, turn everything down a notch—literally. "Even though a baby's auditory perception is less sensitive than yours, her inner ear is still quite vulnerable to loud sounds," Eliot says. Nix blaring noises and places (no sneaking your sweetie into the Cineplex) in the first few months of life, and avoid yelling and being around other ear-splitting chatterboxes.

Pick a favorite scent for baby to get to know. A baby's nose develops by 15 weeks, and by the third trimester, she'll sniff aromas she could remember later. According to a study by the European Center for Taste Science, babies of moms who ate cookies laced with licoricey anise while pregnant were attracted to the scent once born.

After birth, a baby seeks out familiar fragrances to find comfort. Eau de Mom. "Newborns can recognize mothers by their odor within hours after birth," Mennella says. "Mom's scent is very calming for the baby."

Keep familiar smells around at birth. Baby is born covered in a white cheese-like substance called the vernix. It smells similar to the womb and you can use this scent to your advantage. "Don't allow too much of the baby's vernix to be wiped off," says Bennett. The odor is familiar to her and will add calm after a bumpy ride into the world.

Don't mask your scent. In the weeks following birth, reach for standby perfume and deodorant. "Just stick with what Baby is familiar with," Eliot says. Stepping out? When you leave your baby with a sitter, give her a piece of clothing with your signature smell to console her. "This has been shown to help the baby breathe better and calm down," Woods says.

Prepare to stare. A baby's eyes are closed until you're about 26 weeks pregnant. It's obviously dark in the womb, but when he does open his lids, enough natural light seeps in during the final two months for him to see his hands and leg movements, research published in Developmental Psychobiology shows. At that point, Baby will turn toward a light source shone on your abdomen. When he makes his big debut in the world, he won't be able to see much, but what he can focus on is a strong source of delight: You. Babies have a preprogrammed desire to look into your face.

Brighten up his nursery. A fussy infant may simply be in need of stimulation. That's where bold patterns and colors come in. "Babies can basically only see really bright colors," Eliot says, so neutral, pastel-colored objects are lost on your bundle, who can't discriminate among the soft hues. A blanket, toy or mobile with interesting patterns in punchy colors, like yellow, red and orange, can capture a young infant's attention and help wind down his whimpers, she adds.

Make eye contact. Your pacing, singing and pulling out every trick in the book to calm Mr. Fusspants. Here's an idea: Stop everything and look into his big, bright eyes. Baby arrives with an ability to focus on your face while feeding—a big boon to bonding—though his vision is blurry beyond 8 to 10 inches for the first few months. Multitasking is part of being a mama, but when your munchkin is fussing, break from the whirl of mixing bottles, throwing in laundry and prepping dinner for some eye contact. Connecting is calming.

10 Things to Know About Newborns
Was this page helpful?
Thanks for your feedback!
Tell us why!
Related Articles 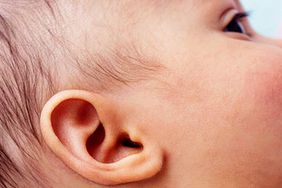 The World According to Babies 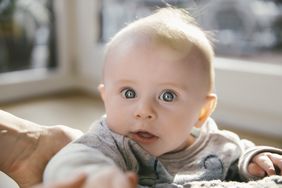 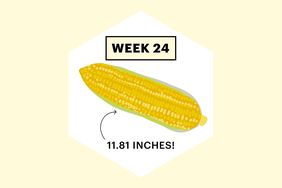 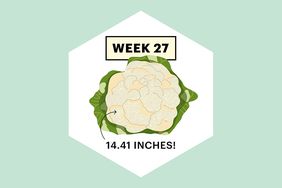 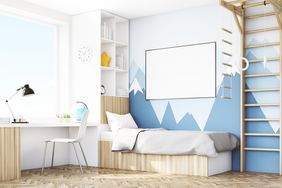 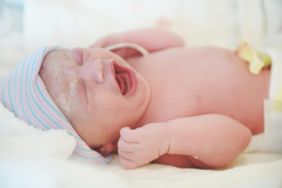