When you have a child, it seems like everyone knows what's best for you and your baby. That's right, the moment you announce your new arrival, you'll become the recipient of a slew of unsolicited advice. But much of yesterday's "wisdom" has proven untrue. Read on for 15 outdated pieces of parenting advice.

Infants Need to Be Bathed Everyday

Babies don't get stinky from sweat the way adults do, so they only need a bath every two or three days (except following a major diaper explosion!). If it's part of your wind-down routine, a daily bath is perfectly OK, too—just moisturize afterwards.

Babies Sleep Best in a Room That's Silent and Dark

While some children really are light sleepers, most do fine with background noise and a little light. Plus, if your little one gets used to activity while they're sleeping, they might be more willing to snooze in a variety of situations.

Your child won't become bowlegged standing or bouncing on you; that's just an old wives' tale. Moreover, young babies are learning how to bear weight on their legs and find their center of gravity, so letting your child stand or bounce is both fun and developmentally stimulating for them.

Listening to Classical Music Will Raise Your Baby's IQ

While music can enrich a little one's life, no conclusive research has found that having a baby listen to classical music in particular can result in significant brain-boosting benefits.

If You Pick Your Baby up Whenever They're Crying, You'll Spoil Them

Babies under 4 months of age have few self-soothing strategies; they know how to suck to soothe and like being swaddled, but that's about it. Picking infants up when they cry helps them learn that parents will always be there to take care of them.

Urine is sterile, and today's diapers are so highly absorbent that it's fine to leave a baby in a wet diaper overnight. However, if your baby has a poopy diaper and it appears to bother them, you should change it.

Never Apply Sunscreen to an Infant Under 6 Months of Age

While it is best to keep your little one away from dangerous UV rays, you can and should put sunscreen on your child if they'll be in the sun. Their risk of skin cancer is greater than their risk of having a reaction.

But how should you apply said sunscreen? According to the American Academy of Pediatrics (AAP), a minimalistic approach is best. "Use sunscreen on small areas of the body, such as the face [and hands], if protective clothing and shade are not available," the AAP writes. Choose coverage, however, whenever possible. "Find shade under a tree, an umbrella, or the stroller canopy."

Yes, you need to sterilize bottles and nipples when you first take them out of the package, but after that, washing with soap and water is fine. (You can also run them through the dishwasher on a sanitize setting if you'd like!) Babies are exposed to many more germs than those that remain on a well-scrubbed bottle or nipple.

The safest sleep position for a baby is on its back. In the past, doctors worried that babies might choke on any spit-up if they weren't lying on their tummy or side, but studies ultimately linked these positions to higher rates of SIDS.

Putting Rice Cereal in Your Infant's Bottle Will Help Them Sleep

Hold off on introducing solids until 4 to 6 months. Research suggests that babies who are given solids before 4 months are actually worse sleepers than their formula-fed counterparts—and studies have revealed a link between the early introduction of solids and obesity later in life.

It's Critical To Keep Your Baby on a Strict Feeding Schedule

While having a schedule may make sense, it's usually better to feed on demand, especially in the first two months. After that, you may begin to notice a rhythm of feedings every two or three hours. Early on, it's important to always look for hunger cues and fullness cue

Babies use their toes to grip the surfaces that they're walking on, so they should actually go shoeless indoors. To keep tiny tootsies safe outside, get a shoe with a good grip on the sole—hard-soled shoes can be too slippery.

Babies Need to Poop at Least Once a Day

Parents often think a baby is constipated when they're not, says Andrew Adesman, M.D., chief of developmental and behavioral pediatrics at Schneider Children's Hospital in New York. Newborns often have several bowel movements a day, but they may poop as little as every three to four days at about 2 months to 3 months of age, he says. If bowel movements are very hard and infrequent, or you see blood in the diaper, however, call your pediatrician.

Touching Your Baby's Soft Spot Can Hurt Their Brain

The fontanel, or soft spot, at the front of your baby's head is a skin-covered opening in the skull that pulsates, frightening some parents. "There's a presumption of vulnerability, but the brain is actually quite well protected," says Dr. Adesman. The front fontanel typically closes at about 1 year of age, while the smaller soft spot in the back of the head usually closes at 2 months to 3 months.

While your wee one may need some help regulating their internal temperature, cold weather will not make your child sick. Viruses and bacteria do that. 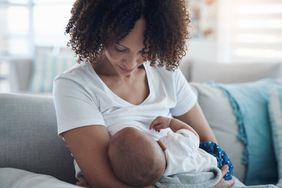