When Do Babies Hold Their Bottle?

Holding a bottle or sippy cup requires fine motor skills, strength, coordination, and cognitive development. Learn when most babies are up to the task of self-feeding.

While feeding your baby promotes bonding and portion control, it also takes up a lot of time. Some parents long for the day when their little one holds his own bottle, effectively feeding himself without assistance. In order to reach this milestone, though, he needs to develop fine motor skills, coordination, and strength. Keep reading to learn more about when babies can hold their own bottles and sippy cups.

When Do Babies Start Holding Their Own Bottle?

Because every baby develops at a different rate, there’s no predicting exactly when he’ll hold his own bottle. Some tots master the skill at 6 months, while others take 10 months or longer. That's because holding a bottle requires a wide range of skills: cognitive development, fine motor control, coordination, and strength in the core and upper body.

Your Step-by-Step Guide to Bottlefeeding

Some signs your baby may be ready to hold his own bottle: He can sit up by himself, which usually happens between 4 and 7 months, and he can grasp objects properly. He may also be up to the task if he reaches for his bottle during feedings.

Never leave the bottle propped in your little one’s mouth. She may overeat or choke on the steady stream of liquid. This practice can also lead to ear infections, according to the American Academy of Pediatrics (AAP). That said, here are some ways you can help your child hold her own bottle:

Once your baby starts holding his bottle, make sure to take the necessary safety precautions. Never leave your baby alone while feeding—especially in the crib. A bottle in bed may be soothing, but all that liquid pools in your little one's mouth once she's asleep, boosting the likelihood of tooth decay. Your little one can also choke if sipping from a bottle in her crib. Always monitor you child closely while he's eating, and listen to his feeding sounds. You'll probably be able to hear if something sounds wrong.

When Do Babies Hold Sippy Cups?

By the time your baby gets into a groove with her bottle, you can probably start thinking about breaking the bond. Most babies are ready to start drinking from a sippy cup between 6 and 9 months, according to the AAP. And by 12 months, it's best to boot the bottle altogether. One major reason: Once a baby starts walking, she's likely to carry her bottle around with her, whereas an infant fed by her parent will generally have the bottle removed right after feeding. If the bottle contains anything other than water, frequent sipping can lead to tooth decay.

Whether she's breastfed or bottle-fed, a baby who can sit up by herself and open her mouth for a spoon is ready to add a cup to her mealtime mix. First do a quick show-and-tell by holding the cup to her mouth and dribbling some liquid onto her lips; take the valve out of a non-spill cup in order to do this. If you're using a cup with handles, hold them so that your baby sees how to maneuver them herself. If she doesn't get the hang of it, try using a straw.

Some babies fare best with a slow-and-easy approach, so try replacing one regular bottle feeding with a sippy cup. Do this every few days until you're completely bottle-free. Sucking can be a way for babies to seek comfort, so offer a substitute lovey (say, a blankie or a stuffed animal) while he switches to cups.

What to Know About Feeding Your Baby the First Year 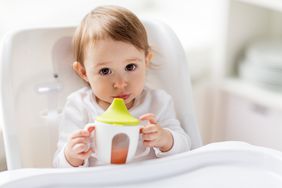 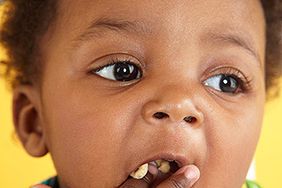