Oral thrush is very common, but did you know the fungal infection can also appear on the nipples? Here's everything you need to know about nipple thrush and how the condition affects nursing parents.

First-time breastfeeding parents are often warned that there is a breaking-in period when the nipples will crack and feel itchy or painful as the parent and baby settle into nursing. But sometimes that itching, pain, and cracked, flaking skin are symptoms of thrush from breastfeeding.

The first time my nipples bled my son was just a few days old. I assumed the cracking was normal. Hunter had a tongue tie, and my early scars were likely the result of a poor latch. But as the weeks went by, breastfeeding became even harder. My nipples hurt when my son was feeding and even when he was not. The fabric of my nursing bra felt like sandpaper grating against my skin. My nipples itched, terribly. There was more blood, and the act became excruciatingly painful. Every two hours, my son and I would cry.

I tried to ignore the pain and suck it up. I figured the discomfort was temporary and my nipples needed to callous and harden. But by week four, I had had enough. I was ready to wean my son, at least until I saw the white patches. Soft, fuzzy-looking spots appeared on his tongue and the insides of his cheek. Turns out it was thrush. He—well, we—had thrush.

Thrush can appear in different parts of the body, but oral thrush is common, particularly in babies under 6 months. The fungal infection (called candidiasis) is caused by an overgrowth of the Candida fungus and affects about 75% of people. Vaginal thrush, which typically causes discharge, is also common. And then there's nipple thrush. Thrush symptoms from breastfeeding cause the areola to flake, crack, and shine, along with itching and pain. These were all symptoms I was experiencing. Thrush of this kind can spread easily. If you're a breastfeeding parent, here's everything you need to know about nipple thrush.

How Is Thrush Passed From Child to Parent—and Vice Versa?

It's normal to have Candida in the mouth and digestive system, but because the immune system of young children is undeveloped and immature, fungal overgrowths are common—and this overgrowth can result in thrush. It can then be passed from a baby's mouth to the nursing parent's breast, chest, or nipple. "Nursing parents are more susceptible to this type of infection when they have cracks in their nipples due to nipple trauma," says Danika Severino Wynn, C.N.M., IBCLC, a midwife and lactation consultant with Maven, a telehealth startup based in New York.

The infection can also be passed through supplies, like breast pumps, pacifiers, and bottles, and nursing parents can develop a Candida infection on their nipples while taking antibiotics or steroids. This infection can then be transferred to their babies while breastfeeding.

What Are the Symptoms of Thrush When Breastfeeding?

If you're wondering what nipple thrush looks like, shiny, flaking skin on or around the nipple can be common. Bleeding may also occur.

How Is Nipple Thrush Treated?

Thrush can be uncomfortable, but good news is it's totally treatable. Antifungal medications are often prescribed, particularly nystatin, and breastfeeding parents are usually instructed to use a topical cream, such as miconazole or clotrimazole.

That said, it's important that both the breastfeeding parent and baby get on a treatment plan. "It's crucial that both the parent and infant are treated for thrush even if only one of them is experiencing symptoms," says Severino Wynn. "Treatment needs to continue for one to two weeks after symptoms resolve to ensure full resolution of thrush."

You'll also need to clean pacifiers, bottles, and breast pump parts thoroughly. "Make sure to wash the nipples and bottles in hot water or in the dishwasher after each use," says Preeti Parikh, M.D., a board-certified pediatrician, assistant clinical professor in the pediatrics department at Mount Sinai School of Medicine, and an American Academy of Pediatrics fellow and spokesperson. "If they're not clean, that can also cause thrush and/or reinfect baby with the fungal infection."

Should You Continue Breastfeeding with Thrush?

When it comes to nursing with thrush, it isn't only possible, it is completely and totally safe. "It is very important to continue breastfeeding," says Jackie Stone, M.D., an OB-GYN with Maven. But make sure to consult with your doctor about whether or not you should continue breastfeeding when using any specific medication or wait a bit after applying a topical cream. "It's dependent on the type of topical antifungal and if it can impact the health status of your infant. Usually it doesn't require waiting to breastfeed but it's unfortunately not a one-size-fits-all answer," says Severino Wynn.

And keep in mind, it takes time to completely resolve a Candida infection, so pain, discomfort, and/or itching may continue for weeks. As such, Dr. Stone suggests seeing a lactation consultant. And La Leche League suggests you "offer your baby short, frequent feedings, beginning on the least painful breast." Pumping is also an option to consider. 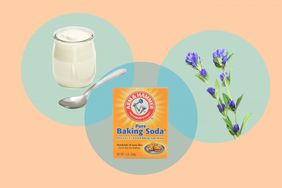 5 Home Remedies for Thrush in Babies 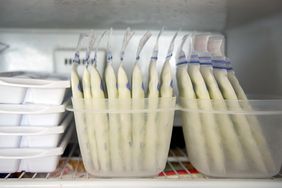 I Had High Lipase Milk—Here’s What That Means