Is Breast Milk the New Botox?

You don’t need a fancy salon for the breast milk facial of your dreams—just follow these tips at home to turn mother’s milk into a beauty craze that’s actually worth the hype.

When I found out that that breast milk facials were a thing, my first two thoughts as a nursing mom were: A) Is this some kinky fetish sort of thing? and B) How much should I start charging? As it turns out, the beauty treatments were all the rage at a spa—now called Clean Your Dirty Face—in Chicago up until 2017. Sourcing screened liquid gold from a local milk bank as a $40 service for clients looking to get their skin as smooth as a baby's butt, the breast milk facial quickly gained popularity, becoming a weekly staple for those with acne-prone skin, says Shama Patel, founder and CEO.

Intrigued, I made an immediate appointment with Dr. Google, who confirmed that topical use of breast milk does, indeed, possess antibacterial and antiseptic qualities. Despite the fact that this information appeared mostly on blogs with names like "Hobo Mama," there's something to it: Plenty of us parents have used breast milk to clear up our infants' acne, unplug clogged tear ducts, and soothe eczema. (Tip: Application accuracy vastly improves with a bottle and dropper rather than a bazooka-style point-and-shoot method.)

6 Surprising Ways to Use Breast Milk

Apparently, breast milk is also high in a type of fat called lauric acid—also a component of coconut oil, the current darling of the holistic health world—which has been shown in animal studies to combat acne.

Upon learning my body was functioning as an unlicensed Clearasil factory, I decided to play at-home aesthetician and give myself a facial—the only beauty treatment I've had time for in nine postpartum months, not counting the baby powder I sprinkle in my hair on a daily basis and count as a blow out.

First, I grabbed a bottle of chilled milk from the fridge along with a spoon. I washed my face and patted it dry with a clean pair of Dora the Explorer toddler underwear, because I haven't done laundry in ages.

Then I used a spoon to scrape away the fatty milk that clings to the sides of the bottle and gently smeared it across my forehead, cheeks, nose, and chin. (Pro tip: "Adding a couple drops of lavender oil helps with the smell, and the overall masking experience," says Patel.) I also patted some in the space where my rested eyes used to be, now known as my "black holes of motherhood." I then spent my 10 minutes of facial downtime arguing with an Amazon representative about an erroneous charge for a box of KIND bars.

As the milk dried, my skin felt a bit tight, but not unpleasantly so; more like in a "It's doing something!" way than anything uncomfortable. When I rinsed it off, it felt super silky and slippery against my skin, kind of like a rich eye gel. Afterwards, my skin remained a bit greasy, but again, not in a bad way; with this arctic winter, it felt nice to not be able to scratch the word "D-R-Y" across my cheeks with my fingernail.

Overall, using my own breast milk as a face cream felt delightfully MacGuyveresque and smartly utilitarian. I imagine this is what homesteaders feel like when they're able to turn a $1.50 box of baking soda into a week's worth of bug bite paste, teeth whitener, refrigerator cleaner, antacid, and chocolate chip cookies. I'm thinking of emailing the folks at Goop to give them a heads up—Gwyneth would so totally get a breast milk facial with her weekly vaginal steam.

Everything You Need to Know About Breast Milk Color 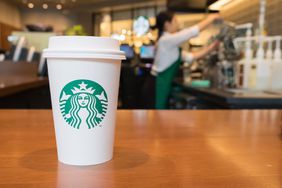 Could This Drink From Starbucks Boost Your Breast Milk Supply?

Can You Get a Tattoo or Piercing While Pregnant?