Not only does breastfeeding boost your baby’s physical and mental development, it also protects your own health. Here, we break down the advantages of breastfeeding for Parent and Baby.

Reduced ear infections? Check. Lower risk for asthma? Yup. Bump in IQ? Sure. Breastfeeding your baby brings all these advantages, plus a whole lot more, which is why the American Academy of Pediatrics (AAP) recommends exclusive breast/chestfeeding for 6 months. Newest updates to these guidelines recommend offering support for parents who want to provide human milk until the child is 2, even after solid foods are introduced. That said, if you need or want to bottle-feed or formula-feed your infant, those are great options as well.

Keep reading to learn about the advantages of breastfeeding for Parent and Baby.

Benefits of Breastfeeding for Baby

Breast milk is nature's perfect baby food. It contains immunity-boosting antibodies and healthy enzymes that scientists have yet to replicate. Here are some advantages of human milk for babies.

Provides your baby with colostrum in the first few days. Formula isn't able to change its constitution, but your breast milk morphs to meet your baby's changing needs. Colostrum—the "premilk" that comes in after you deliver—is chock-full of antibodies to protect your newborn baby. "It's also higher in protein and lower in sugar than 'full' milk, so even a small amount can hold off your baby's hunger," says Heather Kelly, an international board-certified lactation consultant in New York City and a member of the Bravado Breastfeeding Information Council's advisory board.

Gives your baby's digestive system a break. When your full milk comes in (usually three to four days after delivery), it's higher in both sugar and volume than colostrum—again, just what your baby requires. "He needs a lot of calories and frequent feedings to fuel his rapid growth," Kelly explains. "Your mature milk is designed to be digested quickly so he'll eat often." The proteins in cow's milk formula as well as soy milk formula are tougher for an infant's body to break down than those in breast milk, so the longer you can put off the transition to formula, the better.

Protects against allergies and eczema. If there's any history of allergies or eczema in your family, it may be especially beneficial to breast/chestfeed. Proteins in cow's milk and soy milk formulas can stimulate an allergic reaction, while the proteins in human milk are more easily digested.

Causes less stomach upset, diarrhea, and constipation than formula. This is also because breast milk is so easy for your baby's body to break down

Reduces the risk of viruses, gastroenteritis, ear infections, and respiratory infections. "The incidences of pneumonia, colds, and viruses are reduced among breastfed babies," says infant-nutrition expert Ruth A. Lawrence, M.D., a professor of pediatrics and OB-GYN at the University of Rochester School of Medicine and Dentistry in Rochester, New York and the author of Breastfeeding: A Guide for the Medical Profession. That's because breast milk is loaded with antibodies that protect your little one after birth. Formula-fed infants are also more likely to suffer from ear infections than breastfed babies, as well pneumonia and lower respiratory-tract infections.

Lessens the risk of SIDS. Although the connection is unclear, breastfed infants account for fewer sudden infant death syndrome (SIDS) cases than formula-fed infants do.

Protects against diseases such as type 1 and type 2 diabetes. According to the American Diabetes Association, "Breastfed babies have lower risk of developing type 1 diabetes and becoming overweight or obese later in life, which is a risk factor for type 2 diabetes."

How Long Should You Breastfeed? As Long As You Can

Promotes the health of premature babies. If you breastfeed your premature baby, it could protect them from necrotising enterocolitis (NEC), sepsis, chronic lung disease, and other fatal conditions.

May make your baby smarter. Research is still inconclusive, but studies are pointing toward breastfed babies having higher IQ scores later in life, even when taking socioeconomic factors into consideration. The fatty acids in human milk are thought to be the brain boosters.

Could help prevent obesity. Some studies show that breastfed infants are less likely to be obese later in life. One theory is that nursing parents get in tune with signals that their baby is full and don't overfeed. "You have to read your baby's 'satiety cues' a little better, because unlike with a bottle, you can't see how much he's eaten. You have to rely on your own instincts and your baby's behavior to know when your baby is full," says Kelly.

Brings your baby close to you. Bottle-fed babies form bonds with their parents too, of course, but the skin-to-skin contact of breast/chestfeeding is reassuring to a newborn.

Gives a smooth transition to starting solids. Babies don't go from all-milk meals straight to all baby cereal and mush—the gradual switch will last from age 4 to 6 months through their first birthday. Continuing with breastfeeding while your baby begins solids can cut down their risk of developing allergies, including food allergies. Using your breast milk to mix your baby's cereal gives them familiar flavors, and breastfeeding first thing in the morning and last thing in the evening gives them a calming (and nutritious) ritual.

Benefits of Breastfeeding for Parent

The benefits of breastfeeding don't only extend to your baby. As it turns out, nursing also has some advantages for the one producing milk, including the ones listed here.

Lowers your risk of breast and ovarian cancer, as well as other diseases. Studies show that cisgender women who breastfeed have less risk of these cancers later in life. Also, breastfeeding has been associated with a decreased prevalence of heart disease, diabetes, high blood pressure, high cholesterol, and arthritis.

Helps you lose pregnancy weight. Because milk production burns about 300 to 500 calories a day, lactating parents tend to have an easier time losing pregnancy weight in a healthy way—that is, slowly and without dieting. "Breast milk contains 20 calories per ounce. If you feed your baby 20 ounces a day, that's 400 calories you've swept out of your body," says Dr. Lawrence.

Triggers your uterus to shrink back to pre-pregnancy size. The oxytocin released when your baby nurses helps your uterus contract, reducing post-delivery blood loss. Plus, chest/breastfeeding will help your uterus return to its normal size more quickly—at about six weeks postpartum, compared with 10 weeks if you don't breastfeed. In fact, in the first few weeks, you might feel mild contractions while you're nursing.

May lower your risk of osteoporosis. According to Dr. Lawrence, cisgender women and people assigned female at birth who breastfeed have a lower risk of postmenopausal osteoporosis. "When a woman is pregnant and lactating, her body absorbs calcium much more efficiently," Dr. Lawrence explains. "So while some bones, particularly those in the spine and hips, may be a bit less dense at weaning, six months later, they are more dense than before pregnancy."

Gives you less time off work. Your breastfed baby might be ill less often, so that means fewer sick days for you.

Delays menstruation. Breastfeeding your baby around the clock—no bottles or formula—will delay ovulation, which means delayed menstruation. "Breastfeeding causes the release of prolactin, which keeps estrogen and progesterone at bay so ovulation isn't triggered," Kelly explains. "When your prolactin levels drop, those two hormones can kick back in, which means ovulation—and, hence, menstruation—occurs." Even if you breastfeed exclusively, your prolactin levels will eventually drop over the course of several months. Many parents who solely nurse will see their periods return between six and eight months after delivery, Kelly adds; others don't for a full year.

Can give you some natural birth-control protection. Granted, it's not as reliable as the pill or most other forms of birth control, but breastfeeding can keep you from ovulating if you follow these guidelines: Your period must not have resumed; you must breastfeed at least every four hours around the clock; you must not give your baby any pacifiers, bottles, or formula; and you must be less than six months postpartum. According to Kelly, nighttime feedings are the most important to the "lactation amenorrhea method," so do not let your baby (or yourself) sleep through a feeding. "Going long stretches at night without nursing seems to be directly responsible for the return of ovulation," she says. Prematurely sleep training your baby can also hasten ovulation.

Gives you closeness with your baby. Most parents cite this as the biggest benefit of breastfeeding. Nursing is something special the two of you share. You and baby exchange looks, noises, and cuddles during a nursing session, and communicate love to each other. "It's empowering as a new [parent] to see your baby grow and thrive on your breast milk alone," Lawrence says.

Saves money. Chest/breastfeeding is essentially free. Even if you choose to buy an electric pump, a nursing pillow, and several nursing bras, you'll still only spend about half the cost of a year's supply of formula. The cost savings extend beyond your household, too. According to a study published in the journal Pediatrics, the United States would save about $13 billion per year in medical costs if 90 percent of U.S. families breastfed their newborns for at least 6 months.

How to Wean Your Baby Off Breastfeeding

Makes you more eco-friendly. Dairy cows, which are raised in part to make infant formula, are a significant contributor to global warming: Their belching, manure and flatulence (really!) spew enormous amounts of methane, a harmful greenhouse gas, into the atmosphere.

Updated by Carole Anderson Lucia
Was this page helpful?
Thanks for your feedback!
Tell us why!
Related Articles 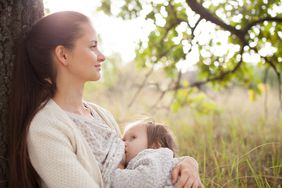