Some breastfeeding parents are diluting their breastmilk with previously pumped breastmilk. Here's why "pumping and diluting" is unnecessary.

Among the many superhuman powers new parents seem to assume after giving birth, the ability to create liquid gold—a.k.a. breastmilk—is among the most revered. That's why the idea of pouring this precious commodity down the drain is unthinkable, even if it is supposedly tainted with alcohol. Some people have turned to diluting pumped milk after drinking alcohol instead.

However, the truth is, you don't need to ditch or dilute breastmilk if you drank alcohol, as long as you drank in moderation. According to the Centers for Disease Control and Prevention (CDC), one standard alcoholic drink per day (12 ounces of 5% beer, 8 ounces of 7% malt liquor; 5 ounces of 12% wine; or 1.5 ounces of 40% (80 proof) liquor) is not known to be harmful to the baby.

Rather than dumping or diluting pumped breastmilk, the CDC advises breastfeeding parents to simply wait at least two hours after a single drink before nursing again. The CDC does not suggest that parents who consume an alcoholic beverage stop breastfeeding. Learn more about why you don't need to dilute your pumped breastmilk after drinking alcohol—and what to do instead.

Can You Drink Alcohol While Breastfeeding?

When Can You Breastfeed Again After Drinking Alcohol?

Just like alcohol eventually leaves the bloodstream, it will also leave your breastmilk. So, if you've waited two hours after having one drink, your breastmilk should be free of alcohol and you can start breastfeeding again. Additionally, it's key to tune in to how you feel. If you're feeling tipsy, you'll want to wait longer. If you feel totally normal, breastfeeding should be safe.

"In general, if you are sober enough to drive, then you are sober enough to breastfeed," says New York-based lactation consultant Leigh Anne O'Connor. Timing and food consumption aren't the only factors to take into account when deciding if your milk is safe for your baby. O'Connor also recommends considering details such as the age of your baby, your metabolism, and exactly how much you've had to drink.

What Does it Mean to "Pump and Dilute"

The CDC says that if you express or pump milk within two hours of consuming one alcoholic beverage, you should discard the expressed milk. Parents looking for other options are turning to friends and social media for advice. Enter the idea of "pumping and diluting," an alternative to the practice of "pumping and dumping," in which breastmilk pumped after drinking is diluted with previously pumped, alcohol-free breastmilk—as opposed to dumping it down the drain.

It's hard to trace the origin of this practice, but Emily Bernard, a lactation consultant and founder of Before and After Baby breastfeeding support service, says it may have started in online forums.

"The thought of blending pumped 'clean' breastmilk with breastmilk that is pumped and contains any substance, including alcohol, is one of those items that has caught wave in a lot of online moms groups," she says. "Sadly, it is not based in any type of science. Many moms also feel that pumping reduces the amount of alcohol within their breastmilk when in reality time is what does."

According to the U.S. National Library of Medicine's Toxicology Data Network, the highest alcohol levels in milk can be found a half hour to an hour after consuming alcohol, although food can delay the peak levels.

Is it Safe to Pump and Dilute?

Gladys Vallespir Ellett, the nurse coordinator for lactation services at NYU Langone, suggests steering clear of diluting altogether. "Because there are no recommendations regarding dilution of breastmilk with pumped breastmilk, it is not a practice that I would recommend," she says. "Rather than place restrictions and discourage women who are breastfeeding, I believe it is important for a woman to understand the recommendations so she can make decisions that are safe and that meet her desire to enjoy an occasional alcoholic drink."

That may be easier said than done, as recommendations vary between different organizations. Guidelines for how much a breastfeeding parent can safely drink vary between the CDC and the American Academy of Pediatrics. And online forums are a free-for-all that would make anyone's head spin. But Ellett notes that nursing right after one to two drinks can negatively impact an infant's ability to transfer milk, increase agitation, and cause sleep disturbances.

Ultimately, the act of pumping and diluting breastmilk may just be an unnecessarily complicated step for a potentially inebriated mother—especially if they're still attempting to feed their baby with the hybrid milk. "The danger to dilution is there is no way to measure how much alcohol is in the breast milk versus what it is being mixed with," Bernard says.

Here's Why Some Parents are Exclusively Pumping Breastmilk

"The idea is to not get drunk," O'Connor says. "There are risks to caring for a baby while impaired, beyond alcohol in breastmilk—which metabolizes out of milk as it does out of blood. Generally speaking, a breastfeeding parent can enjoy the occasional drink without pumping and dumping."

The bottom line is that if you're not comfortable breastfeeding your baby after drinking, it's better to feed them either previously pumped milk or formula—or to ask someone else to do it for you. Only "pump and dump" if you're experiencing discomfort. 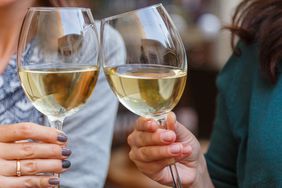 Can You Drink Alcohol While Breastfeeding?