Although the American Academy of Pediatrics advises against co-sleeping, it adjusted its sleep guidelines to acknowledge that parents sometimes fall asleep in bed with their babies. Here's what you need to know.

Historically, the American Academy of Pediatrics (AAP) has strongly discouraged bed-sharing with infants younger than 1, since the practice puts babies at risk for suffocation, strangulation, and parent rollover. But as many as 60 percent of parents admit they bed-share with their babies at least sometimes (usually during or after a late-night feeding).

While the AAP still advises against bed-sharing, the organization now recognizes that bed-sharing happens, and they want to help parents do it safely by offering co-sleeping guidelines. "We know that parents may be overwhelmed with a new baby in the home, and we want to provide them with clear and simple guidance on how and where to put their infant to sleep," said Rachel Moon, M.D., FAAP, lead author of a 2016 AAP report called "SIDS and Other Sleep-Related Infant Deaths: Updated 2016 Recommendations for a Safe Sleeping Environment."

The current AAP policy statement still emphasizes the importance of safe baby sleep basics like putting babies to sleep on their backs and not placing anything inside the crib other than a tight-fitting bottom sheet. The report adds that babies should sleep in the same room as their parents for six months, and optimally a year. Room-sharing (not bed-sharing) decreases a baby's chance of sleep-related death by as much as half.

What Age is Co-Sleeping Safe?

Co-sleeping comes with a risk for babies. Data compiled by NPR suggests that a newborn has a 1 in 46,000 chance of death while sleeping in a crib in the parent's room (which is the practice recommended by the AAP). However, the same baby has a 1 in 16,400 chance of dying from SIDS in a parent's bed. If the baby is high risk, the likelihood increases even more to 1 in 150.

Bed-sharing is dangerous because parents can accidentally roll onto their baby, causing injury or suffocation. Soft objects, such as pillows or blankets, can also lead to strangulation and suffocation throughout the night.

Babies under four months of age are most at risk for death, according to the AAP—and so are infants who were born prematurely or with a low birth weight. The risk of bed-sharing death also increases in the following circumstances: someone in bed is a smoker, the mother smoked during pregnancy, or a parent has impaired alertness from drugs, alcohol, or medication. There's also a greater chance of death if someone in bed isn't the baby's parent.

Given this information, parents must weigh the risks and benefits when considering a safe co-sleeping age for their child.

It's important to note that the AAP is not encouraging bed-sharing, and recommends that babies sleep in their own beds, in parents' rooms. And parents should always aim to follow safe infant sleep practices, because the truly devastating reality, in addition to the fact that we sometimes can't keep our eyes open, is that 3,500 infants die annually from sleep-related death.

That said, here are the AAP's guidelines for safe co-sleeping practices.

Lori Feldman-Winter, M.D., FAAP, member of the Task Force on SIDS and co-author of the report emphasizes these tips. "If you are feeding your baby and think that there's even the slightest possibility that you may fall asleep, feed your baby on your bed, rather than a sofa or cushioned chair. If you do fall asleep, as soon as you wake up be sure to move the baby to his or her own bed," she says.

How to Stop Co-Sleeping with Your Children

"There should be no pillows, sheets, blankets, or other items that could obstruct the infant's breathing or cause overheating," Dr. Feldman-Winter adds. 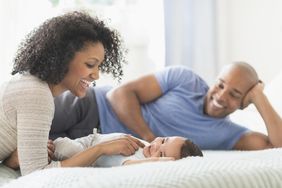 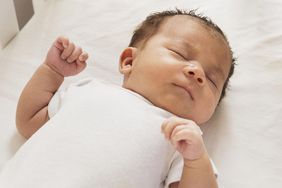 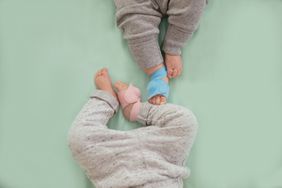